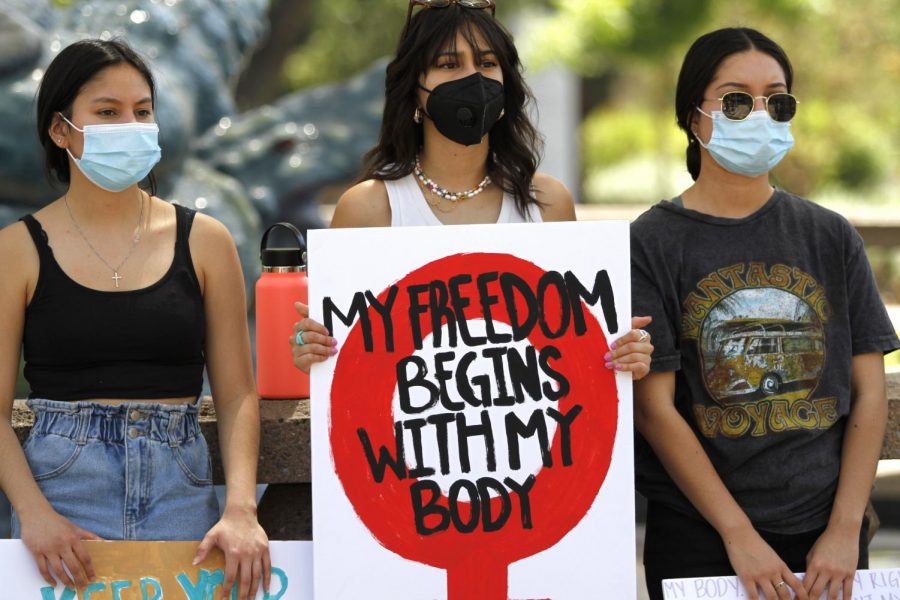 A woman’s march protesting the right to have an abortion was held on June 6th, 2021

The law took effect Wednesday, Sept. 1, when the U.S Supreme Court, in a 5 to 4 vote, denied an emergency appeal by Texas abortion providers to block the new state law.

“Taken together, the Act is a breathtaking act of defiance – of the Constitution, of this Court’s precedents, and of the rights of women seeking abortions throughout Texas,” Justice Sonia Sotomayor wrote in her dissent. “The Court’s order is stunning.”

The new Texas law is one of the strictest in the nation, which bans abortions before many women know they are pregnant.

“No freedom is more precious than life itself. Starting today, every unborn child with a heartbeat will be protected from the ravages of abortion,” said Texas Gov. Greg Abbott via Twitter.

“Enforcing SB8 further enforces the idea that a pregnant person somehow has less rights than a 6-week-old fetus,” Herrera said. “Taking away someone’s right to choose is wrong, and we need to think about the law not only as a ban on abortion but as a ban on decision making.”

Herrera has attended several rallies at the state capitol to voice her opposition and spread information and resources about abortion funds statewide.

“Banning abortion simply bans safe abortions after those six weeks are up; this bill is not about safety or about protecting fetuses, it’s about control,” said Herrera.

Southwest Coalition for Life, a nonprofit organization that focuses on uniting the pro-life community in El Paso and Southern New Mexico, believes the SB8 bill is a big step in the right direction in protecting the right of life.

“We are now more committed than ever before to rallying the community to compassionately empower women and couples facing unexpected pregnancies to be heroes of their circumstances,” said Mark Cavaliere, executive director of Southwest Coalition for Life.

According to Texas abortion providers and advocates, the new law prohibits abortion care for at least 85% of Texas patients and forced many abortion clinics to close.

“This law most certainly affects women’s rights. The government will now have control over them, and with this new law being enforced, several women could end up hurting themselves by having an illegal abortion, or worse, harm themselves just to lose the embryo,” said Kimberly Diaz, 22, a UTEP student.

The bill prohibits abortions after an ultrasound detects a fetal “heartbeat.” There is no exemption for rape or incest, only for medical emergencies.

“Texas will always defend the right to life,” Abbott wrote on Twitter.

According to The American College of Obstetricians and Gynecologists, the term fetal “heartbeat” is misleading because embryos do not possess a heart at that time of the development stage.

“This extreme Texas law blatantly violates the constitutional right established under Roe v. Wade and upheld as precedent for nearly half a century,” President Joe Biden said in a statement. “The Texas law will significantly impair women’s access to the health care they need, particularly for communities of color and individuals with low incomes.”

“Reproductive justice is a right, and no one should have to struggle and fear for their wellbeing if they want to get an abortion,” said Herrera. “One of my favorite statements is that ‘Roe is the floor, not the ceiling’ because it is absolutely true. Women should have the freedom to make their own decisions about their bodies no matter where they live.”

The new abortion law relies on private citizens to enforce the law rather than the government. Private citizens can sue abortion providers or anyone that helps a woman get an abortion after six weeks and receive a $10,000 cash reward if successful.

“This new law will endanger patients and clinicians, putting physicians who provide necessary medical care, or even offer evidence-based information, at risk, by allowing private citizens to interfere in women’s reproductive health decision making,” said The American College of Obstetricians and Gynecologists in a press release. “This law virtually eliminates women’s access to evidence-based, comprehensive care and information, and denies women their right to make decisions about their own health.”

Rideshare companies like Uber and Lyft announced they will pay for their drivers’ legal fees if they are sued under the new Texas abortion law.

“The Biden-Harris Administration will always fight to protect access to healthcare and defend a woman’s right to make decisions about her body and determine her future,” Vice President Kamala Harris said in a statement.

The Justice Department filed a lawsuit against Thursday, Sept. 9, against the state of Texas over the new state abortion law, calling it “unconstitutional.”

“The Act is clearly unconstitutional under longstanding Supreme Court precedent,” said Attorney General Merrick Garland. “The United States has the authority and responsibility to ensure that no state can deprive individuals of their constitutional rights through a legislative scheme specifically designed to prevent the vindication of those rights.”

Both Herrera and Diaz are pleased with how Biden’s administration has responded to the new law, and they are hopeful they will continue to fight for women’s reproductive rights.

“The Biden Administration’s response was well-structured and effectively showed SB8 for what it is; senseless,” Herrera said. “I remain hopeful that his administration will do everything in their power to ensure access to safe and legal abortions in Texas and the nation.”

The Texas State Legislature also passed Senate Bill 4, which would prohibit access to abortion-inducing pills like misoprostol to patients who are more than seven weeks pregnant. The bill still needs to be signed by Gov. Abbott.

Across the southern border of Texas, Tuesday, Sept. 7, the Supreme Court in Mexico voted to decriminalize abortion, a landmark that legalizes abortion across the country.