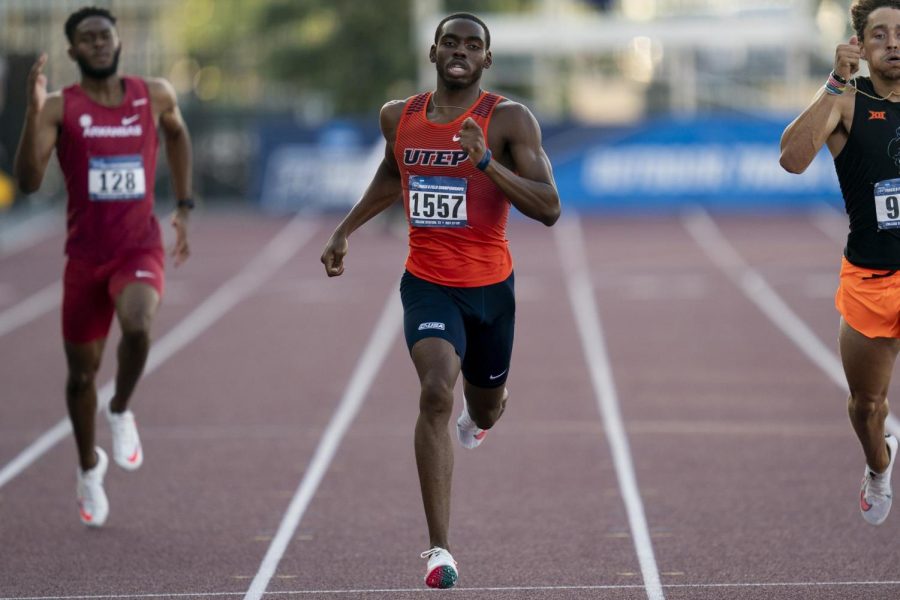 UTEP sprinter Sean Baily is representing his native country of Jamaica at the 2021 Tokyo Olympics in the 400 meter dash.

With the Tokyo Summer 2021 Olympics beginning July 23, some UTEP alumni, current and future UTEP students are looking to come back home with the gold.

The Summer Olympic Games are an international multi-sport event that occurs once every four years in different parts of the world each year. The Olympics were originally set to take place in 2020 but were delayed a year due to COVID-19.

Tobi Amusan will be competing in the 2021 Olympic games in the women’s 100-meter hurdles for the Nigerian National Olympic team. Amusan is a former member of the UTEP Track and Field team and a former UTEP volunteer coach. Amusan is a two-time Olympian as she also advanced to the 2016 summer games in Rio de Janeiro when she was a freshman at UTEP. Amusan was a two-time All-American, first team and second team while at UTEP and holds UTEP’s record in the 100-meter hurdles (12.57) and 200-meter dash (22.92).

Ned Azemia will compete in the 2021 Olympic games in the men’s 400-meter hurdles and will represent his home country of Seychelles. Azemia is a current UTEP student and a two-time Olympian, as he also competed in the 2016 Summer Olympics in Rio de Janeiro. Azemia is a record holder in his country for the 400-meter hurdles with a 49.88.

Sean Bailey will compete in the 2021 Olympic games in men’s 400-meter dash and 4×400-meter relay representing his home country of Jamaica. Bailey is a UTEP graduate and a first-time Olympian; he comes from a long line of track and field superstars, as his sister Veronica Campbell Brown is an eight-time Olympic medalist with three gold medals under her belt. Bailey was an All-American and won three gold medals and a bronze medal at the 2021 Conference USA Championships. Bailey also won the 400-meter dash at the Jamaican track and field trials with a time of 45.04.

Loubna Benhadja will compete in the 2021 Olympic games in the women’s 100-meter dash and will represent her home country of Algeria. Benhadja is a future Miner, as she recently signed a national letter of intent to compete with the Miners.

Emmanuel Korir will compete in the 2021 Olympic games in the men’s 400-meter and 800-meter dash and will represent his home country of Kenya. Korir is a UTEP Alumnus; as a freshman, he set the world record in the 600-meter with a time of 1:14:97 in 2017. At the UTEP invitational outdoor, Korir broke the school and meet record, setting a time of 44.67. Korir currently ran the second fastest 800-meter dash two weeks before the Olympics.

Churandy Martina, UTEP Alumnus, is no stranger to the Olympic games as he is now a five-time Olympian. Martina will compete in the men’s 4×100-meter relay representing the Netherlands. Martina was a three-time All-American and recently claimed bronze at the 2018 European Championships in the 4×100-meter relay in Berlin, Germany.

Lastly, UTEP Alumnus Michael Saruni will compete in the 2021 Olympic games in the men’s 800-meter dash, representing his home country of Kenya. During his time at UTEP, Saruni was a two-time All-American. At the Texas Relays, Saruni set the meet record of the fastest time in the nation with a 1:45.82, beating the 2012 Olympic silver medalist Leonel Manzano and the collegiate record holder Donavan Brazier. At Kenya’s track and field trials, Saruni won the 800-meter dash with a time of 1:45.81.

“It’s always exciting to have so many of our former student-athletes and, in this case, a current student-athlete and one we just signed competing in the Olympics,” said UTEP Athletics Track and Field Head Coach Mika Laaksonen. “I feel like this group of former UTEP student-athletes at the Tokyo Olympics is very potent with three to four true medal contenders in it.”

UTEP has a total of 15 Olympic medal winners, two gold, five silver and eight bronze. The 2021 Olympics begin July 23 and end on Aug. 8.