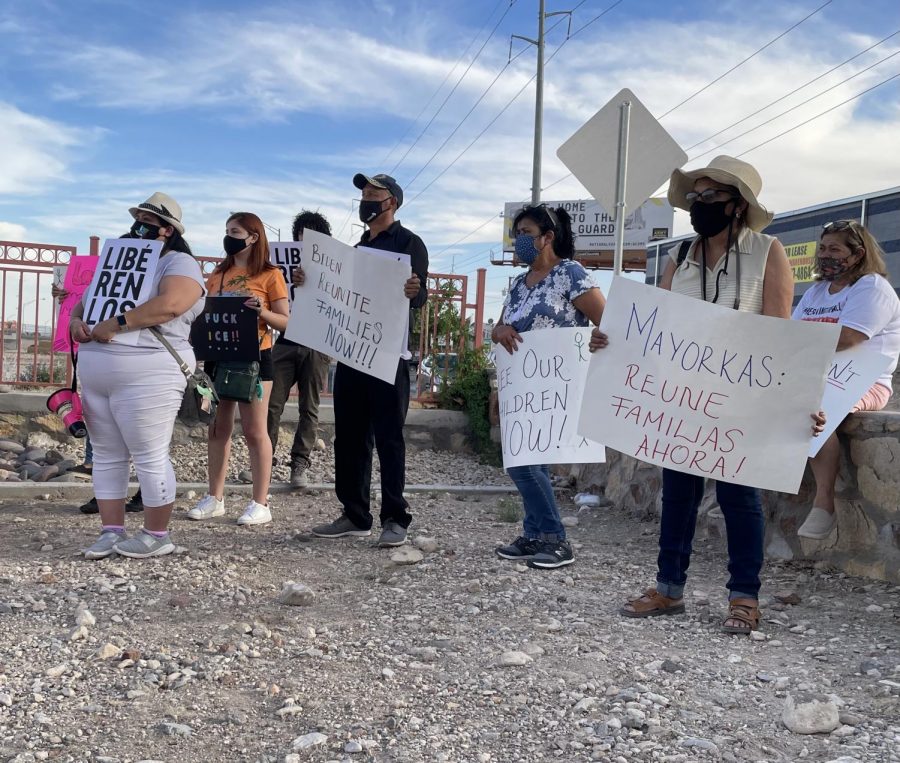 Protesters hold signs during a rally at Jorge Almada Park across from Ft. Bliss June 8, 2021.

On June 8, protestors and groups, including the Border Network for Human Rights, Coalition to End Child Detention, in addition to Reform Immigration for Texas Alliance, gathered to protest the 4,000 unaccompanied migrant children being held at the detention center located at Fort Bliss.

“Libéren a los niños,” Adriana Cadena, managing director for Reform Immigration for Texas Alliance, had a crowd of people chanting in unison at Jorge Almada Park, located across the freeway from one of Fort Bliss’ entry posts. “Free the children,” they demanded.

The local chapter of the Sunrise Movement in El Paso claims that these children are living in extreme conditions where they are being exposed to carcinogens and other harmful chemicals.

“When children are in these detentions, it causes harm, long-term harm, so we cannot ignore the situation and we should not accept that,” Fernando Garcia, executive director for the Border Network for Human Rights said.

There have been reports that these centers are inadequate spaces to keep children due to overcrowding and  limited access to toiletries such as toothpaste or soap. Other reports have also said children have been found sleeping on concrete floors where adults may have to stand for days due to the lack of space. With such extreme conditions, children are at risk of contracting diseases and illnesses, such as lice, the flu and chickenpox.

Protestors and groups demand that this post on Fort Bliss is permanently closed. “Here inside of the camps, there are thousands of children, it is a strong military base, so how can we can be OK with the danger these children are placed,” Garcia said. “The first thing we are asking is that this detention center closes immediately.”

Diana Martinez, a co-founder of Coalition to End Child Detention, said that family members of the children at the post are asking about where they are being held, to which facilities do not respond.

“It’s not a shelter; it’s incarceration because there’s no transparency,” Martinez said about the children being held on Fort Bliss. “This is a continuation of what has gone on under Trump (Administration).”

According to Martinez, when children are processed at the centers, they only have 10 minutes to speak with a family member, twice a week. In order to be able to make more phone calls, children have to communicate with their child care workers stating that they are mentally unstable.

Martinez said that children are now being held at Fort Bliss because it makes it harder for people to protest and witness outside the center.

The number of unaccompanied migrant children being taken into custody by U.S. Customs and Border Patrol doubled within the first two months of the Biden Administration. A total of 9,271 children were held by CBP in Feb. 2021, having jumped to 18,663 in March 2021.

In May 2021, the Biden Administration considered expanding the Fort Bliss facility to maximum capacity, which could hold up to 10,000 children under the age of 12.

“It is unfair; it’s an embarrassment that with a wealthy country and a president that promised to do things differently, they are doing the same thing as before,” Cadena said about the Biden Administration. “It doesn’t matter if they are Republicans or Democrats, they are trapping our children and they need to be with their families.”

Rosemary Rojas, of the Border Agricultural Workers Project, said that U.S. immigration policy forces migrants to leave due to the U.S. interfering with their home countries.

Martinez said that there needs to be more regulation in taking care of unaccompanied migrant children. “Smaller facilities might be more appropriate where they can handle the logistics of taking care of children and also reuniting the children,” Martinez said. “We need to abide by the Flores Settlement Agreement.”

The Flores Settlement Agreement requires that minors who are taken into custody by U.S. Customs and Border Patrol must be taken to a facility that meets specific standards. The agreement calls for the least restrictive settings based on children’s age and special needs, a notice of rights, sanitized facilities, and adequate food and water supply. “A military base is not the least restrictive environment,” Martinez said.

Martinez said that she would continue to bring awareness among the many other groups that participated in the protest until they see changes for these unaccompanied migrant children. “If you believe in human rights, you cannot be silent about it,” Martinez said.

Nicole  Lopez can be reached at [email protected]; @nicoleilopez on Twitter.