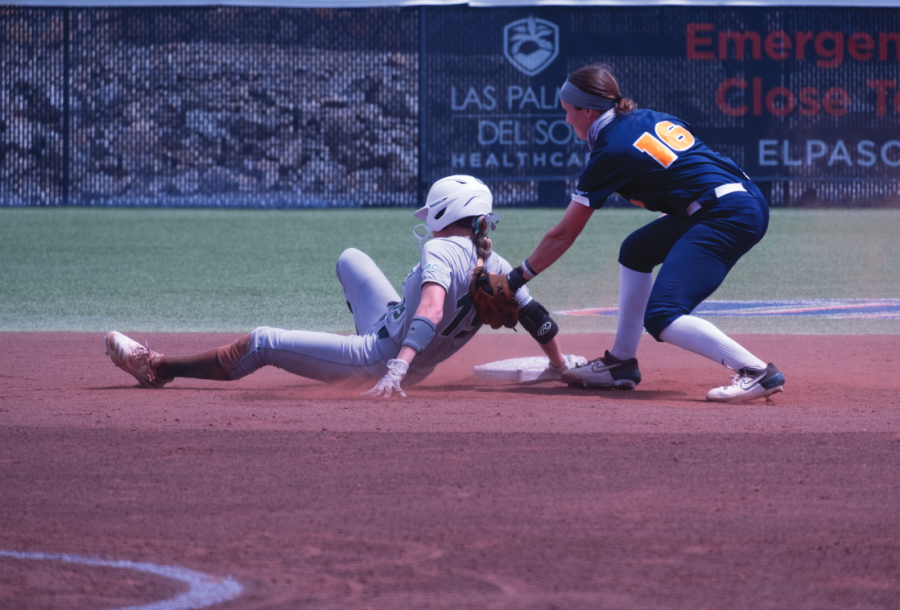 UTEP junior Pate Cathey just misses a putout on a close play at second base versus Utah Valley May 2, 2021.

In the bottom of the second inning, the Miners scored its first runs of the game. Graduating seniors Bryanna Molina and Illena Santos led off with back-to-back singles setting up two runners in scoring position. Sophomore catcher Katrina Somoza then proceeded to hit her first home run of her career of former Miner pitcher Devyn Cretz, driving in three runs to give the Miners an early 3-0 lead.

After a one-out double by Utah’s Madison Carr, junior third baseman Kasey Flores overthrew first base for her 11th error of the season, setting up a runner on first and third with one out. On the very next at-bat, Utah Valley scored a run on a sacrifice fly before being retired for the inning. At the top of the third, the Miners were up 3-1.

To start out, the Miners’ inning freshman Lexi Morales was able to draw a walk followed by a single from its leading hitter, sophomore outfielder Idalis Mendez. With two players on base Flores was able to earn a base on balls to load the bases. Molina came to bat and hit a sacrifice liner to the right-field, bringing home a run for the Miners.

An error on junior Pate Cathey’s at-bat scored another run for the Miners giving the team a 5-1 lead. With her second hit of the day, Somoza drove in two runs on a center field single that was followed by back-to-back sacrifice flies by Valles and Molina. At the end of four innings, the Miners would have a seemingly insurmountable 9-1 lead.

“The first couple of times through the lineup, I thought we were really locked in and doing what we needed to do to give ourselves those opportunities,” UTEP coach T.J Hubbard said. “And on top of that, we scored with a runner in scoring position. I felt like even if we didn’t score that at-bat, we at least moved someone up (a base) and advanced someone to pass the bats to the next teammate.”

Utah Valley started the fifth inning with a bang as first baseman Peyton Prigge sent a lead off homer over the right-field wall. On the next play, Flores committed her second error of the game and 12th of the season, putting a second base. Another run would score on an infield sacrifice, leaving the Wolverines trailing 9-3 after five innings.

Miner’s coach Hubbard, swapped players around, putting Zaylie Calderon at pitcher. Continuing to chip away, the Miner lead the Wolverines put together three straight hits to load the bases with one out. UTEP survived the bases loaded and held Utah Valley to only two more runs, maintaining a 9-5 lead with one inning remaining.

Flores came to bat and hit a one-out homer for the Miners, extending the lead to 10-5. For Flores, it was her Miner leading seventh home run and 21st run batted in of the season.

Once again, Hubbard switched Calderon and Isabella Kelly, today’s starter, back at pitcher to begin the seventh and final inning. Kelly surrendered one walk but struck out the next player looking to put the Miners’ one out away from a hard-earned victory. A third error by Flores at third base gave the Wolverines a runner in scoring position at second base.

Utah Valley’s Kyla Hardy was able to take advantage of the fielding mistake by hitting a double to center field scoring two runs for the Wolverines.

Prigge produced another pressure hit for the Wolverines and advanced to second base. On the next bat on a single from Utah Valley, the Miner’s fell victim to another error that put the tying run in scoring position at second. Kelly was able to force a ground out to close the game and secure the tight 10-9 victory.

For the Miners, the star of the day was Somoza, with a career day driving in five runs that were key to the UTEP win. Coming into today, Somoza had struggled at the plate and was hitless over her last eight games while batting .177 for the season. Somoza had her first multi-hit game and home run in the game.

“I thought we had some good offensive performances in the first half of the game, giving ourselves an opportunity to be up 9-1,” Hubbard said. “I think (sophomore pitchers Isabella Kelly and Zaylie Calderon) did what they needed to do pitching-wise in the circle to keep us competitive. We have to be able to make some better plays defensively and try to limit the damage in those bigger innings.”

After winning this nonconference match, the Miners’ playoff picture is clearer since Louisiana Tech (22-25, 10-6) clinched the third seed in the West Division of the Conference USA Tournament that will be held in Bowling Green, Kentucky.

UTEP will play for one of the two Wild Card seeds of the C-USA Tournament that are for the two teams with the highest winning percentage of any division.

Now the UTEP softball team will go on the road to face UTSA (11-29, 5-11) May 7-9 with the chance of winning at least three of its four games and combine these results with others from FAU, WKU and FIU. This series at San Antonio has, of course, playoff implications on the line for its final regular-season road games of the year.

Heriberto Perez and Michael Cuviello may be reached at [email protected]