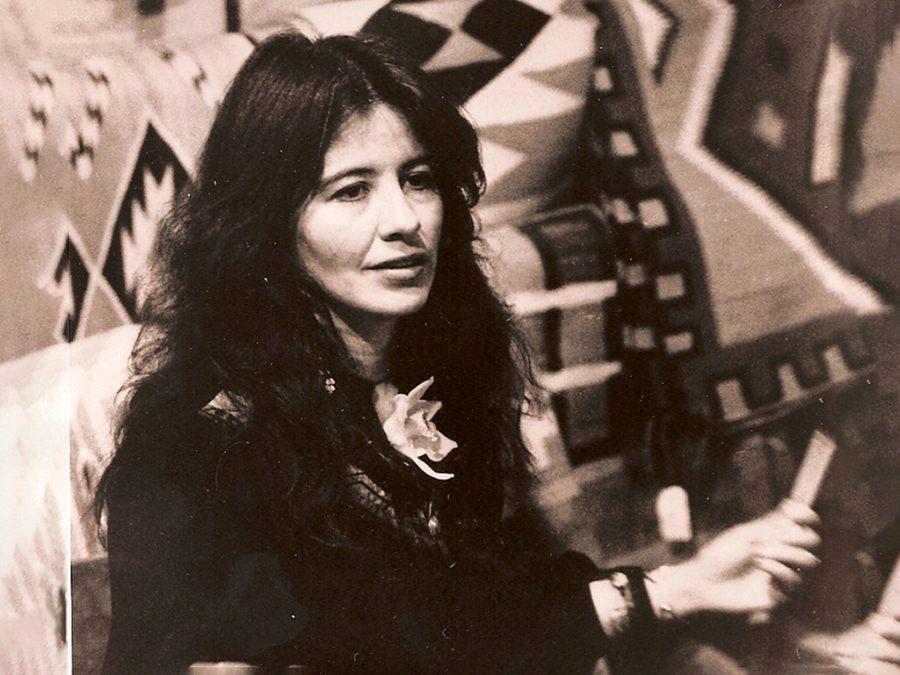 Opening with a Spanish translation of Joy Harjo’s “The Woman Who Fell from the Sky” read by Professor Paula Cucurella, the event focused on the importance of bilingualism and the uniqueness of El Paso’s binational community. Tim Hernandez, UTEP associate professor, introduced Harjo to the audience.

Harjo is a member of the Muscogee (Creek) nation centralized in Okmulgee, Oklahoma. Esteemed for her career as a poet, musician, storyteller, playwright and activist, she was awarded the Delmore Schwartz Memorial Award and the American Book Award, among others.

Opening with her critically acclaimed poem, “Eagle Poem,” Harjo then moved onto her next piece “A Postcolonial Tale,” a poem she used to perform with her band throughout the southwest of the U.S.

During her performance, Harjo played the songs “I Pray for my Enemies” and “Why is Beauty,” from her newly released album. According to Harjo, “Why is Beauty” aims to honor and empower women.

Harjo then read an excerpt from her memoir that will be released in September. The excerpt spoke of the parallels between Former President Donald Trump’s leadership and Former President’s Andrew Jackson regarding illegal placement of Native American lands and treatment. The memoir is titled “A Refuge in the Smallest of Places.”

After performing more of her poetry and music, Harjo concluded with a song in her native language.

Daniel Chacón, the event’s host and UTEP professor of creative writing, started a conversation delving into the inspiration Harjo finds in her native roots and the methodology of her writing.

“I wrote poetry sometimes to try to make sense of stuff, sometimes from my small–mindedness, someone just trying to find their way,” Harjo said. “Trying to figure out my place.”

When asked what she wants to accomplish as Poet Laureate Harjo said, “I want natives to be seen as human beings.”

A recording of the event can be found at the Bilingual MFA in Creative Writing’s Facebook page here.