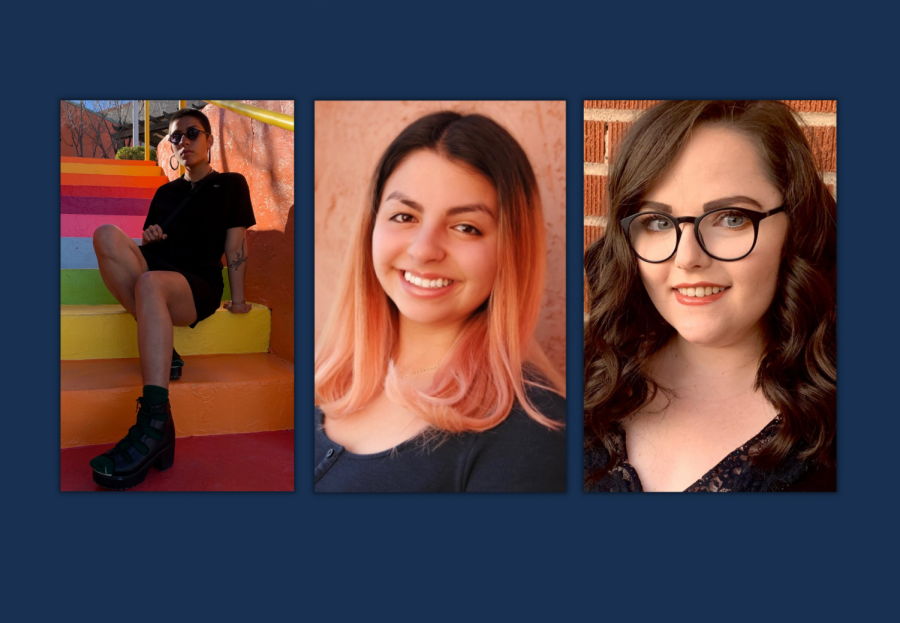 Photos Courtesy of the UTEP Department of Theatre and Dance

Three UTEP students finished at the top at the Kennedy Center American College Region 6: Regional Theater Festival, which was held virtually February19-28. Isabelle Rivera, Kalina Gallardo, and Sarah Curtis are all advancing to Nationals in April.

Kennedy Center American College Region 6 Theater festival is a national organization that exists to celebrate the educational and creative process of university and college theatre. Through state, regional, and national festivals, participants celebrate the creative process, see one another’s work, and share experiences and insights within the community of theater artists. The festival honors excellence of overall production and offers student artists individual recognition through awards and scholarships in playwriting, acting, criticism, directing, and design.

Isabelle Rivera, a senior musical theatre major, is set to graduate this semester. Rivera’s goals for the future include moving out of El Paso during the summer months.

“I had to come up with my own theatre company and prepare a presentation for the ASPIRE Initiative. It was a lot of hard work and it took me so long to finish,” Rivera said. “Something I decided to do that the selectors really resonated with was that I played music during my presentation and no one else did that.”

Through the ASPIRE initiative, Rivera will participate in a fellowship with leaders around the country that hold different positions on the administrative side of theatre. This also allows her to meet with different speakers for the next two months.

“There are some pretty important people we get to meet, and I am super excited about that,” Rivera said.

For the Excellence in Directing a 10-Minute Play award, Rivera was paired with fellow award winner Kalina Gallardo, where she directed her play Into the Mystic.

“I love working with Kalina so much, she is so talented and such an amazing writer. I was so lucky to be able to direct Into the Mystic,” Rivera said.

Rivera explains that the playwright, actors, and herself only had about three days to prepare, which required them to put a lot of their time aside to rehearse.

Lastly, Rivera won the RED Dedication award for her hard work, where she helped some directors in charge of RED spread the word about events they will be holding and assisted them whenever they needed.

Kalina Gallardo is a sophomore creative writing major with a minor in Theatre.

In the future Gallardo says she will continue writing. She explained that she admires multi-genre writers; when writing she is inclined to playwriting, poetry, essay, memoir, and more. She imagines her future involving an array of praxis which includes mutual aid, community organizing, activism and making art.

“As a brown, femme person, my entire existence is an act of resistance and that is reflected in my writing,” Gallardo said.

Gallardo won the Jim Anderson Outlaw Playwright award. This award honors a playwright that is fearless and passionate, with a humor that defies the laws of the land.

“I didn’t know there was an award as such,” Gallardo said.

Gallardo explains that she wrote her play, Into the Mystic, in Georgina Escobar’s playwriting two class at UTEP, where she and her peers were encouraged to submit their work to the festival. After incorporating some rewrite suggestions from her peers and Escobar, she decided to submit her play.

“Upon learning that my play had been accepted as a regional finalist, I felt affirmed in my creative practice and was thrilled to work with Angela Guerra who read for Maxine, Carolina Flores who read for Juana, and Isabelle Rivera the director, all UTEP students,” Gallardo said. “It’s them who brought the play to life with their energy and commitment to the characters.”

Gallardo explains her play, Into the Mystic, is a short glimpse of a supernatural reunion between a grandma and her granddaughter. They each need something from one another in order to move on, but neither of them will budge.

“This play started as a poem in which I try to remember my own Grandmother who transitioned beyond this realm about 10 years ago. I found that in trying to remember her, it was the artifacts she left behind that created a bridge of sorts,” Gallardo said. “Allowing me to see and feel her, a process that inspired the use of artifacts in Into the Mystic.”

With the National Festival coming up Gallardo is trying not to have any expectations.

“I know the work resonates with people and I am glad to participate in another round of the creative process from casting to rehearsals, to performance,” Gallardo said. “I’m along for the ride and am grateful to my ancestors who have helped along the way.”

Sarah Curtis is a senior theatre art major. Her goal is to get into an MFA program for directing and become a theatre professor in the long run.

“I love how theatre and education come together in that profession,” Curtis said. “It will give me the opportunity to teach and be able to explore any professional theatre goals for the future.”

Curtis was awarded the Kennedy Center Student Directing Initiative Region 6 Fellowship, where she prepared a director’s prompt book (plan of production) from a list of selected plays.

Curtis explained that her prompt book included research, concept statements, script analysis, blocking plans, and videos that detail her hopes for the production and emotional response for the play.

“At the festival I participated in round robin interviews and presentations of my book and directing philosophy,” Curtis said. “It was daunting, but one of the best creative experiences I’ve ever been a part of.”

Curtis directed a play called Old Flame by Mira Gibson. The play is about a woman who runs into an ex-boyfriend at a grocery store. It’s all about challenging cycles in peoples’ lives and reevaluating the routines they’re used to so that they can become the happiest versions of themselves. Curtis talked about this premise during her interviews.

“We’re all going to be reevaluating the situations we’re in as things open back up,” Curtis said. “This festival was an amazing way to get that started for me, both artistically and personally.”

Curtis explained that there are guest artists set to work with her and the group of winners from each region, along with the mentors from the festival.

Although this year’s finals will be virtual, Curtis is very excited.

“We’ll be working together a couple of hours a day and learning from professionals in our field,” Curtis said. “I’m so grateful for the opportunity to learn from and create with these artists!”

Katrina Villarreal may be reached at prospector@utep.edu.