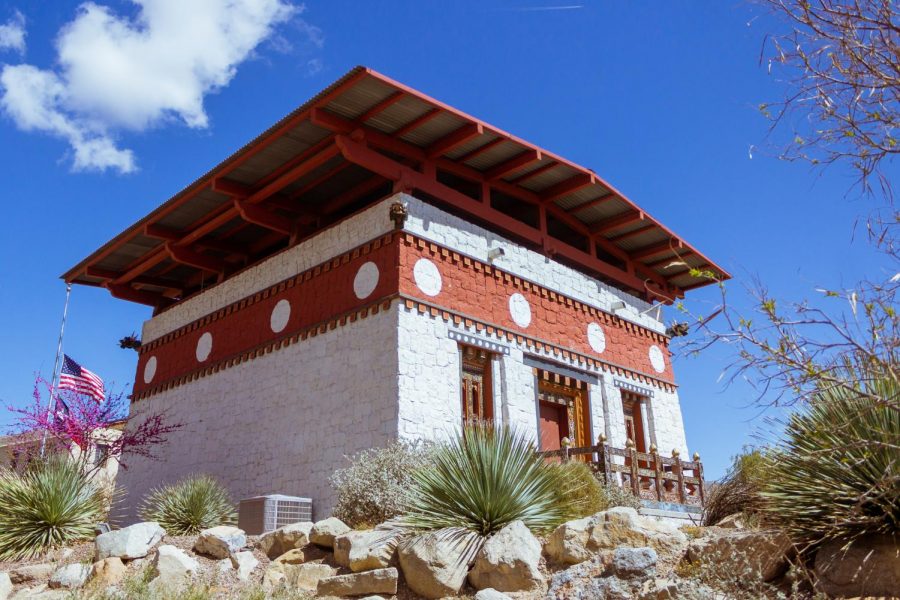 As part of UTEP’s annual Bhutan Days celebration, the Centennial Museum and Chihuahuan Desert Gardens welcomed the public for an in-person tour of the Lhakhang Cultural Center on Wednesday, April 7.

“This is just a symbol of our heritage, of the history of the campus, of UTEP,” said Daniel Carey-Whalen, director of the Centennial Museum and Chihuahuan Desert Gardens. “What this represents are some of the key tenets of Buddhism, which is wisdom and compassion.”

The lhakhang, meaning “house of gods,” is a handcrafted temple located at UTEP’s Centennial Plaza since 2015, with murals and figures depicting the history of Bhutan.

The temple is a gift made by the Kingdom of Bhutan to the people of the United States in 2008, with the stipulation that it’d be placed at UTEP, whose campus’ architecture was modeled after Bhutanese fortresses in the Himalayas.

“It’s really interesting because it’s like the UTEP architecture,” said Isaiah Ramirez, an international student from Puebla, Mexico studying industrial, manufacturing and systems engineering. “You realize how all UTEP architecture is made and based on Bhutan.”

The strong ties between UTEP and the Kingdom of Bhutan have led to the enrollment of Bhutanesse students throughout the years, as they pursue undergraduate and graduate degrees.

According to Carey-Whalen, Bhutan Days aim to educate and celebrate Bhutan’s culture and traditions with students, faculty and staff.

“It’s an opening to another way of thinking, a different culture, a different religion,” Carey-Whalen said. “We’re really hoping it inspires people to keep with the traditions we’re already familiar with of wisdom and compassion.”

The celebration includes a film and discussion with Karma Deki, director of “Kushuthara” at 6:30 p.m., April 8. The 2016 film explores the Buddhist concept of karma and rebirth.

The Centennial Museum is set to host another in-person tour of the Lhakhang Cultural Center Friday, April 9 from 11 a.m. to 1 p.m. as part of its campus celebration.

Visitors can now experience the lhakhang through a 360-degree virtual tour and its Augment El Paso app that brings the building’s paintings to life, by visiting www.utep.edu/centennial-museum/lhakhang/.

On regular days, the lhakhang is open to the public from 11 a.m. to 1 p.m. every Wednesday and first Saturday of each month, except on holidays.