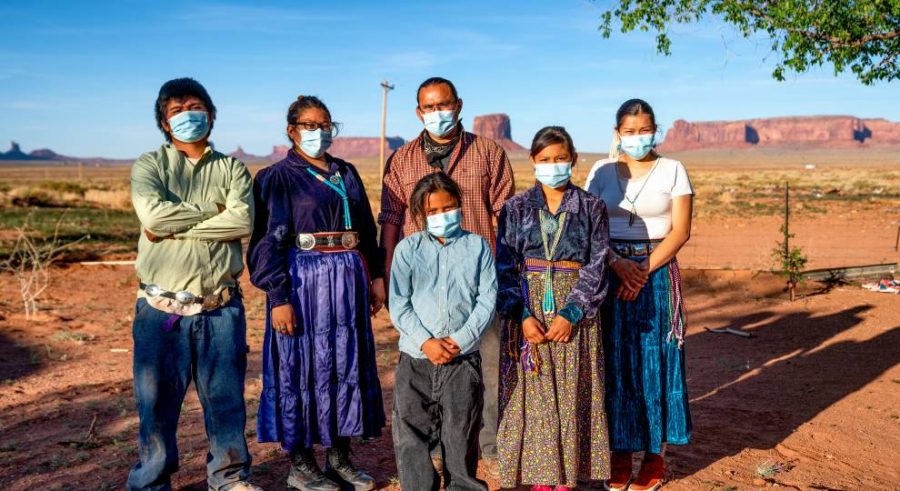 A Navajo family stands outside its home with face masks to prevent COVID-19 at Monument Valley, Arizona.

Many families in the United States have faced hardships and struggles over the last year due to the COVID-19 pandemic. While citizens of the United States are worried about their health, they at least have a better chance of surviving the virus, unlike the indigenous population that make up the Navajo Nation.

This indigenous nation wasn’t discussed as much as New York was, yet it was the hardest hit community in all of America, mostly due to the lack of resources and other cultural factors. The Navajo Nation is in the southwest region of the United States; it is home to a population of about 175,000 indigenous people. More than 28,000 COVID-19 cases have been reported and this virus has claimed the lives of more than 1,000 people. By comparison, the infection rate for New York is 1.9% of the total population, whereas Navajo Nation’s infection rate is 3.4% of the total population.

Navajo Nation president Jonathan Nez attributed several cultural factors such as people living in multi-generational homes and meetings between clan families as key factors in the spread of the virus.

“Clans came together from every corner of the Navajo Nation, got infected, and then returned home where it then spread like wildfire among small tight-knit rural communities,” Nez said.

Sriram Shamasunder, an associate professor at University of California, San Francisco has helped Navajo Nation through the HEAL (Health, Equity, Action, and Leadership) initiative, an organization whose mission is to help underserved communities with health services. Shamasunder has acknowledged the lack of proper infrastructure and other utilities as another important factor in the pandemic.

“I would say that one-third of the population doesn’t have electricity or running water,” Shamasunder said. “That means that while ‘shelter-in-place’ may for us be an inconvenience, for many Native Americans it’s an impossibility.”

Nez also agrees with that by stating, “It is evident that the USA’s health care system wasn’t equipped to handle a pandemic like COVID-19, but that is even more so in tribal communities.”

The United States federal government has also held out on lending the proper funds necessary to combat the virus. The Navajo Nation has barely seen 60% of the total economic funds promised so far, and it has taken court battles and public pressure for the nation to see this amount of money.

“Contact your congressman and senator and tell them that there needs to be a better relationship between the federal government and the tribes,” Nez said.

Despite all these setbacks and lack of aid, Nez remains hopeful since the young tribal members see their elders as sacred and want to help curve the numbers. Navajo Nation has also had some of the strictest lockdown orders and set a strict mask mandate. So far, these strict orders and mandates have worked well as they have helped to reduce the amount of COVID-19 cases reported daily. Through these issues, the tribe continues to persevere and combat the virus as best as it can.

“I’d say something interesting is the raised awareness of how reservations are. More than ever, I’ve had people asking me about the Navajo Nation because when it was on national television about how bad the communities were hit, it was the first time a lot or people actually saw the reservation as it is,” founder of A.R.I.S.E., Cheyanne, said.

Students that attend the university can reach out to A.R.I.S.E. to help its cause.

“People were shocked at the lack of plumbing, electricity, etc,” Cheyanne said. “So, this whole mess has hopefully put the situation that many Natives face into perspective, but memories are short, so not sure how much that impact will last.”

Anthony Pina is a guest columnist studying digital media production at UTEP and may be reached at [email protected].