This Matters: Readvolutionary inspires new generation one book at a time 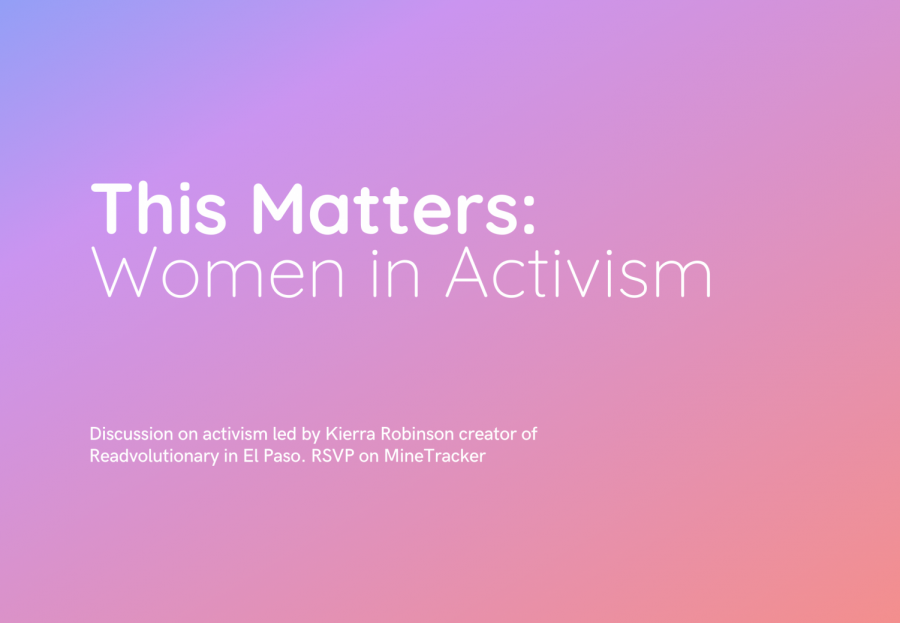 UTEP’s Student Engagement & Leadership Center (SELC) hosted a discussion on activism led by UTEP senior and creator of Readvolutionary, Kierra Lopez-Robinson, on Feb. 27 as part of its This Matters: Women in Activism discussions.

Readvolutionary is a pop-up library educating the El Paso community on current events happening in the United States, such as the Black Lives Matter movement, politics, and racism. This library gives out free books to kids and young adults to inform them about race and inclusion.

SELC’s discussion centered on what inspired Lopez-Robinson to start Readvolutionary and her thoughts on current events that have occurred in the past year related to racism and George Floyd, a Black 47-year-old man killed by Minneapolis police in May 2020.

“I was very emotional and angry when the events after George Floyd’s death happened,” said Lopez-Robinson, who is majoring in organizational and corporate communication at UTEP. “I didn’t know what to do with those emotions until I realized that I wanted to educate people at the protests by providing books and resources for them and that’s how Readvolutionay came to be.”

A member of the audience asked Lopez-Robinson what kind of support was necessary for this type of work.

Lopez-Robinson responded, “My mom was my biggest support because she helped me construct my little library and then I asked my friends if they would donate books for my library. Also, a lot of people donate books and money to buy more books.”

Lopez- Robinson said she wishes she had these resources when she was younger, but she is glad she gets to plant these seeds of knowledge in kid’s minds so when they grow older, their lives can be better, and they won’t have to unlearn prejudices.

“Children can see the full scope and see themselves represented in these books, unlike us who didn’t see it when we were younger, kids get to see that being different is okay,” Lopez-Robinson said.

Lopez-Robinson recalled an encounter with e a child who listened to Readvolutionary’s audio book on Ruby Bridges, a civil rights activist who became the first Black student to desegregate the all-white William Frantz Elementary School in Louisiana. The child told Lopez-Robinson that if it wasn’t for Bridges and her family fighting to go to an all-white public school, then he wouldn’t be able to go to school with his friends today.

“I give the books out to the children to allow them to have the information at hand and I let them do what they want with it,” Lopez-Robinson said.“Children are sponges and they soak up what they’re taught so why not teach them, so they carry this information with them all throughout their lives.”