Assistant athletic director stands out in a male-dominated field 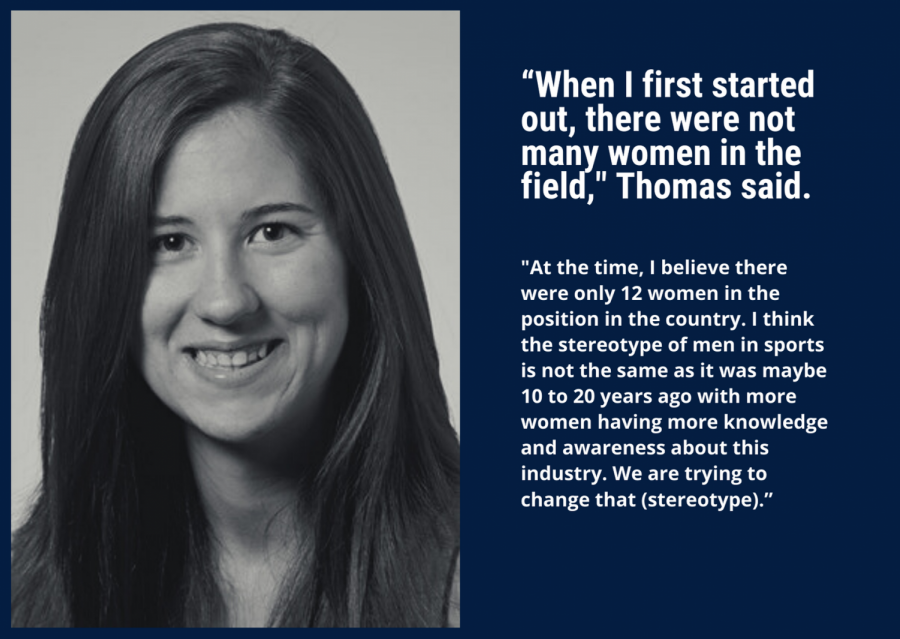 In a field once predominantly dominated by men, UTEP’s Anna Claire Thomas sticks out as a rising star within the UTEP communications staff. She is currently serving as the assistant  athletic director , a position she has held since 2019 after leaving her alma mata Louisiana Tech. She was the assistant director of athletic communications for the previous seven years.

According to Higher Education Publications Inc., the number of women athletic directors in the NCAA has nearly doubled since 1990 from around 10% overall to about 20% currently. The numbers, though, are skewed at the lower tier division representing 30% of total directors, while the upper tiers have approximately 13% of women’s positions. Much like minority coaches, women get more opportunities in the mid-major athletic conferences over the Power Five conferences, with only four women out of 65 positions in this role.

Originally from Monroe, Louisiana Thomas grew up in a family of athletes, the youngest of four children. Thomas played softball and soccer growing up. Two of her brothers played and her dad played baseball at Louisiana Tech, located in Rustin, just 30 minutes from her hometown. Her mom currently works for the university.

“Growing up around all sports was my experience,” Thomas said. “My parents, grandparents all played sports. We spent so much time around  the ballparks and learning the language I felt that helped me put a lot in my current field.”

Following the family tradition of attending Louisiana Tech, Thomas majored in journalism and was the sports editor for the school paper from 2010 to 2012 and editor in chief in her final quarter. She credits a sports writing class she took in college to fine-tune her sports writing skills.

Thomas stressed that to work in her field, one needs to be proactive and that started for her as an undeclared junior when she began working for the video department. Her love of sports and writing she felt could be a vital tool with the sports department. She stressed reaching out to the departments about helping out in whatever manner she could to get the experience that could help her build relationships with the athletic departments.

Once she graduated, she interned with the communications department covering baseball, volleyball and bowling and after three years was hired to a staff position. In 2016 Thomas was named the youngest female Division I primary football contact at the age of 26.

“When I first started out, there were not many women in the field. At the time, I believe there were only 12 women in the position in the country,” Thomas said. “I think the stereotype of men in sports is not the same as it was maybe 10 to 20 years ago with more women having more knowledge and awareness about this industry. We are trying to change that (stereotype).”

Thomas credits her journalism degree and her experience on the paper to prepare her for her current job. She feels that a knowledge of public relations would be beneficial in being proficient for this job.

“There is a lot of writing and public relations in this field, with much of it being hands-on training,” said Thomas. ”You need to be as accurate as possible. You need to have very good people skills and know how to form good (working) relationships with people. We work with every sport, different athletes and with marketing. One of my favorite parts of the job is traveling across the country and seeing how the other universities are setup. You get to know the teams and experience the arenas across the country.”

With the current COVID-19 pandemic , Thomas said that it has been a challenge having to cut back on possible media exposure but the priority in all this has been the safety of the athletes she is responsible for. One positive from the current situation that Thomas thought may play a role in future sports seasons is the university utilizing and being more efficient with the technologies at hand.

Thomas also felt that in her role sometimes it is a difficult balance between what can and what cannot be shared with the media or public. She wants to be open as possible, but privacy concerns often dictate how open her department can be.

“In this industry, you have to put in the leg work to really get somewhere,” Thomas said. “It is a big commitment but you get to travel to all areas of the country and get to cover and deal with all kinds of people from all walks of life.”

When asked about her future aspirations as a head athletic director, she said she wants to gain as much experience as possible in her current role.

Michael Cuviello may be contacted at [email protected]