‘Handmaid’s Tale’ dives into the history of women’s rights 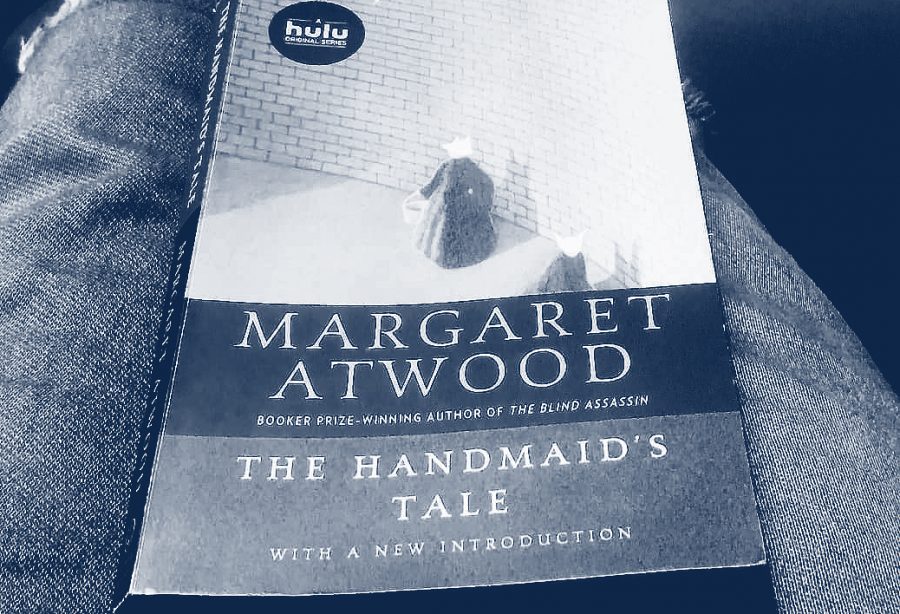 The Handmaid's Tale is a dystopian novel by Canadian author Margaret Atwood, published in 1985.

Recently, I began watching The Handmaid’s Tale on Hulu. My initial thoughts were, “Wow. This is bizarre. Like, really bizarre,” so I set out to go find the book and read it.

Some notes before I review the book: the author, Margaret Atwood wrote it in 1984 while in West Berlin. This book is heavily influenced by the trips to countries under Soviet rule and the instability she saw growing up during World War II. With that in mind, beware of spoilers below.

The Handmaid’s Tale follows Offred, a handmaid in a dystopian America now called The Republic of Gilead. Gilead is a post-coup America where democracy was replaced with a “literal-minded theocratic dictatorship,” in the words of Atwood. Gilead is based on 17th century Protestant roots, which means there is a lot of laws are literal Bible verses.

Offred is a handmaid, which means she’s fertile and her job is help reduce the low birthrates. She is assigned to the Commander and his wife to produce a child.

This book is an absolute ride. The extremism in their society was very jarring. Everyone lives under constant fear of “The Eyes,” the secret police that suffocates the smallest acts of rebellion. There is a place called “The Wall” were the dead bodies of people who committed infractions are left to rot in the hot sun as a reminder to everyone. Handmaids are held in a place called the Red Center where they’re indoctrinated before being shipped away like cattle.

Overall, the book is very heavy. There aren’t very many moments that allow readers to breathe.

I had one constant thought while I read the book: “Isn’t this a bit extreme?” The answer is yes, but remember, nothing starts out that extreme. It was a slow process of taking and redistribution, which is given to readers in glimpses in Offred’s, or as I’ll refer to her, June’s past.

What I enjoyed most about this book was how the main character is not extraordinary. She is no hero. In fact, she is what most people would be in her situation: a survivor. June relishes the little moments of rebellion. She plays along to get what she needs but never completely loses her sense of who she is.

I think in a book where one of the main goals is realism, June is expertly written. So many main characters are the heroes and I appreciate June because she isn’t the brave one. That’s her best friend, Moira. Everyone likes to think they’d be Moira, but Moiras are very far and few between. If we had more Moiras, we wouldn’t have half the issues we have today.

I appreciate that June struggles with morality throughout the book because it adds to its realism. She makes decisions that she regrets and tries to legitimize others because in a past world, she wouldn’t have ever thought of making such a choice. On a spectrum of black and white, June is very gray, and I think it’s a wonderful way to depict a character. People are not good or bad; they’re just trying to live.

Ironically, one of the things I didn’t particularly enjoy about the book was the realism. While it made the book easy to immerse myself into, it was a little too close to home. America experienced a coup on Jan. 6. We were lucky it was not successful, but those in Myanmar weren’t as lucky. The thought of what could’ve been is scary.

The hierarchy between the women in the book was irritating. At the top of the hierarchy in Gilead are men, then women. Between women, there are sub levels from most power to least: Wives, Aunts, Marthas, Handmaids, Econowives and Unwomen. The system is set in a way that the women self-regulate. It made me giggle; the way Wives would go out of their way to make Handmaid’s lives harder as if the Wives weren’t oppressed themselves. Internalized misogyny is a thing. Like crabs in a pot: we’re all struggling but I’m going to make your day worse than mine.

The parallels of the book were a little bit uncomfortable as well. The idea of following an oppressive belief system blindly. Women do not have bodily autonomy, while being reduced to their sexual organs. Women having their names taken to be labeled with the name of the man who “owns” them. The idea of being unwoman. Victim blaming. Systemic rape. Yikes.

Overall, The Handmaid’s Tale is quite an intriguing and relevant book. However, being written during the Cold War, it shouldn’t be relevant at all. I’d say the book is a great read, if you’re into dark and twisty stories. If you’re looking for a book to challenge your perspective on modern day politics and women’s rights, I’d say this is the one to do it.