UTEP volleyball closes out Blazers with a three-set sweep 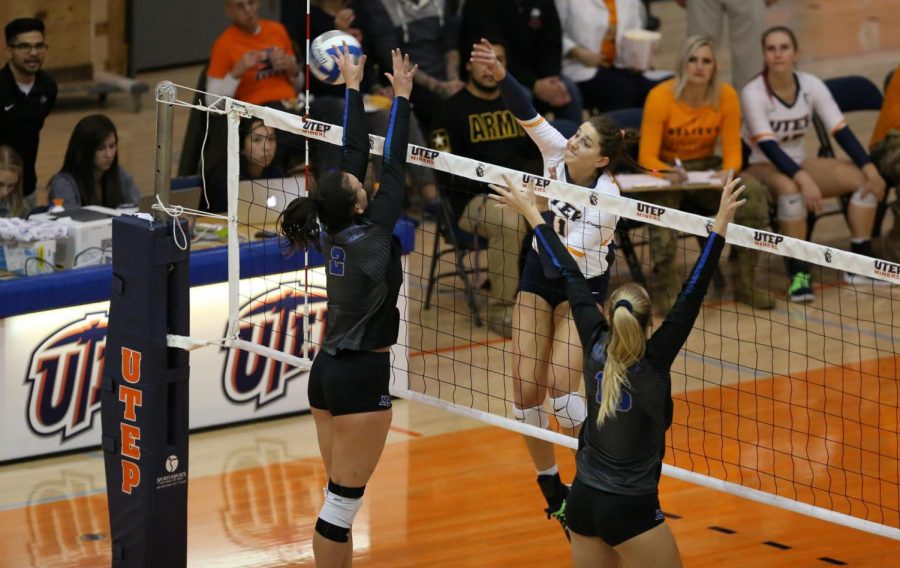 The Miners started slow in set one as UAB jumped out to a 10-3 early lead Sunday. As the set went on, the Miners clawed back with a Cheyenne Jones kill on a set up by junior Hula Christostomo that brought the team within four points. This would be as close as the Miners would get as the team showed its rust with multiple unforced errors losing the first set 25-19.

In the second set, the Miners and Blazers went back and forth until sophomore  Alianza Darly made two consecutive blocks that preceded a 7-2 run that put UTEP in control. Jones, a senior and preseason all-conference selection, closed out the set with consecutive kills as the Miners took the second set 25-21.

UAB took over in a razor-close third set on three straight kills from Caroline Stonger.

The fourth set was tied at 18 apiece when the Miners completely took control at the net to score the match’s last six points. The Miners hung tough in the pivotal fifth set but could not match the UAB’s frontline intensity as UTEP fell 15-13. Overall the left side struggled most of the day.

“I was proud of my team way they were able to compete the way we did without any practice,” UTEP volleyball coach Ben Wallis said. “We struggled from the outside but still competed hard and almost beat a really good team on their home floor. I knew we were going to struggle in the first set but the team got better, set by set.”

Jones led the team with 16 kills and Patterson was the only other Miner in double digits with 13. Crisostomo was all over the place with 32 digs on the day.

Following the five-set loss Sunday, transfer Cristostomo reminded the team of what it was capable of, reminding them when they defeated a ranked Texas State team earlier in the season..

“Hey, we lost to Texas State in five sets and we beat them the next day,” Crisostomo said. “Let’s do it again tomorrow.”

On Monday, the Miners came in battle-tested, learning much from its first live play in nine days in the previous day’s defeat. Freshman Ava Palm was inserted as the starter in Paulina Perez RoSas’ place and the Miners left side dominated the Blazers. Palm had 12 kills to go along with Serena Patterson’s 12.

Palm has struggled to get back in shape due to a lengthy COVID quarantine over the winter break for the season and came into her own in Monday’s matchup.

“Ava Palm was somebody in the fall that was a really good scorer for us but got derailed from missing time due to Covid precautions,” said Wallis. It has taken almost a month to get her back into game shape. It was a big deal to have her and Serena dominate from the left today.”

“I was very happy and grateful for the opportunity (Wallis) gave me today,” Palm said. “I knew if I was out there, I could have (gotten us more kills).”

The Miners were locked in a tight close first set when Palm closed out with two kills giving UTEP a close 25-23 opening set victory.

In the second set, both teams were locked at 17-17 when the Miners front line once again took over, scoring eight straight points to close out the second set 25-18 with four consecutive points from Palm.

On the day, the Miners controlled every match in the latter points, never trailing when the team reached the 18 point mark. In three sets Monday, the Miners had twice as many aces on serve in three sets than the team had in five sets Sunday. The front line also recorded one more block than the previous day.

Patterson and Palm led three players in double-figure kills with 12. Jones had 10 for her second consecutive double-digit kill day.

Jones was rewarded for her overall play over the weekend with her first Conference-USA player of the week honor. She had  26 total kills, five blocks and a .462 hitting percentage for the series.

Junior Kristen Fritsche had an excellent day setting up kills with 16 assists and was strong on serve with three aces. Fritsche and Costomono both had 11 digs on the day to pace the team. Freshman Hande Yetis also made her presence known with 14 assists on the day.

“It was a hard trip with all the lack of practice time,” Wallis said.  “ Had we had more time to prepare for UAB, I think we could have come home with two victories.”

UTEP will next play at home noon Feb. 21. and 11 a.m. Feb. 22 at the Memorial Gym against the University of Texas at San Antonio.