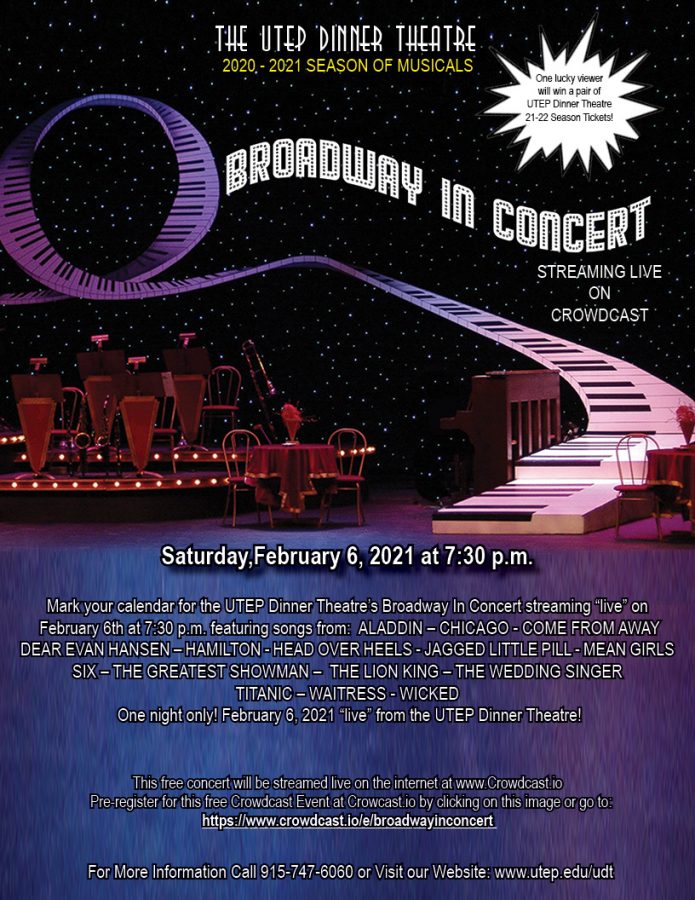 Photo courtesy of UTEP Department of Theatre and Dance

With the coronavirus pandemic stretching into 2021 and school continuing to be affected by social distancing regulations, UTEP’s Dinner Theatre’s students and staff returned to the stage with various health regulations in place.

The department’s “Broadway in Concert” was its first 2021 live, online performance. However, with the risk of spreading COVID-19 the production had to adjust to wearing masks and performing at a distance.

“Coming back to rehearsals while in a pandemic has been interesting, since we all have to be separated by six feet and wearing masks,” said Rebecca Quevedo, a freshman and musical theatre major, who debuted on Feb. 6’s performance.  “I feel like we can’t interact with each other as well as we could have if we weren’t in this situation. In the early rehearsal stages, we had to get new equipment to be able to rehearse virtually.”

Aside from bringing in new equipment for its performances, the production’s typically crowded ballroom also experienced some changes. According to Zachary Spencer Weigart, a cast member and undergraduate assistant for the theater, during rehearsals the room was cleared for more open space and doors were left opened for air to flow in.

“Theatre is persistent; theatre will always be around,” Weigart said. “The general mood is excitement overall; I think we at the Dinner Theatre have something special and are so lucky to have the space and opportunities.”

The stage floor was also marked with six-feet apart indications, so performers maintained a safe social distance while on stage. This also included instrument players, with the drummer having an acrylic shield.

Backstage, performing students were required to remain distant and wait in the lobby before entering the stage, to ensure no crowds were formed. Every rehearsal, the staff would also disinfect chairs, props or stands before and after people touched them, as an extra safety precaution.

“I’m sure everyone wants to go back to live performance, because it isn’t quite the same,” Weigart said. “I think throughout this semester there will be many live streamed forms of theatre, so we can only hope and look forward to live performances again.”

“Broadway in Concert” was a compiled performance of different Broadway shows like “Chicago,” “The Lion King,” and “Wicked.” The strain of breathing through masks during choreography, was a challenging aspect of rehearsing amid the pandemic, said Emily Hernandez, a first-time performer for the Dinner Theatre and musical theatre major.

“The hardest part is trying to breath though the mask when dancing,” Hernandez said. “Another difficulty was group dances, we had to move around the stage while maintaining six feet apart.”

Despite the enduring tests the pandemic placed upon the team, Hernandez said it didn’t undermine its will and aspiration to carry out its performance as it so sought and craved over the break.

“When something catastrophic happens, what usually follows is art,” Hernandez said.  “Art is vital because this is how we connect and express ourselves. Aug. 3, 2019 (El Paso Walmart Shooting) was a horrific day, and that night I had a show.  We didn’t cancel, we knew after such a horrible day the audience needed our art to help them smile and laugh and give them a moment of peace.”

With such a radical change to the way performances are presented, the show’s crew now welcomes this change into future post–COVID-19 performances that strain away from traditional presentation.

“I am actually open to performing online and in person,” Hernandez said.  “Online, I can reach a wider audience, and in person I can have more of a personal connection with the audience. But I do enjoy both forms of play perception, the audience gets multiple styles of creativity and art.”

People who missed the online performance can stream it on www.crowdcast.io/e/broadwayinconcert. Hernandez said fans of the theatrical arts can rest easy knowing that the flame to persistently perform amongst UTEP’s Dinner Theatre’s actors has surely not diminished.

“I hope in–person performances return,” Hernandez said. “But, for now, the show must go on.”