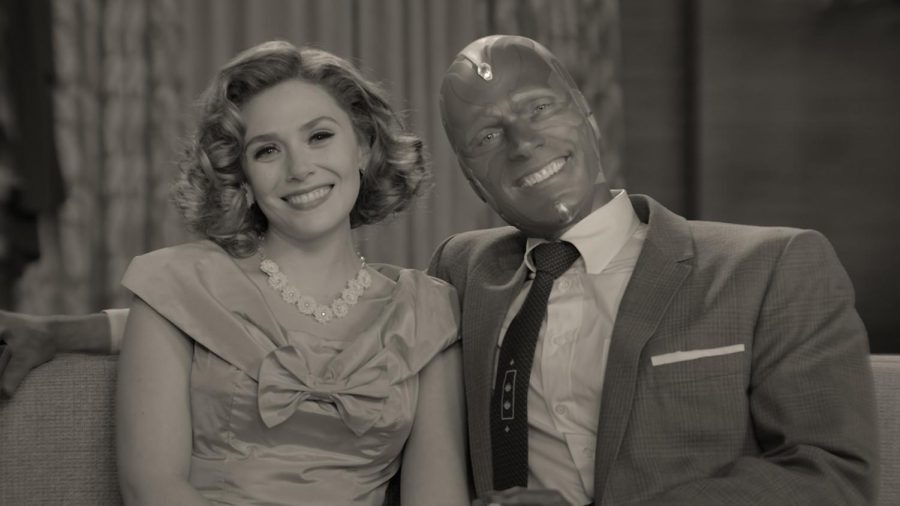 Phase four of the Marvel Cinematic Universe (MCU) film series kicked off with “WandaVision” a show streaming exclusively on Disney+. Creatively, the show does wonders for the MCU as the first Marvel Disney+ show and introduces a new fascinating feel.

The series began Feb.1 and releases a new episode every Friday. Currently, there are six episodes all directed by Matt Shakman, who has also directed episodes of “Game of Thornes” and “Fargo.”

The series follows Elizabeth Olsen and Paul Bettany as their popular superhero characters in the MCU Wanda Maximoff, aka Scarlet Witch, and Vison, as they live through various classic American sitcoms. The propose or reasoning behind the characters’ life setting is under determined but is one of the main inquires in the show.

The series provides a blend of classic sitcoms such as “I Love Lucy” and “MASH,” as well as “Bewitched,” while the MCU proceeds with its timeline following the events of “Avengers: Endgame.”  The show is portrayed as a fictional sitcom that is being watched on television by a viewer while an unknown entity causing havoc is alluded to in the show. There are also several easter eggs scattered throughout the show such as a commercial advertising and a “Stark Industries” toaster oven.

“WandaVision” is a series that is an extraordinary idea brought to life by Marvel where two popular MCU characters are intertwined in a unique situation that is full of different emotions. The show’s ability to pay exceptional homage to past sitcoms is what makes this show standout.

Olsen and Bettany’s performances on screen are phenomenal and the chemistry between the two from their other standout acts in the MCU’s various films makes this series a contender for one of the best products Marvel has ever produced. Since the duo’s introduction in 2015’s “Avengers: Age of Ultron,” the powers possessed by these superheroes from superhuman intelligence to energy manipulation, are some of my personal favorites in the MCU.

Kelly Lawler from USA Today described the show as “wildly experimental” and said that it blurs the line between TV show, overlong film, and corporate cheerleader. This is a fair assessment to make. The jump into phase four of the MCU is experimental in the sense that this is, no pun intended, a new phase for Marvel.

I believe “WandaVision” is just the beginning of what is going to be a new style of content in the MCU.

New York Times writer Mike Hale describes the previous Marvel TV series such as “Jessica Jones” and “Agents of S.H.I.E.L.D.,” as shows that provided some solid entertainment until the “corporate Thanos in Burbank decided their time was up,” referring to Disney +.  Hale states that odd does not by itself equal good and it feels as if we are still waiting for the real show to get started.

Personally, I can see the frustration with the prolonged story line but the twists and turns of the series is the gem of the show. If explanations of why certain occurrences happen in the show were given to viewers from the very first episode, I believe the show would not have as much unique substance as it does. A monumental series finale may be coming, so the continuous buildup is beneficial.

“WandaVison” can be streamed on Disney+, which can be purchased for $6.99 a month.

Isaiah Ramirez may be reached at prospector@utep.edu; @IsaiahRamirez1 on Twitter.