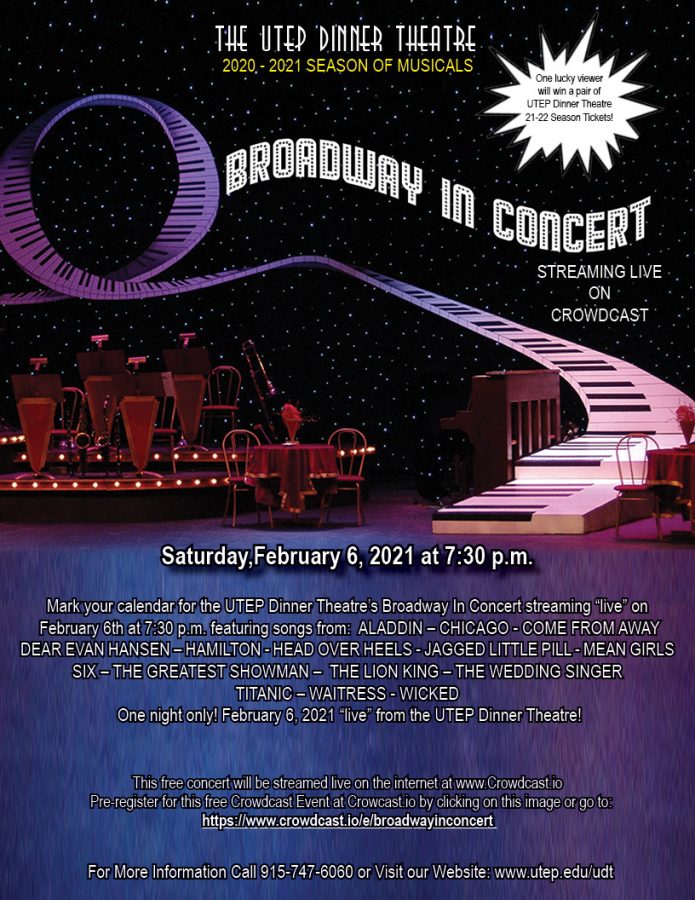 The performance is set to broadcast live Feb. 6 over Crowdcast. Although the event will be free of charge, attendees will still have to register in advance in order to have access to the online stream.

After almost a year since UTEP’s Dinner Theatre was able to perform to a live audience, the crew is excited to perform again.

“Everyone is actually very excited to perform and to work on a show again,”  Greg Taylor, founder of UTEP’s Dinner Theatre said.  “We are following all the CDC guidelines in regard to distancing, mask wearing and sanitizing, but this is for everyone involved [in] putting on the show.”

Federal restrictions limit large gatherings, so broadcasting live has opened the door to bringing people back to theatre once again.

“Right now, we are not permitted any gatherings of more than 50 people. Considering most shows have a cast, band, crew and food service staff over that number, we cannot have an audience at this time,” Taylor said. “ We are hoping we will be able to start up again in some capacity in the fall semester if things improve.”

Taylor also gave some insight into what specifically the show will be about and what music they’ll be presenting.

“I am excited about the song choices we have made, there are the famous songs everyone knows but a few more obscure ones mixed in,”  Taylor said.  “This is a concert featuring songs from Broadway musicals, so there is not a storyline and the concert is broken up into four sections.”

The performance will feature excerpts from popular classics like “Chicago,” “The Lion King,” and “Hamilton.” There will also be some tracks from their upcoming programs of  “Titanic,” “The Wedding Singer,” and “Head Over Heels.”

Paying for a virtual show might discourage guests from attending events, but the dinner theatre staff has thought carefully on how to handle this.

“Other art companies have tried charging for online performance and sales but have not been spectacular. The students have worked so hard on this that we wanted to make sure they had as large an audience as possible. So, we made it free to make it possible for many people to watch it regardless of their ability to pay.” Taylor said.

Taylor  noted that there will be a chance to make a donation to help cover the cost of the program, as well as students’ scholarships for delivering this performance later in the semester.

Those interested in preregistering for the program can find information here.

Sven Kline may be contacted at [email protected]; @SvenKline on Twitter.