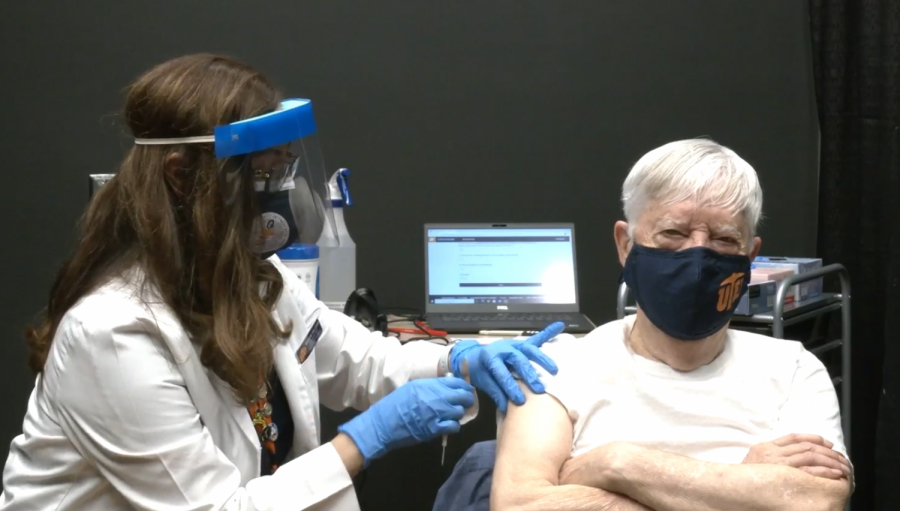 UTEP began administering the first doses of its 975 Pfizer vaccines on Friday, Jan. 22 and Saturday, Jan. 23, to high–risk students, staff and those working in medical environments.

UTEP President Heather Wilson regarded the University’s program as well-equipped and prepared, certain that UTEP’s facilities are capable of supplying all the help necessary for the community’s recovery. A multitude of students and staff have expressed their satisfaction with the efficiency and accessibility of UTEP’s vaccination program.

For political science professor, Todd Curry, protecting his family and expediting the process to return to the physical classroom was the most important aspect of receiving the vaccine.

“Give it to me as soon as possible,” Curry said. “The most responsible thing we can do for your education and for your opportunities at UTEP is to get the vaccine as soon as it’s available to you.”

Considering the complications, the nation has faced with distributing the vaccinations in an effective manner and the size of UTEP’s student and faculty population, Curry expected a longer waiting period before receiving his scheduling call. He was pleasantly surprised to be listed in one of the first slots to receive the vaccination at UTEP’s new Interdisciplinary Research Building.

“I spent twenty minutes inside: five to get the shot, fifteen minutes to wait, and I was done,” Curry said. “It was pretty painless all around and exceedingly well run.”

Curry stated he experienced no noticeable side effects to the vaccine and was impressed at how well organized the operation was run, a sentiment shared by numerous faculty and students.

Cecilia Fierro, assistant clinical professor of occupational therapy, emphasized the importance of having faith in the scientific process surrounding the creation of the vaccine and believes receiving it communicates her certainty that it is safe. Fierro expressed her confidence in UTEP’s capacity to administer the vaccine in an efficient manner.

“UTEP has done a remarkable job, and the staff and students that were there were so very welcoming, customer friendly, and it made the process that much easier to participate in,” Fierro said.

During her visit, she was surprised to be greeted by Wilson, who stopped to talk with everyone in line about their experience and supply reassurance. Fierro said Wilson’s presence displayed her true commitment to the community and the UTEP student body.

Fierro described feeling only mild symptoms, soreness in the arm and a fleeting headache. She reiterated the necessity of trusting healthcare providers and medical scientists performing their duties for the well-being of the world and was optimistic about the prospect of overcoming the virus. For some, hope is the driving force behind their choice to get the vaccine.

A junior international business major, Cosima Rangel, described her eagerness to receive the vaccine as a manifestation of hope, a step towards breaking the constraints and stress of the pandemic. Rangel believes that while some individuals may still feel hesitant about being vaccinated, everyone shares in the responsibility of slowing the spread and the result is greater than the risk.

“I think the biggest issue people are facing right now is nervousness around receiving the vaccine… you have to trust the process,” Rangel said. “I want to emphasize by taking the vaccine, that is doing your part in ending this virus.”

She said that despite experiencing mild soreness and headache, she was not affected by any side effects because of the vaccine. Rangel said that regardless of the possibility of suffering any side effects from a second dose, she felt privileged to receive the vaccine so early, and the pain is just “a drop in the bucket” compared to the reward of putting an end to the pandemic.

For senior political science major, Derek Hernandez, receiving the vaccine was critical to his safety as an asthmatic. While he received his vaccination at University Medical Center, it was administered by a UTEP student, and he described it as a painless experience.

As a strong advocate for scientific research and the dissemination of accurate information to the public, Hernandez believes that a communal mindset is crucial to the success of the vaccination program.

“This vaccine has been thoroughly tested… not only here, but around the world, and it wouldn’t have been approved for emergency use if the top scientists and experts didn’t believe it was safe,” Hernandez said.

Hernandez proceeded to detail the process of how the vaccine functions within the body and its effectiveness and urged people to perform their own research on the functionality of the vaccine to put their minds at ease.