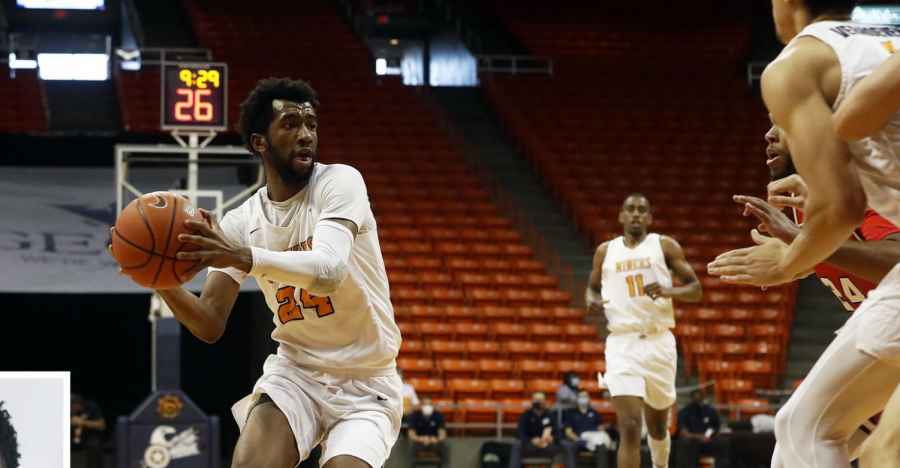 Jamal Bieniemy was born in New Orleans and is a multidisciplinary study major at UTEP.

Newly acquired transfer junior guard, Jamal Bieniemy, from The University of Oklahoma, is expected to make an impact this season for the Miners. Bieniemy is joining the team as the point guard the Miners missed last year.

The recruit started 31 games from his time at Oklahoma and averaged 5.2 points per game, four rebounds, 2.8 assists per game, and shot from beyond the arc at 34.6%.

While being a true point guard and ball distributor, Bieniemy’s shooting from beyond the arc is the second most important thing he brings to the table coming into this season as the Miners struggled from the 3-point line with no pure shooter. Last year the Miner’s offense seemed to sink and went long minutes without scoring or creating a big–time shot to bring them back, bringing them down by a big margin at times and unable to return from the deficit.

“It’s definitely a learning experience, it’s kind of the complete opposite from where I came from,” Biniemy said about UTEP’s team during a news conference. “It is a lot of up-tempo and high pace, I’ve been just trying to get used to that.”

Ultimately, he committed to Oklahoma.

During his playing time in Oklahoma, Bieniemy started with 47 games in two seasons, and 30 games during the 2019-2020 season. When he took over the starting job in early 2019, he immediately showed his skills to get the ball in the net, scoring 6.4 points, averaging 4.2 assists, 2.5 rebounds, and 1.5 steals.

What was the most impressive stat when taking over the starting job for that game, was his 40.9% shot from beyond the arc.

Another game where Bieniemy showed impressive skills was against The University of West Virginia, when he scored a career-high 20 points and was 4-of-6 from beyond the arc while shooting 5-of-6. He has proven he can score at will and can consistently knock down 3-point shots.

Bieniemy’s ball distributing went noticed during his time in Oklahoma as he recorded a season–high seven assists in a game against Texas Christian University. He showed even more unselfishness as Bieniemy recorded two career bests of eight assists twice, as those came against The University of Kansas and The University Of Texas.

Now that the Miners were able to get a high-impact player, the Miners can have a stagnate offense with the presence of Bieniemy running the floor.

Daniel Lopez may be reached at [email protected].