The most anticipated films set to release in 2021 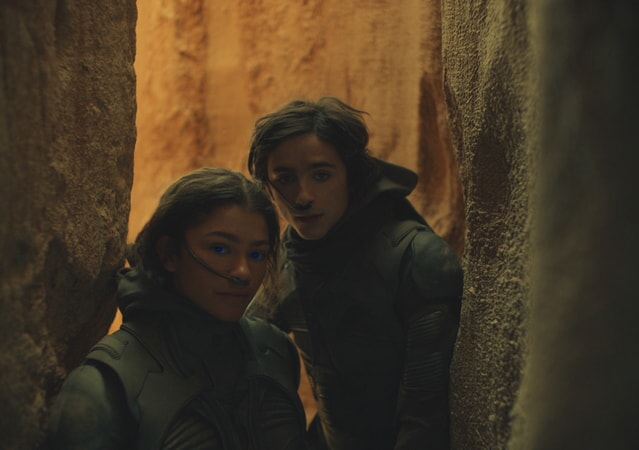 “Dune” is an upcoming American film directed by Denis Villanueve, telling the first half Frank Herbert’s 1965 novel by the same name.

The idea of a new year bringing new beginnings has never applied more to a year than 2021. After a disappointing cloud doomed over film release dates throughout 2020, 2021 brings a thrilling wave of entertainment with the most anticipated movies set to release this year.

As the COVID-19 pandemic continues, more studios have begun releasing films on streaming services, like Amazon Prime and HBO Max, at the same time as they’ll hit theaters. Although this method has been debated among film enthusiasts, Amazon Prime will continue to adopt it as  “Coming 2 America” is set to join their platform on March 5.

The movie directed by Craig Brewer, will be starring Eddie Murphy and Arsenio Hall as Prince Akeem and his sidekick Semmi. In the comedy sequel to the 1988 movie “Coming to America,” former Prince Akeem is set to become King of Zamunda when he discovers he has a long-lost son living in America. Wanting to meet and build a relationship with his heir, the prince journeys to America once again.

Another movie reaching theaters on March 5 is “Raya and the Last Dragon,” directed by Paul Briggs and Dean Wellins. The computer-animated film stars Kelly Marie Tran and Awkwafina as warrior Raya and water dragon Sisu. It is the latest animated film made by Walt Disney Pictures, centering around Raya’s search for the last dragon, in order to save her home Kumandra from monsters. The film was originally issued to hit theatres on Nov. 25, 2020, but due to the COVID-19 pandemic, it was delayed for another couple of months. Disney fanatics will be able to enjoy the company’s film as it will be simultaneously released on Disney+ with Premier Access.

Aside from comedies and animated pictures, horror and thriller films will be making their way to theaters this year. “Candyman,” a sequel to the 1992 movie of the same name and whose release date had been pushed back several times due to COVID-19, is finally coming to theaters Aug. 27. The film, directed by Nia DaCosta and starring Yahya Abdul-Mateen II as the protagonist, is sure to bring chills down viewers spines. The movie is about a visual artist named Anthony McCoy who moves to the newly gentrified neighborhood Cabrini Green. Anthony meets an older resident of the neighborhood who tells him about the legend of the elusive serial killer called the Candyman. Anthony becomes obsessed with the legend and uses it to influence his art but begins to go mad after learning the truth about the Candyman.

Another thriller coming to the big screen on April 23 is “A Quiet Place Part 2”, directed by John Krasinski and starring actress Emily Blunt as the lead. The second installment to the Quiet Place series takes place after the events of the 2018 movie. Now, the Abbott family must venture outside of their comfort zones and into the world where they not only have to battle the creatures attacking anything that makes a sound, but also new threats. The family must learn to survive these new obstacles.

Emily Blunt will also star in “Jungle Cruise” on July 30, nearly a year later since its initial release date. The action-packed fantasy movie is based on Disney’s theme park ride and will also star Dwayne Johnson through the direction of Jaume Collet-Serra. In this movie, Blunt plays Dr. Lily Houghton who is helped by Johnson’s Frank Wolff to find an ancient Amazon rainforest tree with unimaginable healing powers. Along the way, the characters run into obstacles they must overcome in order to change the world of medicine.

2021 is also set to be the year for musical lovers as Jon Chu’s  “In the Heights” comes to the silver screen on June 18. Inspired by the musical by the same name composed by Lin Manuel Miranda and starring Anthony Ramos as the lead, “In the Heights” is about a tight knit Dominican American neighborhood in New York City. The plot centers around a bodega owner who struggles with his feelings about closing his store and moving to the Dominican Republic after inheriting his grandmother’s fortune.

A fun action and comedy movie viewers are also excited about is “Free Guy,” starring Ryan Reynolds as a bank teller named Guy, who realizes he is a background character in a video game. After learning his game will soon go offline, Guy decides to not be a background character anymore and instead become the hero to his own story. The cast also includes Taika Waititi and Joe Keery and is directed by Shawn Levy. It hits theaters May 21.

Finally, after much anticipation, 2021 will also see the release of “Dune.” The Warner Brothers film will tell the first half of Frank Herbert’s 1965 novel by the same name, as it follows the journey of Paul Atreides, the son of a noble family entrusted with the protection of the most vital element in the galaxy. Paul must navigate through the most dangerous planet in the universe to ensure the protection of his family and his people, as conflict over the planet’s exclusive supply arises. The film, expected to be released on Oct. 1, is directed by Denis Villeneuve and stars Hollywood actors like Timothée Chalamet, Zendaya, Rebecca Ferguson, Jason Momoa and Oscar Issac.

The world will get another performance by actress, singer and Emmy–award winner Zendaya on Feb. 5, as “Malcom and Marie” will be digitally released on Netflix. Sam Levinson’s black-and-white film will tell the story of filmmaker Malcom, played by John David Washington, as he returns home with his girlfriend Marie, played by Zendaya, following a celebratory movie premiere with what he’s sure will bring critical and financial success. Their love will be put to the test with the evening taking a turn as revelations about their relationship begin to surface.

With 2021 films bringing back old characters and presenting new ones, the new year is expected to be a better one for the film industry and its aficionados.