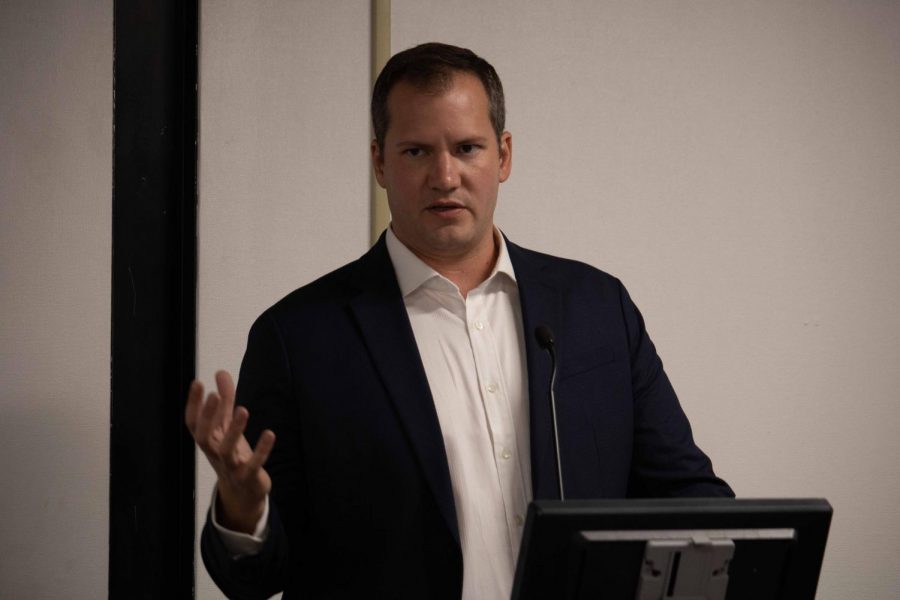 Jeremy Slack, associate professor of geography, is investigating the Mexico's immigration enforcement with help from a grant.

Jeremy Slack, associate professor of geography at UTEP, was awarded a $39,500 grant this past summer by Mexico’s Consejo Nacional de Ciencia y Tecnología (CONACYT) and the University of Texas System for research on Mexico’s immigration enforcement.

Slack’s project was one of the few social science projects that got funded this year. His research primarily focuses on analyzing Mexico’s immigration enforcement practices, in order to understand how the country’s government is stopping people from coming through the country and how it relates to people wanting to stay in Mexico or not.

A caravan of Central American migrants has been making its way through Mexico to reach the United States.  According to BBC News, in late 2018 the Enrique Peña Nieto administration offered temporary work permits to migrants who registered for asylum. But to qualify, migrants were required to stay in Mexico’s southern states of Oaxaca and Chiapas.

“We wanted to really figure out if people are actually going to do that and what would be barriers to that,” Slack told The Prospector.

According to Slack, his research is not centered on trying to push migrants to stay or live in Mexico, but to understand the reasons they would or would not want to do so.

Some of the grant’s money has been allocated to building infrastructure in migrant shelters in Mexico to conduct remote interviews with subjects. Slack and his collaborators have installed Wi-Fi in the Leona Vicario shelter in Ciudad Juárez.

Having internet access means migrants can communicate with the outside world, as oftentimes, migrants run out of money or prepaid cellphone minutes.

“A Wi-Fi connection can be a big lifesaver for talking to lawyers, talking to families, making arrangements,” Slack said.

Research aside, one of Slack’s primary goals is to make sure t the process is beneficial to the community. The COVID-19 pandemic also adds an additional factor of research, and that is to understand what it’s like to cross borders “in a time of complete immobilization.”

At UTEP, Slack’s research is focused on migration, borders, Latin America — especially Mexico and Brazil — drugs and drug trafficking, among other related topics. In his most recent book, “Deported to Death: How Drug Violence Has Reshaped Migration on the U.S.-Mexico Border,” Slack looks at how the drug war has impacted migrants who are stranded in unfamiliar cities after being deported and how they have been targeted by drug cartels.

Slack interviewed migrants in shelters about their experience crossing illegally and being deported. This included a young man, Juanito, who was kidnapped by Los Zetas, one of the most dangerous drug cartels in Mexico.

When Slack started this kind of work, he was a graduate student at the University of Arizona,Although, violence was starting to rise in Cd. Juárez, it had not reached Sonora, the Mexican state which borders Arizona. It didn’t take long, however, for crime and violence to rise in Sonora.

“We started to hear a lot of stories about kidnapping and drugs, and it kind of boiled up around us,” Slack said.

This inspired Slack to take his research south of the border and get a closer look at the kind of mobility that takes place to cross to the U.S., including the dangers migrants face when they cross drug cartels. In his book “Deported to Death,” Slack said most of Mexico’s dangerous cities have been among the largest sites the U.S. government deports migrants.

From 2011 to 2013, Slack traveled to his regular spots in Mexico for a couple of weeks at a time to interview migrants build rapport with them.

When he started doing more fieldwork, he would cross the border, daily, for six months. Even though he didn’t pose a threat to cartels, he recalls being careful and always telling the truth about what he was doing. He even had to be careful with who he spoke to.

“It’s not to demonize people who are deported or migrants, but there is a lot of infiltration in that flow of people. It’s a lot of people. You don’t know who everyone is,” Slack said.“So I would always approach people with kind of honesty, but also really aware that they might have ulterior motives for talking.”

Slack refers to migrants who are detained by the U.S. government, are deported to a Mexican city and often become kidnapping targets for drug cartels.

In addition to his current project, Slack is conducting research on displaced Mexican families fleeing violence. Another grant will also give Slack and Josiah Heyman, director of UTEP’s Center for Interamerican and Border Studies, the opportunity to research the Remain in Mexico program.

Andrea Valdez-Rivas may be reached at [email protected]; @AndreaVRNews on Twitter