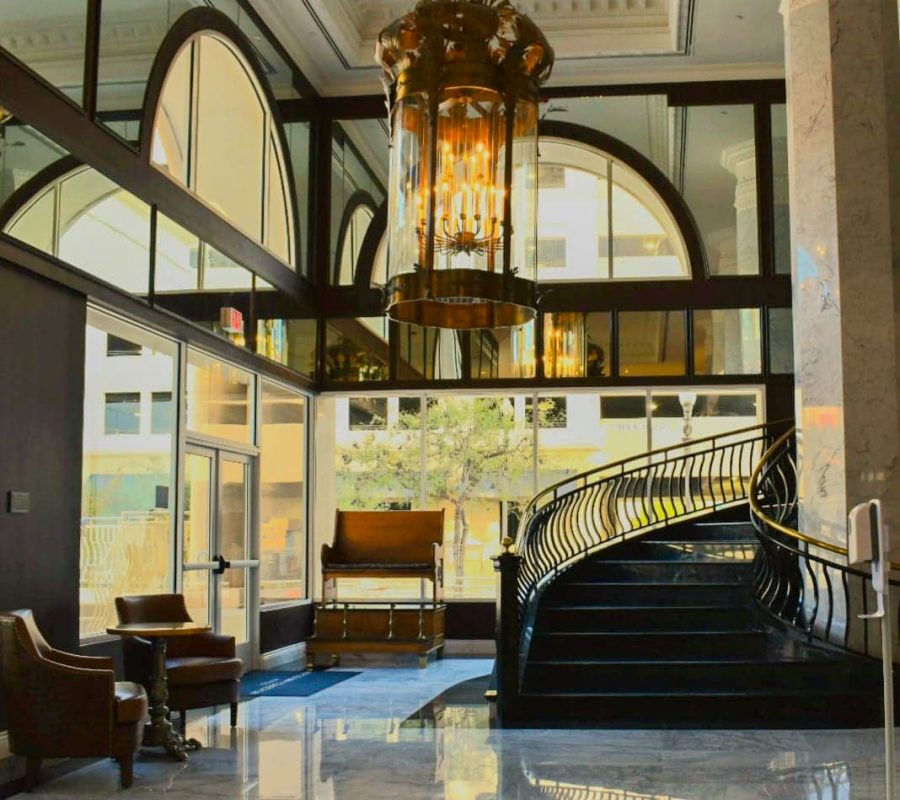 The building was added to the National Register of Historic Places on January 5, 1979.

More than a hundred years since its original opening, the historic Hotel Paso del Norte in downtown El Paso reopened its doors to the public after a multi-million-dollar renovation.

The newly refined hotel, originally opened on Thanksgiving Day 107 years ago, underwent a $1.5 million renovation making it one of the sturdiest structures in El Paso.

Zach T. White, a local businessman, financed the renovation of the 351-room hotel with the goal of restoring the hotel to its original glory. The building, originally designed by Trost & Trost, was envisioned to be a first-class hotel that would attract people to the Southwest.

Some new features of the hotel include the distinguished dome bar, which stands at 25 feet in diameter, with a mosaic Tiffany glass covering the top of the black and white marble bar. From the high ceilings cascading down from the dome are four original chandeliers, accompanied by accented walls with red and gold trimmings.  In the lobby there is an 8-foot bronze statue of the famous Mexican General Pancho Villa welcoming the U.S. General John J. Pershing. There is also over 33,000 square feet of space for guests to host meetings, events, and special celebrations.

The three restaurants located in the hotel have a distinct culinary scene and southwestern décor. Drinks and food served at the restaurants are inspired by El Paso, the Texas mountain and Basin region. They serve enchiladas made with handmade tortillas from Sabor, hand cut steaks from 1700 degrees Steak House and homemade gelato with freshly baked items from Dulce.

The rooms have a south western motif and offer views of the franklin mountains, Juarez, and downtown El Paso. Other newly lavish amenities include the 10th floor rooftop pool, boutique, cigar bar, fitness center, and upcoming spa with a state-of-the-art salt therapy room.

According to a Paso del Norte hotel’s newsletter the early 20th century, guests would celebrate with drinks while watching the Mexican revolution from the hotel’s 10th floor.

The Paso del Norte hotel was originally scheduled to open in 2018 but was delayed due to construction issues and COVID-19 business restrictions.

However, the hotel is now open for safe travel and dining. It is among one of the world’s first hotels to open with a virus-killing air filtration system throughout the property. Its state-of- the-art plasma air system can kill 99% of bacteriophage in the air after 10 minutes of use.

The hotel opened its doors on Oct. 8, and hosted a ribbon cutting ceremony Oct. 15.

For more information about the hotel one may visit its website at  www.hotelpdn.com.

Alyson Rodriguez can be reached at [email protected]; @alyson_rod1127 on Twitter.