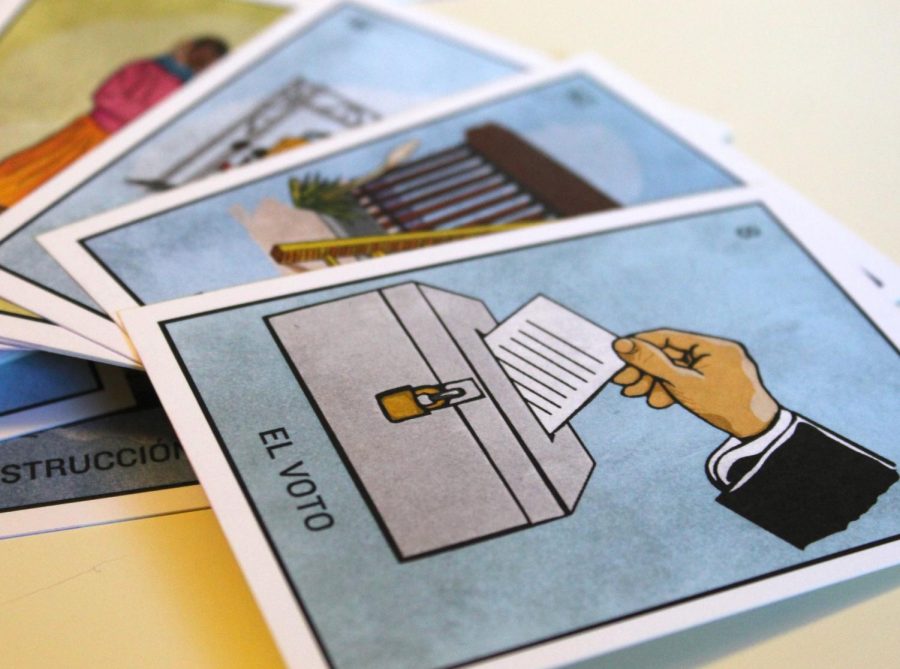 La Migra (“The Border Patrol”) and La Estrella (“The Star”) are playing cards found in the El Paso-themed version of the famous Mexican board game lotería.

“The Dreamer”, “The Border” and “The Vote”, are cards found in an El Paso-themed version of the popular Mexican game, lotería, created to bring awareness to local issues and elections.

“Votería”, by the El Paso Equal Voice Network (EVN), is striving to bridge the gap between voters and politics  by bringing local issues to the table. The card game replaces traditional lotería images like La Dama (“The Lady”) or El Catrin (“The Gentleman”) with La Obrera (“The Worker”) or El Chuco (“The Chuco”), that relate to El Paso’s culture, history and issues.

“The best way to sort of convince a person to vote is not just a phone call from a stranger. It’s your friends, your family and your coworkers talking about the issues and having a pathway to understand how it’s connected to your vote,” said Cemelli De Aztlán, who works as a network weaver and community building member for EVN. “People can sit down and literally play this game and learn why these issues are important.”

EVN is a network consisting of La Mujer Obrera, A.Y.U.D.A., Texas Rio Grande Legal Aid, and the A.C.L.U. Border Rights Center, who are collaboratively working on issues that affect the community like border rights, environmental justice and voter engagement.

“Through these five organizations, we all work together in order to push for long term change driven by community, for community,” De Aztlán said.

Specific local issues on the game include La Destrucción (“The Destruction”), featuring an image of the Durangito neighborhood in El Paso, a historic space in the city that has been under constant threat of being replaced by a multimillion community art center.

Susana Prieto Terrazas, a Mexican labor attorney and El Paso citizen, is also featured on the game under Los Derechos (“The Rights”), after being detained in Tamaulipas, Mexico in July for allegedly instigating illegal protests in Ciudad Juarez and Matamoros against low wages for maquiladora factory workers.

After spending three weeks in jail, Prieto Terrazas was released with the help of a coalition created by EVN demanding her freedom.

Another issue addressed on Votería is the rise in feminicides in the El Paso/Juarez border region, which are listed under the Fue Feminicidio (“It Was Femicide”) card. The illustration includes a cross and cardboard poster honoring the death of feminist artist and activist, Isabel Cabanillas, who was murdered in Juarez.

Cabanillas was part of the group of Juarez women, Hijas de su Maquilera Madre, who spoke against the systemic and historical violence of women in Mexico.

“We’re literally putting our issues on the table so that people get involved and inspired to do something,” De Aztlán said.

With the 2020 Election Day set on Nov. 3, the network distributed its Votería game to the first 100 registered EVN members. In addition to the game, members were also given a bag featuring El Voto (“The Vote”) design, various voter registration cards, a face mask, a sticker of The Dreamer game card and a Votería shirt.

“Voting is only a piece of the puzzle,” De Aztlán said. “For many of us freedom is yet to exist, but the threat of losing our democracy or ability to create a democracy, to create peace, to create dignity, that’s definitely at risk.”

Votería includes 54 cards and 10 boards, with each card’s issue information available on EVN’s website at https://www.elpasoequalvoice.org/. For a copy of Votería, one may also visit EVN’s site to contact its administrators.