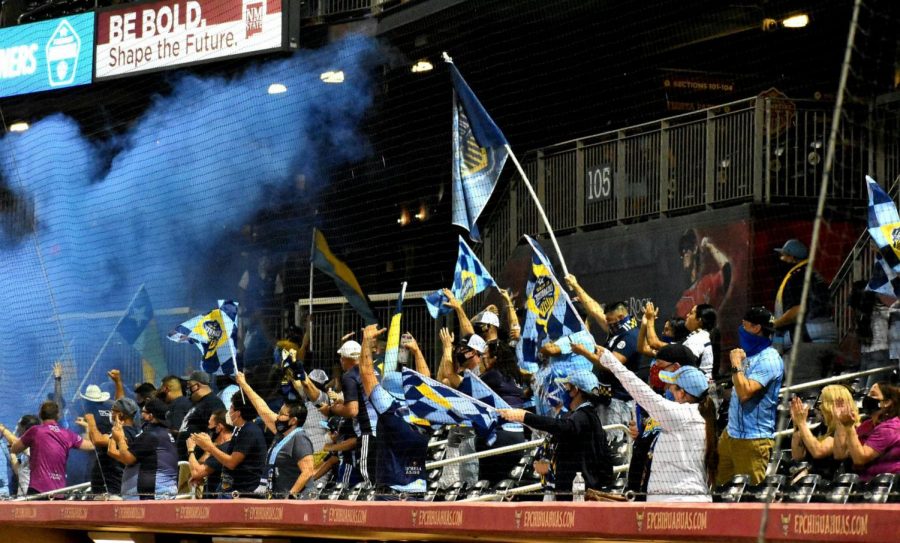 The El Paso Locomotive advanced to the USL western conference final Saturday night by winning its match in the penalty kick phase for the second week in a row. El Paso tied with its former conference rival New Mexico United 1-1 at the end of regulation play.

“Tonight, was tough. There were some good things and some not so good things,” Locomotive Head Coach Mark Lowry said. “It was an up and down game. It was a typical semifinal about attrition and believing in each other. It felt good going into extra time, and the guys put in a phenomenal extra 30 minutes on the back of the New Mexico goal, which could have deflated us. The guys stuck to it; they showed great heart and great grit, more than I did, to be honest. They were superb tonight.”

A very tight game with United controlling possession most of the night 61% versus 39% from the locals. The Locomotive had a total of 12 shots in the 120 minutes, with five on target, three off-target, and four blocked by NM’s goalkeeper Cody Mizell.

At the 30-minute mark of match, came the first critical action of the match when Locomotive’s forward Aaron Gomez passed to midfielder Dylan Mares, who, with a clean shot from the edge of the box, sent the ball to the right angle of the net and scored the first goal of the game.

During the game, El Paso had several opportunities that goalkeeper Mizell had the chance to block or saw El Paso going off the goal. New Mexico’s greatest opportunity of the game came up at the 90+5 minute when forward Romeo Parkes, with a 25-yard shot, scored the equalizer for the visitors and sent the game into extra time.

For the extra time, El Paso had subbed out its three forwards, Gomez, Carrijo, and Mares, to have more defense and maintained the 1-0, but the surprise came at the very last moment of the game. Both teams had the opportunity to break up the tie but could not find the back of the net and sent the game to the penalties.

The Locomotive started the penalties with left-back Eder Borelli scoring, and then it was New Mexico’s forward Devol Sandoval, who scored the 1-1 for the first penalties’ round.

The second round started with El Paso’s midfielder Nick Ross, and New Mexico’s Chris Wehan tying it with goals.

The fourth round was the critical final one when El Paso  forward Saeed Robinson scored the 4-2 lead for the Locos, and right after him, United’s Parkes who sent the game to overtime was blocked by Locomotive goalkeeper Logan Ketterer to keep the lead.  Ketterer’s block opened the opportunity for midfielder Distel Zola to score the fifth and winning penalty for the home team with a 5-3 win on penalties.

“It’s exciting, and it feels good,”  Ketterer said. “In Columbus (a few years back), I didn’t come through, and it’s exciting that I got a chance at redemption in back-to-back weeks.” “We’re really excited to be back. We have a huge chip on our shoulder from losing there last year, and we’re excited to get a chance at redemption there,” Ketterer added. “Phoenix will be no joke, but we can’t wait to get it on.”

El Paso will be playing the Western Conference Final next 8:30 p.m. Oct. 24, at the Casino Arizona Field in Phoenix, Arizona.

“It’s been a weird season, but we’re in the Western Conference Finals. Twice in two years,” Lowry said. “If you had offered that to any of us before the season, we would have snapped your hand off.”

Heriberto Perez may be reached at [email protected]