RBG’s legacy of gender equality will never be undone 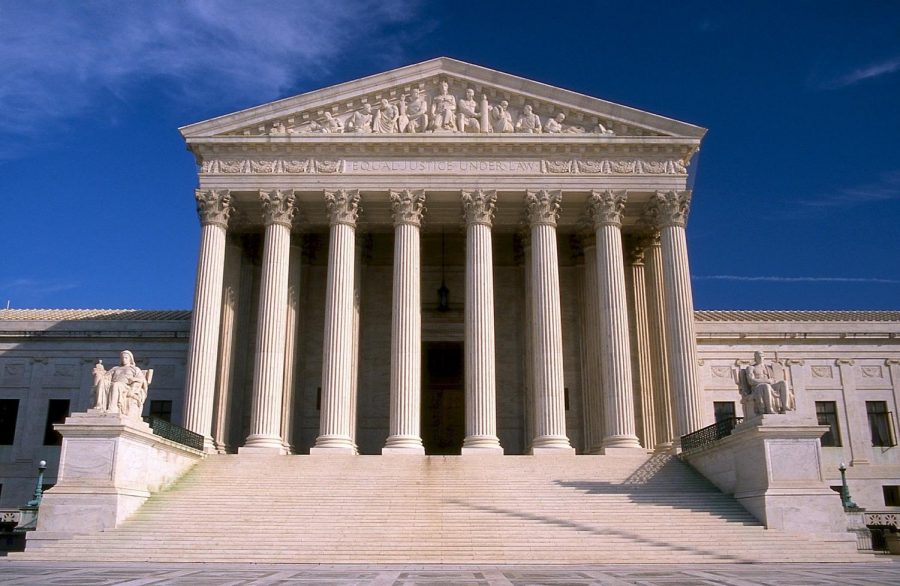 “Her legacy, even previous to the Supreme Court, will definitely last,” saidTodd Curry, Ph.D.,, associate professor of constitutional law and judicial politics at UTEP.

The recent death of Ruth Bader Ginsburg shook the nation to its core and despite the turbulent politics around the time of her death, the achievements of the second woman to serve as an associate justice of the Supreme Court of the United States (SCOTUS) are, and will never cease to be, undeniable.

The sheer attention and praise Ginsburg has gotten since her death Sept. 18, is a testament to how much she was respected, admired, and cared for by everyone who knew her, and how important her life’s work was to those who felt betrayed or dismissed by the law.

“Her legacy, even previous to the Supreme Court, will definitely last,” said Dr. Todd Curry, associate professor of constitutional law and judicial politics at UTEP. “I can’t see any Republican undo the things she did.”

As a champion of equal justice and rights under the law, RBG opened doors not only for women in law, but for women throughout the nation in male-dominated industries and environments.

She’s always been a champion for a level playing field for women.

She was the founder of the American Civil Liberties Union’s (ACLU) Women’s Rights Project, which was created with the sole purpose of achieving equal protection for women.

Through this branch of the organization, she managed to change the minds of a male-dominated Supreme Court, which had “long accepted sex-based differences as natural, upholding laws that explicitly prohibited women from serving as lawyers, bartenders, or jurors,” wrote David Cole, national legal director of the ACLU, for the New York Review Daily remembering Ginsburg.

Although, she did much more than that.

Ginsburg successfully argued in many landmarks SCOTUS cases that promoted gender equality like the Weinberger v. Wiesenfeld case of 1975 that ruled it unconstitutional for the Social Security Act to have gender-based differences and the Frontiero v. Richardson case of 1973 that struck down on gender-based differences regarding military benefits while she part of the ACLU.

Ginsburg fought against sex discrimination in America’s laws through these cases and many others, allowing more and more gender-based laws to be overturned or struck down as unconstitutional.

She is the reason women can get a credit card without a husband, or buy a house on their own, as well as be a bartender without their father being the owner of the bar, Curry explained.

“These types of achievements cannot be undone, so in this sense, her legacy will live on,” Curry said.

The effects of many discriminatory constitutional laws would remain today, had it not been for Ginsburg’s courage and valiant efforts to eliminate gender barriers and unequal circumstances for, not only women, but all the disenfranchised in America.
RBG pushed for rights
While she is most known for her achievements in the ambit of women’s rights, I came to also know her first as a defender of Black rights, with her historical dissent in the ruling of Shelby v. Holder.

In 2013, in the voting rights case of Shelby County v. Holder, the constitutionality of two sections within the Voting Rights Act (VRA) of 1965 was reviewed.

Section 5 and 4b were on trial, as the former required certain states and local governments to get federal preclearance on any changes they wish to enforce on their respective voting laws.

The second passage on trial, sub-section 4b, provided a coverage formula that determined which specific states or jurisdictions were required to obtain preclearance on any changes to voting laws, taking into account their history with racism or voting discrimination.

As a result of this ruling, section 4b of the VRA was struck down as unconstitutional, since the content and information on which the formula was created was considered outdated.

With this ruling, section 5 was also made useless, since no state will require preclearance to change their voting laws until U.S. Congress emits a new, current coverage formula to which they must be subject.

The case was concluded with the claim of Chief Justice John Roberts, which argued the need for preclearance was long gone, as if racial discrimination had entirely vanished from government, ceasing to be an influence on vital state and local decisions, specifically those concerning voting rights.

“There is no denying, however, that the conditions that originally justified these measures no longer characterize voting in the covered jurisdictions… Nearly 50 years later, things have changed dramatically,” said Roberts in his legal opinion.

In response to this absurd and, perhaps, naïve ruling, Ginsburg dissented with one of her most renowned quotes:

“Throwing out preclearance when it has worked and is continuing to work to stop discriminatory changes is like throwing away your umbrella in a rainstorm because you are not getting wet,” Ginsburg said.

Evidently, RGB was right, since that same day the Supreme Court made their decision on this case, Alabama passed a voter identification act, Texas enforced an even harsher one that would directly affect low class minority voters, and Mississippi and North Carolina followed suit, according to Joyce White Vance, distinguished professor of law and former U.S. Attorney.

This just comes to prove how much there is to be done for the protection of freedom and equality in the country.  Rather than focusing on institutionalizing mere socio-political concepts, leaders must strive to appropriate them to citizens, and make them available to all.

Ginsburg’s most notable quality is that she embodied the purpose of government and governmental officials, which is to seek out the common good for people and represent their needs and beliefs.

In spite of it being its sole purpose, government rarely works for the good of others and instead seeksindividual agendas of power, wealth, and influence.
Individual agendas and the impact of RBG’s passing on the 2020 elections
Ginsburg’s passing has raised the levels of political and ideological unrest that have plagued the U.S. sinceits birth. . More so, because presidential elections are just around the corner, making every major decision and event in the country a political one.

Although RBG’s death has left an immense legacy to live up to, it certainly hasn’t delayed President Donald Trump’s resident’s nomination for a new judge.

It was initially in debate whether a Supreme Court nomination should go forward before the Nov. 3 election. According to a national poll conducted by Reuters on Sept.19, 62% of Americans lean toward having nomination be made after the election.

Despite this, Trump announced on Sept. 24 that he will nominate Judge Amy Coney Barret, a known conservative, to fill RBG’s position in the Supreme Court.

However,  it appears Ginsburg’s death won’t influence the electoral outcomes or be used to tilt the scales.

A poll conducted by Ipsos shows voters have already made up their mind and RBG’s passing hasn’t changed or affected their decision. ()

“No, I don’t believe the outcome of the election will be affected,” Curry said. “In my lifetime, this is the least percentage of undecided voters I’ve ever seen, which is 7% to 8% of voters.”

This meansmost people know who they will be casting their vote for in less than two months.

However, this doesn’t mean Ginsburg’s passing lacks impact, on the contrary, it might just be decisive if the election reaches the Supreme Court.

If the election does come before the Supreme Court, only then will Ginsburg’s death favor Republicans regarding who gets elected president in November, Curry said.

If Barrett were to fill Ginsburg’s seat as associate justice of the Supreme Court, then it would lock a conservative majority on the high court.

Currently, the Supreme Court has five Republicans and three Democrats. However, Curry explained Roberts has voted against Trump before, making the court , four to four.

“But if they replace Ginsburg with a Republican, then that’s when Roberts vote won’t count, making the outcome five to four, Republican majority,” Curry said.

“In matters like abortion rights, for example, with conservative ideology ruling the Supreme Court, decisions like this could be overturned.Her (Ginsburg) legacy in this case will probably not be as lasting.”
Ginsburg’s legacy
Although my own Christian beliefs and convictions keep me from being entirely onboard with RBG’s agenda, she fought for equality and against disadvantage and oppression, which is something that I cannot oppose nor deny.

Her true legacy is something intangible or perhaps something undocumented in the hearts and souls of so many throughout the U.S. and in the world .

Ginsburg promoted a popular sentiment, a belief system even, that legitimized the constitutional passage that makes all individuals “equal under the law.”

Therefore, her real legacy lives in the new mindset sheasserted, where everyone should have the same rights, liberties and be deservingof equal opportunities to advanceregardless of sex or race.

Her peaceful, amicable relationships with Supreme Court opponents , likeChief Justice Antonin Scaliareflectthe kindness and knowledge that is needed in politics.

Ginsburg’s determination, intelligence, and ability to control whatever court she stood before are what defined herandmade her great. These characteristics allowed her to open many doors for women, not just in law, but across all professions and personal pursuits.

Ginsburg’s values, ideas, and achievements are something that cannot be taken away from a society that was shaped by her, no matter who her is named as her replacement or bears the title of President of the United States.

However, it is with profound sorrow that I contemplate the possible future of this nation, and I must agree with JoeBiden’s claim that this election is in truth a battle for America’s soul. A message that can also be heard through former Federal Prosecutor and Legal Analyst Mimi Rocah’s call for action.

In times of such confusion and discord, “we must step out of our comfort zones and into rooms where we may not be welcome; we must speak up,” Rocah said. “We must continue to fight the legal battles on behalf of those less fortunate and more vulnerable than us.”

On that note, I hope whoever is chosen to take Ginsburg’s seat continues to uphold the spirit and passion in favor of the disregarded, cast aside, and unfairly persecuted by the law.

In the assuring and timely words of Ginsburg herself, “real change, enduring change, happens one step at a time.”

Daniela Ramos may be reached at [email protected]; @Daniela41150119 on Twitter.