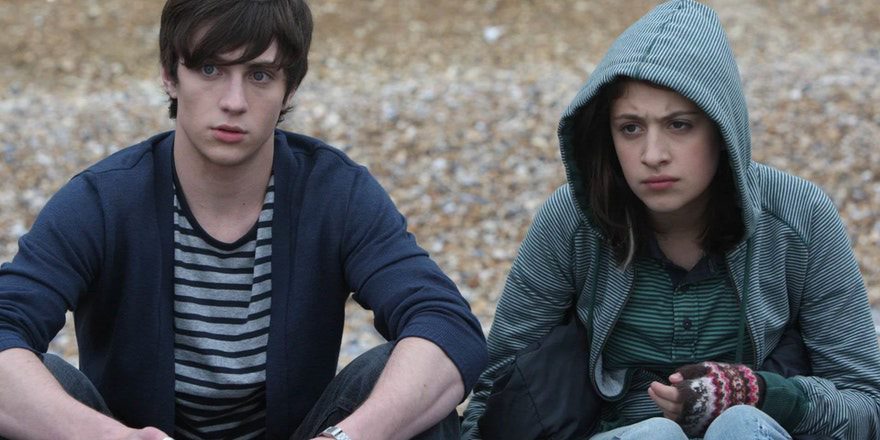 Angus, Thongs and Perfect Snogging is a 2008 teen romantic comedy film co-written and directed by Gurinder Chadha, based on the young adult novels Angus, Thongs and Full-Frontal Snogging (1999) and It's OK, I'm Wearing Really Big Knickers (2000) by Louise Rennison. Photo courtesy of Tunefind.

Being a tween in the late 2000’s, I spent majority of my middle school years reading the “Confessions of Georgia Nicholson” series by Louise Renninson. I remember reading the series with my two best friends and being so excited for the 2008 Nickelodeon adaptation of the book “Angus, thongs and full-frontal snogging.”

I would like to say I have left “Angus, thongs and perfect snogging” in my teenage past, but I quote the movie daily. I cannot be the only American girl who pretended to be British and had the biggest crush on Aaron Johnson. This movie shaped my middle school experience and introduced me to British artists like Scouting for Girls and Mumm-ra.

Twelve years later, I decided to rent the movie and determine if it is as good as I remember. Although it is a classic, I noticed aspects of the movie that I overlooked as a 12-year-old girl.

To begin, I realized the reason why the movie and books were so influential to me, is because they appealed to my teenage girl heart. Fourteen-year-old Georgia is a character that reflects what being in that weird age is really like.

Georgia is insecure about her physical appearance and her personality, something that many tween girls, including myself, went through at that age. Being a prepubescent girl is hard, and Georgia perfectly depicts some of the struggles middle-school and high school girls go through. She is constantly comparing herself to “fitter” girls like “slaggy” Lindsay and altering her appearance to look prettier for boys, particularly Robbie, one of the two new brothers in town.

Some things I did not realize or pay attention to when I was 12 years old, is the fact that Georgia is very rude and disrespectful to her perfectly normal and funny parents. Georgia embodies the angst of being a teenage girl, but watching the movie now, she just seems spoiled and mean.

As a teen, I wanted Georgia to get together with Robbie and hated his girlfriend Lindsay, but in hindsight, her relentless schemes were evil, and she was pursuing a boy in a relationship. Although I still hate Lindsay as a 24-year-old, I cannot agree with Georgia’s schemes to break up a relationship, and let’s not forget Robbie and Georgia kissed in the pool while he was still dating Lindsay.

Moreover, I realized there is only one person of color in this movie and it’s Georgia’s friend, Ellen played by Manjeeven Grewal. Grewal, of Punjabi descent, plays the only non-white character in the movie. As a teen, I did not notice the film’s lack of diversity and inclusivity.

An important part of the movie is Georgia’s 15th birthday party, which takes place at a club. I was shocked to re-discover that Georgia’s parents, with the help of Jas, organize a party for her at a club.

This movie is full of cringey moments that perfectly describe adolescence, but are unwatchable as an adult, such as the infamous “washing machine syndrome” scene where Georgia pays a boy to kiss her. However, these cringey moments are what make this movie memorable and quotable.

Perhaps my favorite scene of the movie was the final one, where Jas takes out Lindsay’s fake boobs at Georgia’s birthday party. The line, “Robbie prefers his girlfriends’ unfake,” is one that I like to quote (in a British accent, of course) in unity with my best friend to date because of how outrageous it is.

Watching that final scene now, made me realize what a corny and unbelievable ending to the movie that was. Although it remains iconic in my mind, it is bad.

I have come to the consensus that although I can no longer relate to “Angus, thongs and perfect snogging” as I used to when I was 12 years old, I still love it and will never not watch it if they play it on Nickelodeon.

I rate this movie 4 picks out of 5 because I still hold it dear to my heart and will quote it with my friends until the day I die.

Paulina Astrid Spencer may be reached at [email protected]; @paulinaaspencer on Twitter.