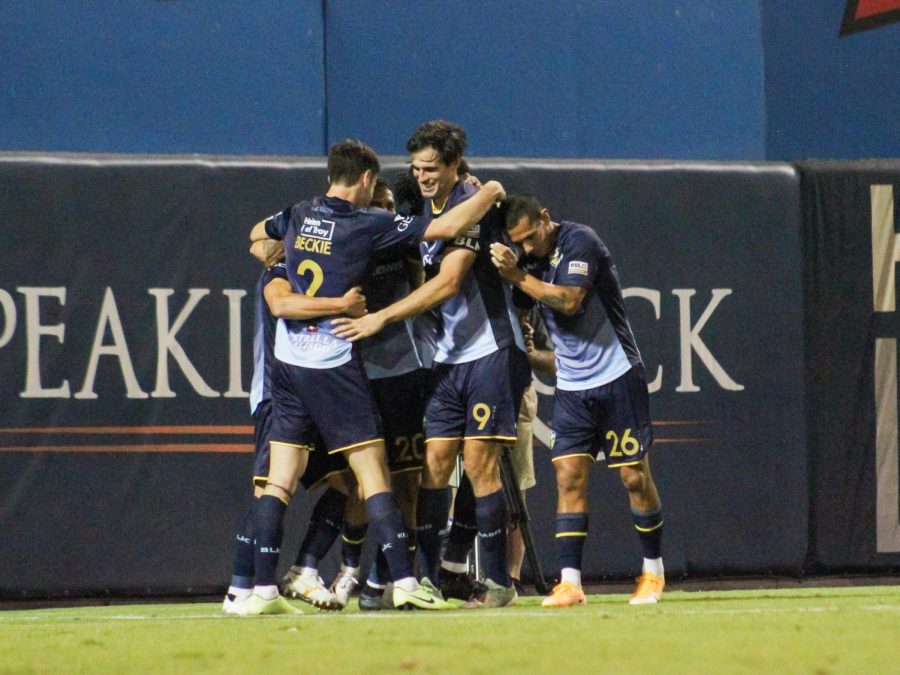 The Locos had an intense game even though El Paso dominated most of the game and dominated the stat line but had problems scoring against the visiting team.

The game’s first significant action came at the 15th minute of the match when defender Zack Farnsworth from the Real Monarchs with a volley sent the ball to the goal’s side net. Six minutes later, a great cross from Locos forward Omar Salgado found forward Aaron Gomez’s left foot just missing a goal.

At the 37–minute mark, Locos defender Andrew Fox left the game due to an injury that had plagued him since the first minutes of the game; he was substituted with former FC Juarez player defender Eder Borelli.

Borelli’s substitution changed the game entirely for the Locomotive. It was at the 47th-minute mark when midfielder Memo Diaz crossed the ball to the very inside of the box and found Borelli’s header for the first score of the game to make it 1-0.

After that, the game reverted to a ball possession game, in which the Locos averaged 58% and the visitors a 42%. It was not until the 79th minute of the game that the Locos had another scoring chance after a dangerous cross by Borelli. The goalkeeper managed to reject the ball but was left in front of the goal and a shot by midfielder  Richie Ryan sent it out to the stands.

The match was sealed with Borelli’s spectacular goal before the end of the first half, with 13 shots for the Locos for the game, one on target, nine off-target, and three blocked by the Monarchs’ goalkeeper. Monarchs had five shots, with no shots on target, four shots off target, and only one blocked shot by Logan Ketterer.

“I am proud of the guys in the end, I was a little disappointed at the halftime, I felt we weren’t doing our best,” said Locomotive Head Coach Mark Lowry.

“I’m really happy with how professional the guys have gone about their work the last few weeks; not just what you see on a Saturday but on the Monday to Friday that you don’t see, the training environment and the way they come in every morning, there is a real vibe through the group right now that there’s something special there. We know we have to keep taking care of business on the field, and we have to keep getting wins, but in general, the feeling in the group has been really good, like some real high-level pressure, and I think that has helped us get through a tough patch and win these games.”

The Locos are in the Conference quarterfinals positions, looking to stay there at the end of the season and have an opportunity to secure home matches during the playoffs.

Locomotive’s next game will be 7:30 p.m. Saturday, Sept. 27, against second-place  New Mexico United (7-4-2) next week at  Southwest University Park.

The Locomotive will go on the road after that for two matches for the final games of the regular season against the Colorado Springs Switchbacks FC and the Real Monarchs SLC. Some potential candidates to face the Locomotive at the quarterfinals can be San Diego Loyal SC, Los Angeles Galaxy II, Orange County SC and FC Tulsa.