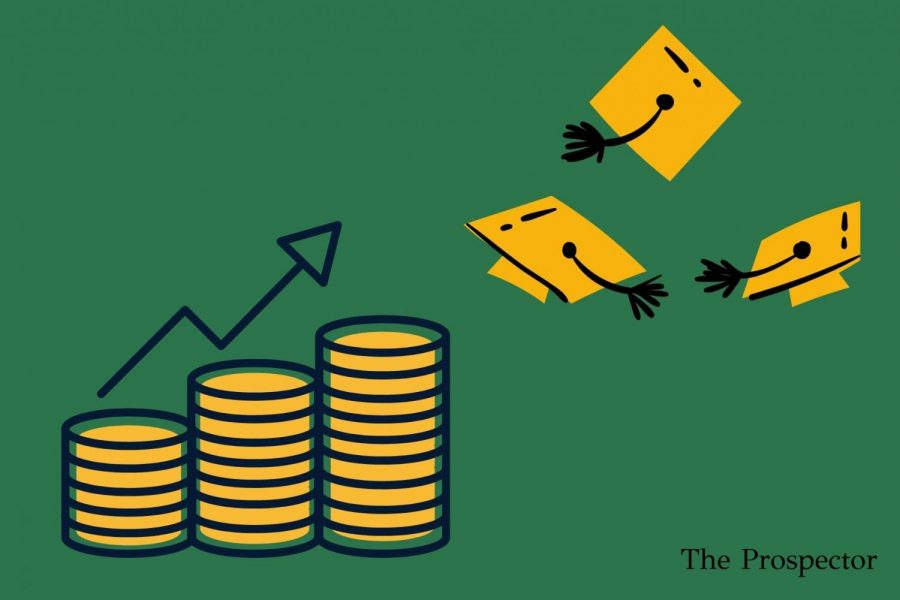 An annual report published by LendEDU, an online marketplace for financial products, reveals that the average UTEP graduate has $23,632 in student debt, ranking the university at 91 out of 475 colleges and universities in the United States for average student loan debt.

Oscar Gomez, a UTEP alumnus, said he had to take out the maximum amount of student loans each semester while he attended UTEP because he had so many things to pay for.

“I had already exhausted my Pell Grant and I had to start getting student loans to pay for tuition and books,” Gomez explained. “I was a secondary education minor, so in addition to tuition and books, I had to cover living expenses.”

Gomez also did an internship during college that didn’t even pay him.

He is just one of many people across the country who have had to take out student loans, leaving many paying off a hefty amount of debt.

An annual report published by LendEDU, an online marketplace for financial products, reveals that the average UTEP graduate has $23,632 in student debt, ranking the university at 91 out of 475 colleges and universities in the United States for average student loan debt.

The loan amounts are ranked from lowest to highest average debt with UTEP ranking ninth in Texas.

The Student Loan Debt by School by State Report compiled by LendEDU analyzes the most recent student loan debt figures for college graduates. LendEDU is a financial website that helps consumers learn about and compare financial products, including student loans. This report was based on data gathered by Peterson’s, a company that creates educational products.

The data is compiled of self-reported student debt numbers and other finical aid figures released from the extensive number of four-year public and private higher education institutions who complete a voluntary survey from Peterson’s.

“We license the data from Peterson’s and Peterson’s collects their data from a voluntary financial aid survey that each college and university fills out,” said Mike Brown, LendEDU’s director of communications. “We pay for the data and publish the stats straight as we receive it. The statewide trends and nationwide trends, we calculate ourselves.”

According to LendEDU, the average borrower in the nation from the class of 2019 left campus with $29,076 in student debt which is an increase from the year prior that had an average of $28,565 in debt.

In Texas, 51% of college graduates accumulated debt during their college career; as Texas ranked tenth in the lowest amount of student loan debt by state with an average debt of $24,655.

Utah and Connecticut ranked the lowest and highest for the average amount of student debt in the nation with $16,633 and $41,579, respectively.

In November 2019, the UT System Board of Regents unanimously voted for a 2.6% tuition increase for every student enrolled in a UT school that went into effect this fall semester.

The UT regents review each UT school’s tuition rates every two years. For the 2018-2019 and 2019-2020 school years, UTEP’s tuition was raised by 5%. It is unclear whether UTEP’s tuition will decrease for subsequent school years because of the pandemic’s economic ruin, but pressure has been mounting.

With students throughout the country mostly taking online classes, many have filed class-action lawsuits against universities for “tuition-related grievances” since students cannot enjoy on-campus perks that tuition and fees pay for due to previous bond issuances and other mandatory costs. There are at least 5 lawsuits filed by students in Texas.

In New York, graduates from New York School of Interior Design, a private institution, had the highest average student loan debt in the nation for the 2019-2020 academic year, according to the LendEDU report, with an average debt of $65,401.

According to The Century Foundation, a research firm, student debt at for-profit colleges in the United States spiked by 7% for the 2019-2020 academic year “for the first time in a decade,” while the percentage of borrowing at non-profit and public institutions decreased that same year.

However, many for-profit colleges like Grand Canyon University push for enrollment in online courses, so they recruit prospective students from everywhere, even in El Paso.

Student loans are a source of financial aid in students’ award packages as there are options as to what types of loans an individual chooses from federally insured loans, such as unsubsidized and subsidized loans.

Financial aid in the form of grants are beneficial in that it is “free money” that does not have to be repaid, but grants are based on financial need which is calculated by the difference of cost of attendance and estimated family contribution, according to Federal Student Aid.

Pell grants are one example of grants that can dwindle over time based on financial need and can change yearly.

Loans offer a backbone in circumstantial cases, as the money used from a loan may be used to pay expenses during a college student’s career that would be considered difficult without the loan.

“I had a coworker of mine that led me to options on how to pay off my loans and one of those was the income based repayment plan which is basically whatever your salary income is that determines your loan monthly payment,”  said Leonard Erickson, UTEP graduate and head coach of Milwaukee Area Technical College women’s basketball.

According to the Federal Student Aid website, most federal student loans are eligible for at least one income-driven repayment plan and if one’s income is low enough, their payment could be as low as $0 per month.

“I was in a situation where my first coaching job out of college didn’t pay much and I was literally not having to pay anything a month for student loans,” Erickson said. “Now that’s a good thing in that regard, but obviously with student loans you’re still accumulating interest.”

LendEDU provides tips on useful repayment options for college graduates with featured routes such as paying more than the minimum, paying off high-interest loans first, and working for an employer with repayment assistance. These tips could be a resource for not only recent UTEP graduates but those looking to start their student loan repayment process.

Isaiah Ramirez may be reached at [email protected]; @_IsaiahRamirez1 on Twitter

Editor’s note: LendEDU was at the center of a controversy in 2018 for pushing out its reports through the pseudonym “Drew Cloud,” who was found to not be an actual person. Mike Brown, director of communications for LendEDU, said the marketplace’s student debt report is “verifiable and accurate” because it is solely based on data gathered by Peterson’s, a reputable company. The Prospector verified the report’s number with other sources and the numbers were closely similar.