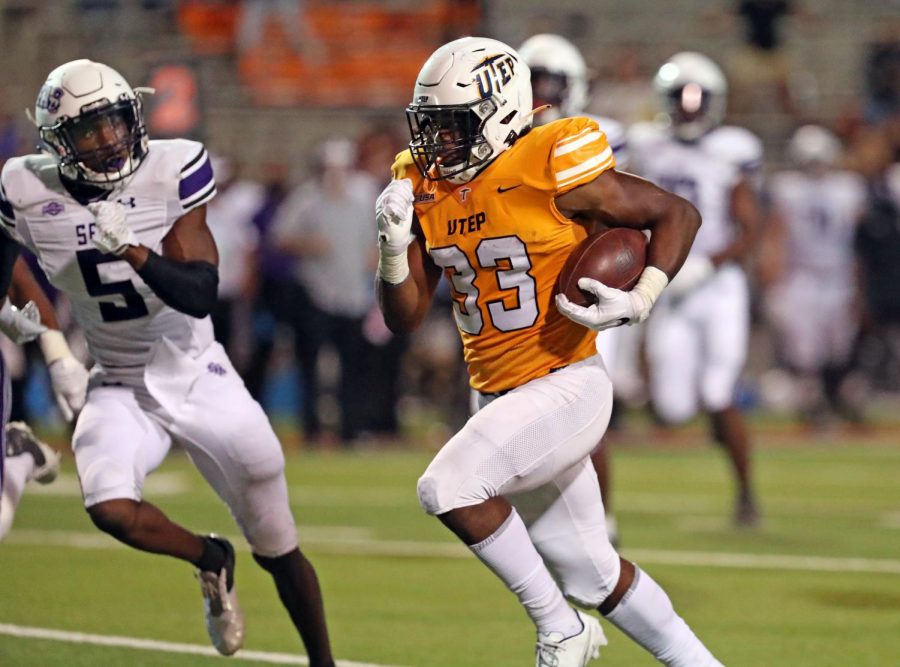 For the first time in over a year the UTEP football team earned a victory as it defeated Stephen F. Austin 24-14 in front of a restricted capacity crowd in the Sun Bowl. The Miners last win came in its season opener last season against Houston Baptist Aug. 31 2019.

UTEP has now won its season opener in back-to back seasons for the first time since the 2010-2011 campaigns.

The official attendance was announced at 6,047 for the season opener as capacity restrictions were set in place due to the pandemic as a max capacity of 18% was allowed which meant 8,600 people could attend the Sun Bowl.

Health protocols were clear throughout the Sun Bowl as masks were required throughout the stadium and seats were reserved as no general admission seating was available with fans seated with distance between each other.

Cowing, who is coming off an impressive freshman campaign where he led the Miners in receiving yards a season ago, had 116 receiving yards with seven receptions against the Lumberjacks.

Hardison made his first collegiate start after playing in two games last season and threw for 212 yards, for 17 completions and one touchdown.

“I thought the guys around me did really great with the o-line opening things around me and the skilled position guys played great,” Hardison said.

Hankins delivered a standout performance for the Miners as the backup running back to senior back Quardraiz Wadley and may have put a case as to why he could be the starting running back. El Paso’s all-time leading rusher hailing from Parkland High School met the end zone for the first time in his career with a rushing touchdown with 20 seconds remaining in the first half to the Miners ahead of the Lumberjacks 17-14.

Hankins would go on to lead all running backs with 113 rushing yards and tacked on another touchdown for the night.

“That’s the most physical I’ve watched a guy run in a long time even all my years in the Big 12,” Head Coach Dana Dimel said.

“Today definitely exceeded my expectations and the whole day I was just visualizing myself breaking out for runs,” Hankins said.

UTEP’s defense stepped up in the second half only allowing 83 yards of total offense. The Miners found itself digging out of 14-three first half deficit and would go on to outscore Stephen F. Austin 21-0 the rest of the way. Miner senior safety Dy’Vonne Inyang produced six tackles and one forced fumble for the UTEP defense.

“Lots of learning tools from our team tonight falling behind the way we did and still playing with the same fire we did,” Dimel said. “You can see how much more athletic we are defensively and we’re still at the stage where we are learning how to win football games,” Dimel said.

With a rebuilding program that has now won three games in the last three seasons starting off with a win alongside promising performances from its young talent can only swing this Miner team in the right direction.