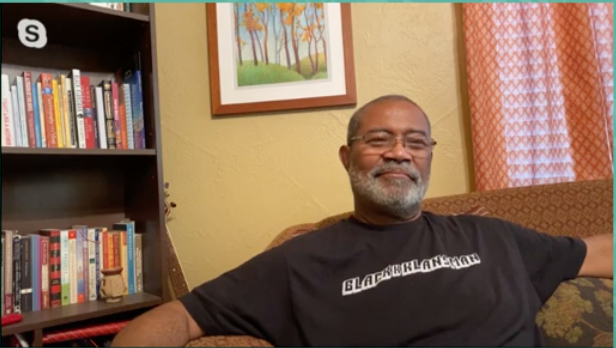 The conversation, hosted by Humanities Program lecturer, Ruby Montana, focused on discussing memorable moments in Stallworth’s life and career as the first black detective in the Colorado Springs Police Department.

“We Black officers across this country, we live in a dual world. On the one hand, we are too Black for the white citizens that we serve, but on the other hand we are too blue, as in our uniform, for the Black community of which we are a part,” said Stallworth, who was raised in El Paso. “We have to automatically learn how to navigate those waters and how to come out on top and not lose our identity as Black men, while maintaining our professional identity as police officers.”

His book, now turned into the academy award-winning film directed by Spike Lee,“BlacKkKlansman,” tells the story of how he infiltrated the Ku Klux Klan in the late 1970s.

After reading an ad about the KKK division in Colorado Springs, Stallworth decided to apply as a member by posing as a white man and speaking to the president of the chapter. Stallworth sought help from his white co-worker, Chuck, to act as him to be part of the Klan while he continued to pose as a white man on the phone.

All of this was happening at the same time as the Civil Rights Movement, which has recently been compared to the Black Lives Matter movement that has arisen following the death of George Floyd and other people of the Black community at the hands of police.

“You have this rainbow coalition, if you will, of people protesting police violence, protesting for Black Lives Matter, that is a change in the civil-rights movement of today,” Stallworth said. “You didn’t see the number of white people then that you are seeing now. That is very encouraging, because that tells me that America is finally waking up.”

This led to Montana and viewers at home to ask the author about his thoughts on police reform, to which he responded by saying that reform should not come from entirely defunding the police. Instead, the public should focus on demanding police departments look like the community they are meant to protect from an ethnic stand point and end police unions that he says grant officers too much power.

“I love my profession. I’m a die–hard supporter of my profession, but when cops break their constitutional oath and violate the law then I am totally against them, I’m against the agencies that support them and the (political) institutions that back them up,” the 67-year-old said.

Stallworth now lives in El Paso with his wife Patsy as a retired detective and shared his belief that issues like police brutality and police reform can also be solved by voting in the upcoming presidential election. Moreover, he said the change can come by voting against President Donald Trump on Nov. 3.