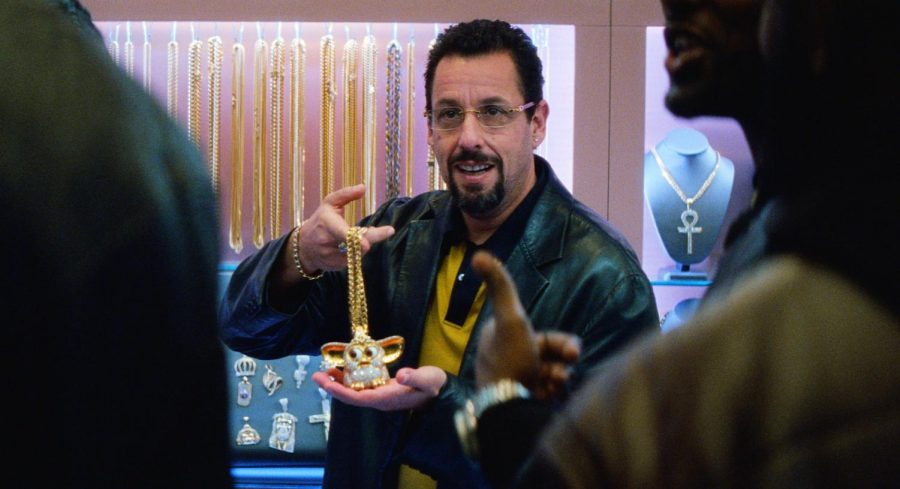 Courtesy of A24 films and Netflix

“Uncut Gems,“ is now available on Netflix for anyone that is searching with anticipation and one of the best films in recent memory.

“Uncut Gems,“ which was released to theaters in the fall of 2019, is gaining some traction back as a film that will have viewers tuned in from start to finish.

Comedy film icon, Adam Sandler, stars in the Josh and Benny Safdie directed film that earned him an Independent Spirit Award for Best Male Lead and the National Board of Review Award for Best Actor. Sandler‘s role as Howard Ratner, a gambling addict and jewelry store owner in New York City’s Diamond District is complex yet intriguing, as the audience roots for Ratner to earn a lavish payday through the act of gambling. Ratner battles his own demons throughout the film including infidelity, debts owed to a family member and a disconnection between his children.

National Basketball Association legend, Kevin Garnett, plays a significant role as himself in the film, by saving Ratner‘s grace in his debt after becoming obsessed with a rare black opal obtained by the jeweler.

Ratner‘s obsession with gambling and passion for basketball are a couple of factors as to why his relationship with Garnett is one of the most notable aspects of the film.

Considerable amounts of stress and frustration is one way to describe the film to those who have yet to see it, but that certainly will not do it justice. The combination of Ratner‘s desire to tackle multiple tasks at once, mixed with the inevitable consequences that he will be facing, is a recipe for endless suspense throughout the film.

Tony award winning actress, Idina Menzel and rising star actor, Lakeith Stanfield, produce notable roles as Dinah Ratner and Demany. Along with actress Julia Fox as Julia De Fiore as each is involved in Ratner‘s escapades one way or another.

Sandler‘s performance, I feel is Oscar–worthy as he delivers a career defining performance many did not expect, given the actor‘s track record of notoriously silly comedies. Critics feel Sandler was snubbed at the 92nd Academy Awards for the Best Actor award. This is partly due to a history of several underperforming films such as “Jack and Jill,“ which swept several top categories at the 32nd Golden Raspberry Awards. This award show honors the worst in the film industry. (hyperlink to Oscar snub https://ew.com/Oscars/2020/02/05/nominated-for-nothing-uncut-gems/).

Nevertheless, “Uncut Gems“ has gone on to be named one of the top 10 films of 2019 and A-24’s highest grossing film. This success is primarily due to Sandler‘s iconic role as Ratner, which defies the narrative that the actor can only succeed in comedy roles by instead presenting a charismatic and impulsive character set to be remembered for years to come.