IN REVIEW: Netflix’s ‘The Midnight Gospel’, an animated anthology of life-changing lessons 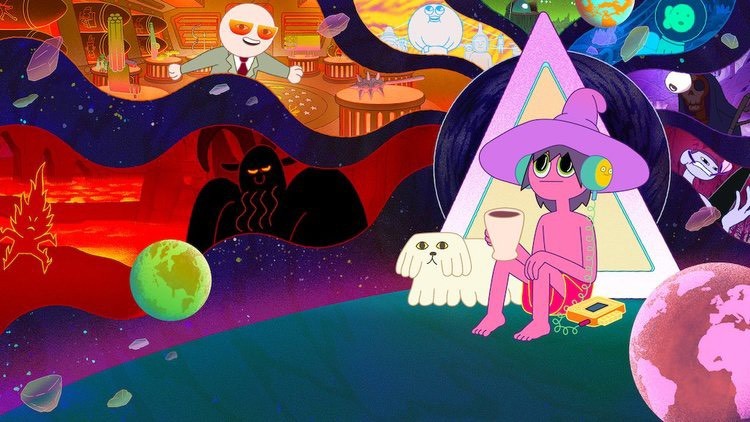 Once you let your mind take in the first episodes, “The Midnight Gospel“ quickly becomes a phenomenal source of mindfulness and wisdom.

Netflix‘s ability to take risks and speak out on difficult topics has enabled them to deliver high-quality content through their series consistently and animated content is no exception.

Adding to Netflix‘s must-watch list is “The Midnight Gospel.” The animated series comes from the mind of Pendleton Ward, the creator of “Adventure Time“ and comedian/podcaster Duncan Trussell. These fine gentlemen have teamed up to create a show that blows your mind by simply looking at the title card.

“The Midnight Gospel“ shows the life of Clancy, a young man traveling the universe on a malfunctioning space simulator while interviewing strangers in dying planets for his podcast, the “space-cast.“

If that does not sound crazy enough, the wild, colorful animation will surely set you on a trip of hallucinating visual storytelling. However, what makes this show so good is the dialogue and art style.

In terms of writing, “The Midnight Gospel‘s“ dialogue differs from any traditional scripting. The show was made using actual podcasts made by Duncan Trussell himself. Audio clips from his podcast, “The Duncan Trussell Family Hour,“ were integrated into the show‘s animation. So, in a sense, “The Midnight Gospel‘s“ meaning relies on what the characters say rather than what the characters do onscreen.

Therefore, the dialogue seems detached from the action. It would be fair for someone like myself who was not aware of this format at the beginning to assume that the dialogue had nothing to do with the action.

However, that is not to say that the art and action in this show are undermined. The detail in the art style of “The Midnight Gospel“ reminds me of the vivid yet straightforward design of “Adventure Time.“ Combined, they make this series spectacular.

Once you let your mind take in the first episodes, “The Midnight Gospel“ quickly becomes a phenomenal source of mindfulness and wisdom. It is clever, it is smart and it is hilarious.

As far as the show itself, I would not dare try and define its mad, bizarre sequence of events. But if I had to (because they pay me to do so [not really]), I would say that “The Midnight Gospel“ is an anthology of powerful, life-changing lessons inside surreal 20-minute animations following a fascinating narrative.

Certainly, now that I think about it, “The Midnight Gospel“ feels quite like the mad, capitalist and internet-mediated world in which we live.

Hugo Hinojosa may be reached at [email protected]