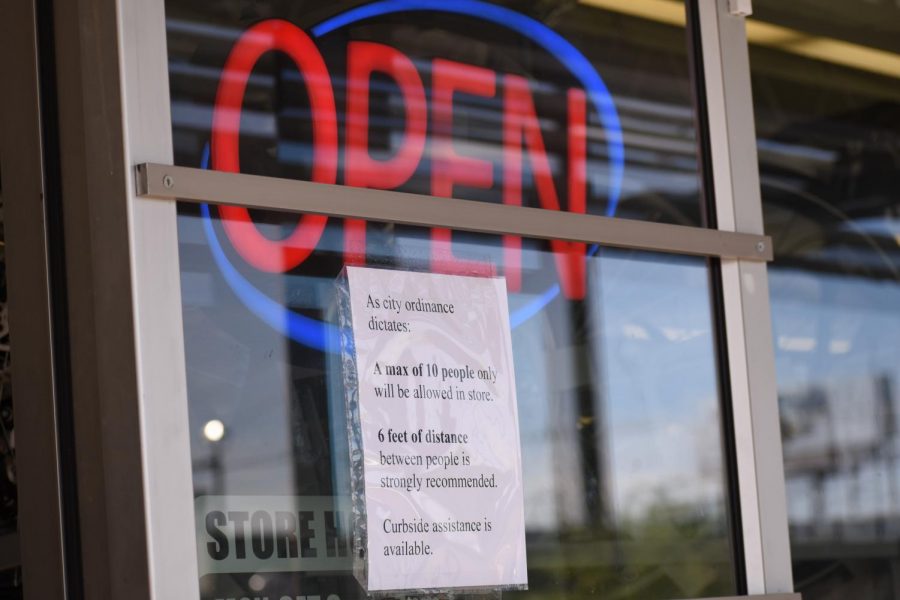 Local businesses in El Paso near UTEP have managed to remain open through the saving grace of curbside pickup and/or delivery.

As COVID-19 continues to ravage the global economy, small businesses throughout the country have scrambled to keep their necks above water. Many have already laid off employees or just completely shut down.

In El Paso, local businesses near the University of Texas at El Paso (UTEP) such as Kaedama, Cereal Killers, Insomnia Cookies, Kinley’s House Coffee & Tea, Hillside Coffee & Donut Co., and Tippi Teas have managed to remain open through the saving grace of curbside pickup and/or delivery.

Hillside in West El Paso has felt the drastic economic impact of the pandemic, resulting in layoffs but the business has continued to tread onward by fulfilling orders through curbside pickup and drive-thru and by offering new refillable cold brew growlers.

“The only difficulty I’ve faced in being employed at a local restaurant is being laid off,” said Victoria Luna, a UTEP student and now former barista at Hillside. “Obviously without the dine–in aspect of food service, there’s really no need to have so many people working.”

Savage Goods, a local bakery and coffee shop along Oregon Street, announced its temporary closing on March 22 through Facebook as “the best way to protect our customers, our team and our community.”

“I think that the halt to life itself caused by COVID-19 is something that each one of us is struggling with, but a lot of people were and had no choice but to stay home and adjust,” Luna said.

Weeks later, on April 8, Savage Goods posted again on Facebook on how customers can continue to support the business even though it shuttered.

But Savage Goods is not the only local business to close its doors.  Hope & Anchor, a local bar only a few blocks away from UTEP, announced a fourteen-day closure due to the area’s stay-at-home order in a Facebook post stating, “Unfortunately we are closing for a minimum of 14 days due to the City Ordinance. We love you and will keep you updated on any developments. We love you El Paso. Stay strong and healthy.”

As some businesses close shop, others have adapted their business model by offering new products and new discounts for essential workers working during this crisis. Cereal Killers, a cereal bar on Boston Avenue, announced a 15% discount for first responders, medics, and law enforcement on coffee and treats in response to this issue.

Kaedama, the ramen shop next door, has also tried to ease the pain by offering a new $5 noodle basket that can be cooked at home.

Kaedama also announced a new line of trendy t-shirts designed by EP Bar Wears (EPBW), a new online outfitter founded solely designated toward aiding the El Paso community by raising funds for the unemployed, in which all proceeds will be donated to the Paso del Norte Community Foundation’s El Paso Food and Beverage Fund that will be used to provide aid to El Paso’s unemployed workforce.

EPBW founder, Andy Martinez, took initiative to start up EPBW with newfound time during the quarantine with a mission to aid those unemployed in El Paso. “I am a writer and art director at a local El Paso magazine so I thought about the ways in which I could potentially make a positive impact during this time.” Martinez said.

“As I was trying to come up with ideas, I came across Coel Studio, a design firm based out of Salt Lake City that had begun their own method of fundraising for their local community fund. They created the original Bar Wears,” Martinez explained. “I was inspired by the action they took so I reached out to them to ask for some guidance so that I could start something similar in El Paso.”

In collaboration with friends Jesse Maynes and Kristen Brown, the trio plans on reaching out to any other businesses, bars, restaurants, and coffee shops who wish to give aid to industry workers with no cost to sponsorship to create products of various degree.

“We plan to leave the shop open as long as service industry workers continue to be impacted by the pandemic. Whether we expand or close-up is yet to be determined, as our current focus is not to personally profit.” Martinez said.

Only a stone-throw away from UTEP, Kinley’s remains open for business with a more drive-thru oriented approach for transactions. A new happy hour special from 2-7 p.m. gives customers a free shaken iced tea with the purchase of sandwiches with any of their three sides of salad, chips or soup.

While the pandemic has spelled economic ruin for many small businesses, other have risen to the occasion by modifying their business model.

A new surge of business

Crazy Cat Cyclery (CCC) down the street from UTEP is a business that’s stepped up to fill a need during this time of crisis. In a Facebook post, the business said, “While many in our community are working from home, there are still others who do not have that option and rely on bicycle transportation to get to and from work.”

With an intensified popularity in outdoor activities, predominantly walks and cycling, cycleries have seen a boom in sales across the country and CCC is no exception.

With so many recreational businesses and destinations closed, CCC satisfies that want and need individuals that have to go out.

“We have seen a huge uptick in new consumers interested in cycling. With many other businesses, including gyms, closed currently, people have been searching for healthy, physical entertainment that they can safely participate in.” Waller said. “Cycling can fulfill those needs.”