IN REVIEW: The relevance of Edgar Allan Poe’s ‘Masque of the Red Death’ in the era of COVID-19 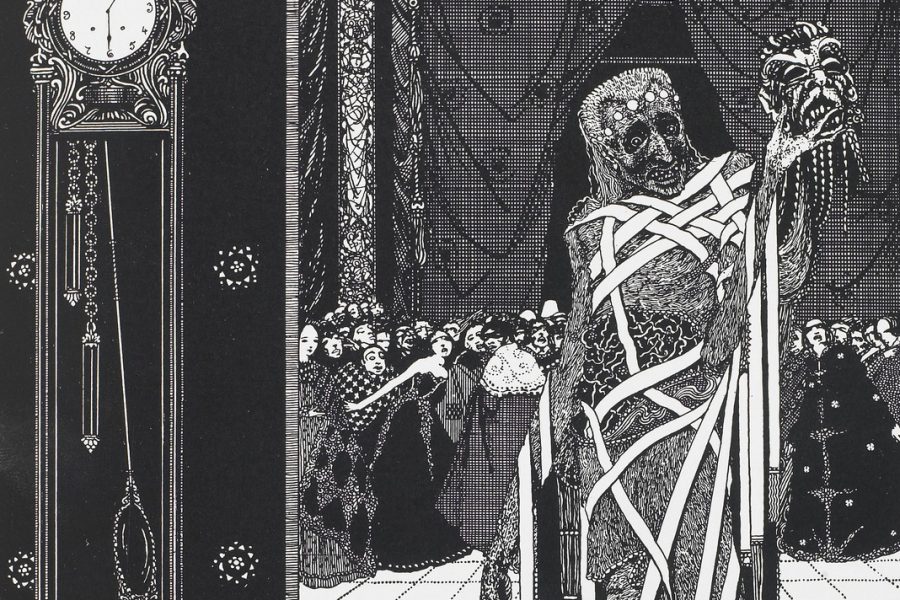 Courtesy of The British Library

"The Masque of the Red Death" is a short story by American writer Edgar Allan Poe, first published in 1842.

The coronavirus pandemic that’s been dominating news headlines throughout the world has been compared to Steven Soderbergh’s 2011 film, “Contagion” but it can also be compared to Edgar Allan Poe’s 1842 short story “The Masque of the Red Death” — a macabre tale of a deadly disease called the Red Death that spreads like wildfire and wipes out half of the population.

“There were sharp pains, and sudden dizziness, and then profuse bleeding at the pores, with dissolution. The scarlet stains upon the body and especially upon the face of the victim, were the pest ban which shut him out from the aid and from the sympathy of his fellow-men.” is how Poe describes this gruesome disease in the short story.

Although Poe’s short story is completely fictional, the American poet who was inspired by existing diseases relied on biblical symbolism and takes upon a realistic approach to human behavior that resonates with today’s current events and the public reaction.

The story tells the tale of Prince Prospero amid a deadly plague. With half the population gone, he gathers a thousand of his courtesans in seclusion behind the walls of his castle and locks the gates to keep the plague away. The prince keeps his guests at comfort by providing them with all resources and appliances of pleasure.

On the sixth month of the lockdown, Prospero stages a masked ball held in seven rooms. When the clock chimes midnight, a tall terrifying figure covered in bloody garments enters the ballroom, only to reveal itself as the red death.

Over the decades the world has witnessed an outbreak of threatening viruses including pandemics such as the severe acute respiratory syndrome (SARS), swine flu (H1N1), Ebola and influenza, commonly known as the flu.

COVID-19 was first identified in December 2019 in Wuhan, Hubei, China but was not recognized as a pandemic by the World Health Organization (WHO) until mid-March.

According to the New York Post, Chinese scientists were aware of coronavirus’ deadly effects but were ordered by the Chinese government to suppress all evidence, evidently, resulting in an uncontrollable pandemic that has led many countries to lock down and undergo a quarantine.

When analyzing the symbolism behind Poe’s Masque of the Red Death, Prospero represents the end of feudalism. The prince only invites the wealthy knights and ladies of nobility into his castle, at the expense of peasants and commoners, representing a socioeconomic divide.

The castle symbolizes mankind’s effort to prevent death, with its seven rooms representing the stages of life as well as an interpretation of Prospero’s indulgence in the seven deadly sins.

In the end, the masked intruder symbolizes the inevitability of death, which descends upon the Prince’s gala, where the words of another poet, James Shirley in ‘Death the Leveller,’ come true.

“There is no armor against Fate; Death lays his icy hand on kings.”

This was evident in the present reality, when the United Kingdom and Iran’s cabinet ministers tested positive for COVID-19.

“Masque of the Red Death” serves as a parallel not only to the tragic deaths it can foresee, but in the lack of morality in human behavior.

The world now faces an economic struggle in which businesses are forced to close, resulting in an economic slowdown. Lawmakers seem to care more about their financial stability and self interests. Basic home resources are scarce due to panic-buying and hoarding, restricting others’ ability to find basic household items.

History often tests human morality and decency upon those who lead, mostly affecting those acting out of greed and egoistic behavior.

Many life lessons can be learned through classical literature and Poe’s short story resonates today as a cautionary tale in times of emergency and precarity.