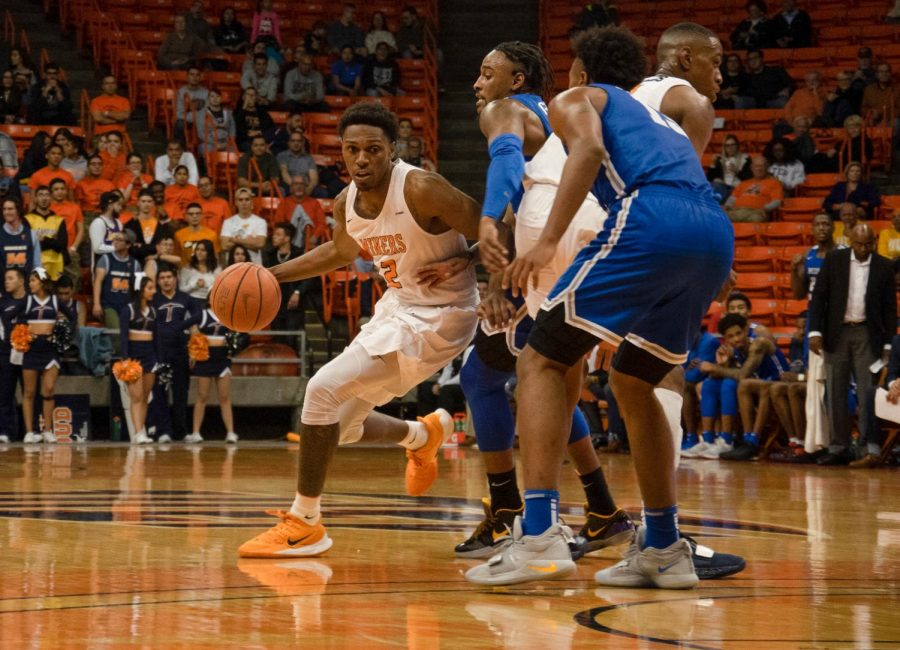 A disappointing season for the UTEP Miners just got even worse, with two prominent players entering the transfer portal once again — sophomore guards Jordan Lathon and Nigel Hawkins.

Eliminated from the conference tournament by Marshall, UTEP was able to avoid an abrupt end to its season due to the novel COVID-19. What UTEP was unable to avoid was the turmoil that plagued the team most of the season. Lathon and Hawkins are no strangers to the transfer portal, but they’ve once again put themselves in a position to transfer.

Lathon dealt with family issues around the holidays and left the school to be close to home in Missouri. Before leaving the team, Lathon was the starting point guard and averaged 6 points a game. Reconsidering his decision to leave the team, Lathon came back, but was no longer a starter until an injury to Hawkins. Off the bench, Lathon did not score a field goal during his first seven games back with the Miners. Lathon started the last seven games of the season for the Miners.

Reduced minutes and a bench role did not sit well with Hawkins, so it was not surprising when he entered the portal. As soon as Lathon entered the portal, Hawkins decided to come back to the team in anticipation of his playing time increasing. Hawkins started the next 10 games for the Miners even when Lathon returned. For the season, Hawkins averaged a disappointing 4 points per game and ended the season nursing an injury that kept him out since Feb. 6.

Both Lathon and Hawkins as freshmen averaged double digits in scoring and were looked upon as foundations of UTEP’s future. Hawkins averaged 12.6 points a game and Lathon averaged 10.9 as starters for the 2019 team. A top 150 player out of high school, Lathon has excellent size for a guard at 6-4. Hawkins comes from a family of NBA talent with his father and uncle both playing for multiple professional teams.

Neither player was able to show improvement from the previous season and their play declined with the presence of the new players. The offensive scheme for the Miners never seemed to give either player a chance to use their best skills to help the team. Guard play was criticized all season by Head Coach Rodney Terry, who gave both players a very short leash.

Bringing seven transfers, including many from his previous job at Fresno State,  Terry already had two players transfer after his first season. Guard Evan Gilyard transferred to I-10 rival New Mexico State Aggies while forward Kaosi Ezeagu went to the Kansas State Wildcats.

Gilyard ruled eligible in December and went on to start 11 games for the Aggies, averaging 7.5 points a game while shooting 40% from the 3-point line. A two-year starter for UTEP, Gilyard led the Miners in scoring during the 2019 basketball season with 13.7 points a game as a sophomore. Ezeagu sat out the season for the Wildcats and will have three years of eligibility remaining. Ezeagu started eight games for the Miners in the 2019 season and shot a team-best 57% from the floor.

Two high school recruits backed out of their commitment with the Miners before the start of the season. Brendon Wenzel, a 6-6 guard out of San Antonio, decommitted from the Miners and signed with the University of Utah. The 18th ranked high school prospect out of Texas red shirted his first season with Utah. Jessie Zarzuela, a 6-3-point guard out of Houston, committed to Navarro Community College after initially deciding on UTEP. A packed roster of transfers, as well as lack of room on roster and coaching turnover, were some of the reasons leading up to not adding these two players.

The question is now, how many other players could enter the transfer portal. There is speculation that there will be another name or two. The most likely name to enter the portal is Efe Odigie. Starting 21 games for the Miners and leading the conference in rebounding as a freshman, Odigie found himself a seldom-used reserve with a minimal role on the team this year.  Averaging 12 points and 10 rebounds a game last season, Odigie saw his numbers fall to half of that production.

Much of the turmoil of the season started around the opening of the initial transfer portal after a 9-4 start. The Miners went 8-11 the rest of the season and never contended in the conference. Terry now has two fewer point guards and no sure options on the current roster. Sophomore Souley Boum is a possibility to take over the point, but that could affect his offensive ability. Over and over again this season, Terry has stated the team needs a point guard, and the transfers have given him some roster space to go and find that person.

“You have to adapt and adjust,” Terry said. “Roster management — you’re continually working on that. This is everybody, not just us … Kids transfer no matter what. Teams that win 25 games have four, five, six transfer.”

Point guard play was an issue this season, but hardly the one question mark that held the team back. Year three may be the year that Terry proves his value as a recruiter and a coach. Currently, the team seems to be heading in the wrong direction.