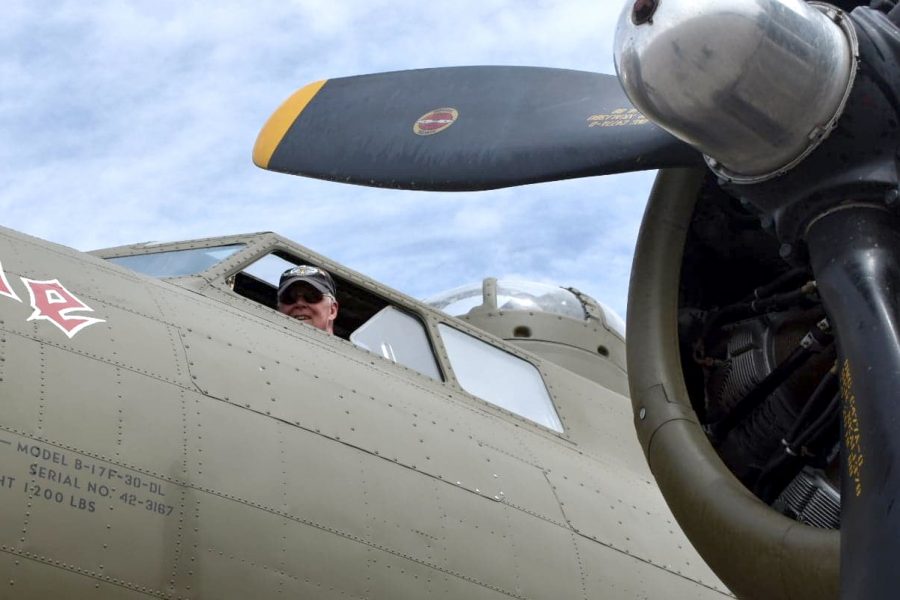 The Liberty Foundation’s “Salute to Veterans” nationwide tour made a stop in El Paso March 7 and 8 at the El Paso International Airport.  The public was encouraged to visit and fly in the B-17 “Ye Olde Pub,” a World War II bomber.

The aircraft pays tribute to the story of a young American crew on a bombing mission to Germany. This mission would result in half the crew being wounded or dead, with their extremely damaged airplane being escorted back to safety by a German pilot. The German pilot did not have the heart to shoot down the young American crew aboard the B-17. This act of chivalry and bravery has been called, “the most incredible encounter between enemies in World War II.” It is detailed in the best-selling book “A Higher Call” by Adam Makos.

“It’s the first time that we have the ‘Ye Old Pub’ in El Paso,” said John Fowler, Liberty Foundation director of fly operations. “A big number of these airplanes are going to museums to never fly again, so our goal is to keep it working so you don’t have to go to a museum to see them.”

The Liberty Foundation’s plane was built toward the end of the war and never saw any combat. It is painted in the colors and nose art of the original “Ye Olde Pub” B-17 that flew with the 379th bomb group of theEighth Air Force. More than16 million Americans served during World War II. Today, according to the US Department of Veterans Affairs, only 558,000 are still alive.

“We don’t want generations to forget that sacrifices were made to give us what we have,” said Jim Lawrence, a veteran who served 39 years and went to four wars as a fire pilot. He served in the Army, the Air Force and as a Marine.

The operating cost of a flying fortress is more than $5,000 per flight hour. The Liberty Foundation spends over $1,000,000 annually to keep the “Ye Olde Pub” airworthy and out on tour. Rides are offered at $475 for the public and $450 for Liberty Foundation members.