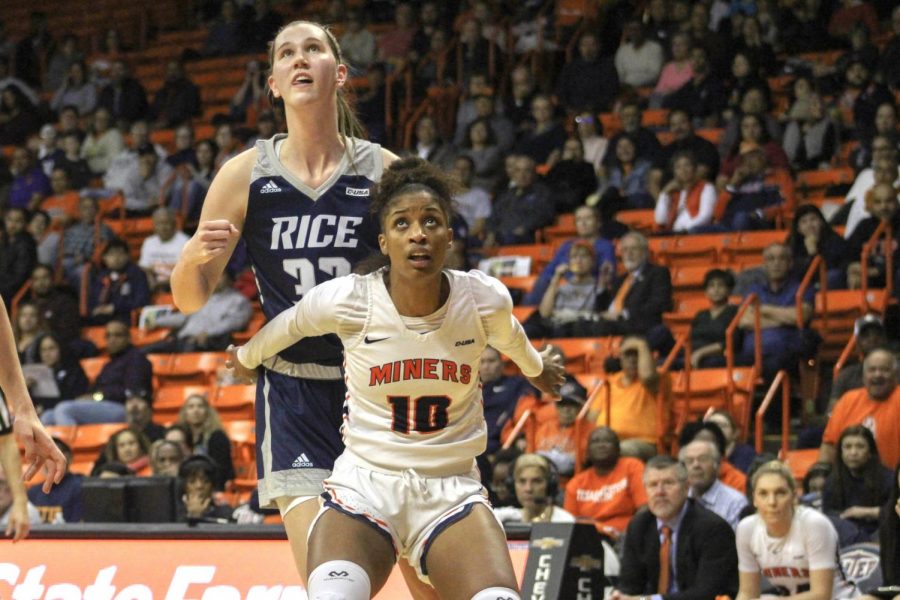 The regular season finale did not go as planned for the UTEP women’s basketball team as it fell to the North Texas Mean Green 68-58 on the road. Now the Miners will look to regroup and battle Florida Atlantic in the first round of the Conference-USA tournament. The Miners are the seventh seed while the Owls are 10th seed. UTEP dismantled Florida Atlantic 96-65 at the Don Haskins Center Jan. 4

In the conclusion of the regular season, Florida Atlantic, Southern Miss and Marshall were in a three-way tie for eighth place with a record of 7-11 in Conference-USA play. The Owls ended up finishing as the 10th seed in the Conference-USA tournament due to tiebreaker rules.

Last season, the Miners rang out the upset siren, defeating Marshall 64-56 in double overtime in the first round of the Conference-USA tournament with seven active players on the roster.

The Miners path to the tourney this season included a revamped roster, constant defensive intensity and a young core that showed they belonged at the Division I level.

Freshman Katia Gallegos is third on the squad in points with 9.7 and leads the team and Conference-USA in assists with five per game. Gallegos recently broke the UTEP freshman record for most assists in a season with 146 assists thus far and was named to the Conference-USA Freshman team by league officials.

Freshman guard Avery Crouse has stepped up for the Miners in recent games, with four double-digit scoring performances in her last five games played while also putting up 15 points in the regular season finale versus North Texas. Crouse is third on the team in 3 pointers made with 21 and fourth on the squad in points with seven per game.

UTEP’s young core looks upon veteran leadership and guidance in the form of senior guard Katarina Zec and forward Ariona Gill. Zec and Gill lead the team in scoring with 12 points and 11 points, respectively.

Zec leads the team in minutes per game (31.8) three- pointers made (41) and was named to the All-Conference-USA second team by league officials.

Florida Atlantic is led by graduate transfer guard Crystal Primm’s 15 points per game, which is sixth–best in Conference-USA. The Owls are also anchored by freshman guard Lotta-Vehka–Aho who averages 12 points per game and sophomore forward Juliette Gauthier’s 11 points per game.

The Owls have struggled on the defensive side of the ball this season, allowing an average of 68 points per game, which is second worse in Conference-USA.

In the Miners last matchup against Florida Atlantic, it earned its largest halftime lead in a conference game in program history (47-25). Gallegos earned her first career double-double (11 points, 11 rebounds), in the Miners 96-65 win.

The winner of the first-round battle between UTEP and Florida Atlantic takes on Old Dominion in the second round at 1:30 p.m. March 12 in Frisco, Texas.

UTEP takes on Florida Atlantic 12:30 p.m. March 11 in Frisco, Texas, in the first round of the 2020 Conference-USA Air Force Reserve Conference-USA Women’s Basketball Championship. The game will be streamed on ESPN +.

Isaiah Ramirez may be reached at prospector@utep.edu