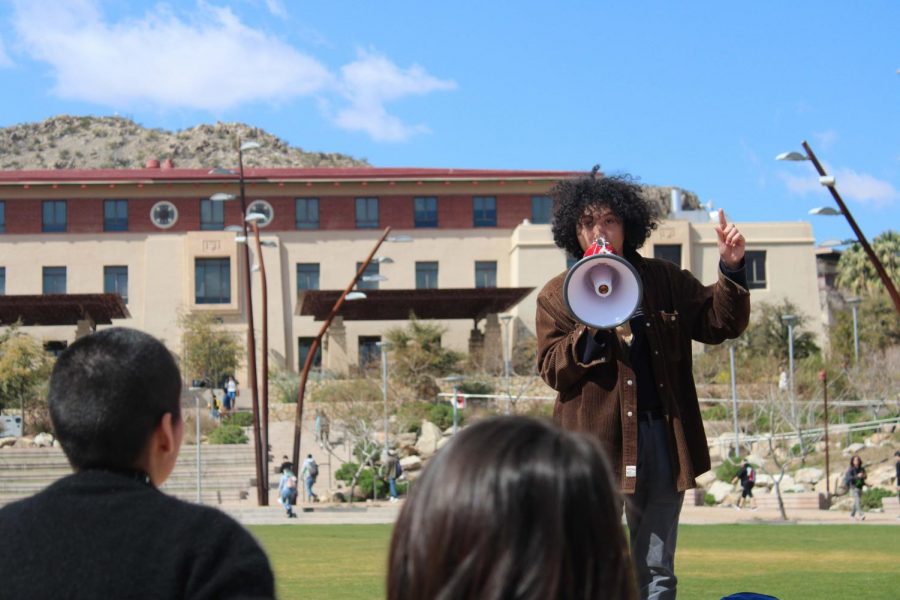 UTEP student speaks at Centennial Plaza on March 5 in front of audience members opposing a gas pipeline planned on being constructed on indigenous land.

Dozens of students from the University of Texas at El Paso (UTEP) walked out of their classrooms to stand in solidarity with Wet’suwet’en Nation land defenders opposing the construction of TC Energy’s Coastal GasLink’s multibillion-dollar pipeline project Wednesday.

The student-led demonstration, organized by biological sciences senior Adan Saenz, was held as a symbol of support for Wet’suwet’en hereditary chiefs who say the pipeline seeking to be constructed is trespassing unceded indigenous territory in northern British Columbia.

“We know this is part of a history of exploitation and struggle for indigenous people,” Saenz said.

The proposed 670-kilometer pipeline would cut across 22,000 square kilometers of one of Wet’suwet’en Nation’s oldest camps, in order to transport liquified natural gas to the coastal community of Kitimat. Hereditary chiefs oppose the construction on the grounds that it could contaminate traditional territory they have claimed authority over, as they rely on the land to harvest food, medicines and draw water.

As protestors and defenders of the camp face arrests and intervention from the Royal Canadian Mounted Police, hereditary chiefs have stated that under Wet’suwet’en law, the band councils don’t have authority or jurisdiction over what happens in the nation’s traditional territory and have “condemn(ed) the RCMP’s use of intimidation, harassment and ongoing threats of forceful intervention and removal of the Wet’suwet’en land defenders from Wet’suwet’en unceded territory.”

This has inspired people all around the world to stand in unity with Wet’suwet’en Nation, including people from communities facing similar problems. According to Saenz, El Paso is one of them.

“Our struggle here in El Paso is inextricably linked to the struggle in Canada,” Saenz said. “JPMorgan Chase is trying to block in decades of new seals to omissions and they’re escalating global warming and putting all our lives at risk.”

In June 2019, El Paso Electric announced its agreement to be sold for $4.3 billion to the Infrastructure Investments Fund (IIF), an organization affiliated with JPMorgan. Opponents of this deal argue that through this, the 117-year-old company could potentially give the big bank tremendous information advantages that can be used to trade for profit. Protestors have tried to delay the sale until IIF’s ownership structure is reviewed.

“I hope people get a new perspective,” Saenz said. “I want people to open up their minds and their worldviews and know that there’s other struggles going on; and that what we’re facing is also what other people are facing elsewhere in the world. I want people to feel the global solidarity that we can build and develop so that we can find our way through this crisis.”

Both issues have strongly involved the topic of global warming, which is a primary concern for Cheyanne Lozano, a member of the Navajo Nation and UTEP alumni.

“For Navajos, there is no heaven. This is the life we’re given. We came from the earth and it is what we leave,” Lozano said. “What I want to leave is a world for the future. It’s not about me and my comforts. It’s about the next generation.”

Lozano says that although oil and other non-eco-friendly commodities may have a modern convenience, they are harmful to the planet, and there is no good in keeping up with something that is harmful.

“As a society, we have to change,” Lozano said. “We as college students who are going to become the next generation have to make our voices heard … At some point, if you get enough people yelling in a room, someone’s going to hear them.”