The shuttle system at UTEP has a lot to improve 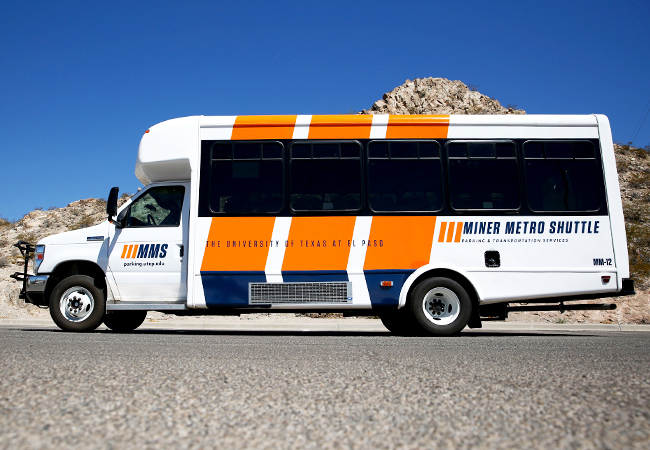 As a UTEP student, I always find myself pondering what is more worth it: the $360 parking or the free, remote parking. A factor that always comes into play during this internal debate is UTEP’s Miner Metro (MM) shuttle system.

You can arrive to campus 30 minutes before class and wait at the shuttle stop and still arrive fashionably late. I’m going to be honest and harsh: the Miner Metro  shuttle system is incredibly unreliable.

It has happened to many of us. Like a good college student, you arrive to your nearest UTEP shuttle stop 30 minutes before your class starts, anticipating it to arrive so you can sit, or stand and be jostled if the bus is packed, but it’s now 15 until your class starts and the shuttle is nowhere in sight.

“Where is it?” you scream internally. Minutes pass and, if you are at the stop in front of the UTEP Student Recreation Center, you see it approaching, but hope quickly fades as it turns into the shuttle depot.

If this or something similar has happened to you, do not fret. Or do, because you are arriving late to class and you are more than likely not the only one.

I have never paid for parking in my three years of attending this university. Why should I pay about $360 or more for some of the worst parking a school has to offer? Anyone can argue that paying for parking will get you to class earlier, but at what cost and risk? Getting to campus at 7 or 8 a.m. just to struggle to get through congested traffic over the few remaining parking slots left. There is so much stress that comes with paid parking that it makes one debate over purchasing it at all.

I have learned that parking remotely and catching the shuttle was perhaps the most economical choice to make and, overall, I find it to be the better option, but there are issues getting around campus by shuttle. Unsurprising to most, one of the shuttle’s biggest issues is the timing. There are multiple shuttles on duty for just one route, yet we are still waiting long periods exposed to the often harsh heat or cold to get picked up. On good days, the shuttles arrive at each stop within 15-minute intervals, which is relatively not bad, but take the shuttle between 7 and 10 a.m. and you can find yourself waiting a while. Or say you are a tad late getting to the stop, you hear it pass right by you and next thing you know you are running for your life. Some drivers are pretty good at waiting for you to catch up and give you a lift, but most of the time, even if you are just a few feet away, the shuttle takes off without you, leaving you in the dust and late for class.

This is a battle I fight every day. I live on the West Side and get to school relatively early. I cannot even begin to imagine the frustration someone from the East Side or Ciudad Juárez must go through in the same situations.

Another issue is crowding. I understand; everyone and their mother is hoping to hitch a ride to class, but there is an issue with capacity on the West route shuttle — perhaps the most used and useful shuttle in UTEP’s arsenal — being two large Ford E-450 shuttles set on this route that are barely able to carry the plethora of students rushing to class that still manage to get crowded to maximum capacity.

At the Miner Metro stop outside the Fox Fine Arts building, where many students and faculty congregate by the dozens, there is mass boarding onto just one bus alone, and if it’s the smaller-sized E-450 shuttle and it doesn’t stop before your feet, then you can probably forget about getting to work early.

Standing at 5 feet 6 inches tall, I struggle to hold onto the handlebars while riding the shuttle daily. I have counted eight to 10 hand straps on just the large E-450 shuttles alone and six to eight and sometimes none on the smaller one. I understand that not everyone is so short as to not reach the handlebars or that someone will surrender their seat to the poor shorty who is struggling to reach, but this is not a fairytale where everyone does the right thing.

There are so many improvements that need to be done for the shuttles. I suggest UTEP implements, at the very least, two larger shuttles, get its time management and scheduling in order (I mean, have they even learned anything from their University 1301 courses?) and, finally, place some more hand straps. If there is money to be spent constructing another fountain next to Centennial Plaza and the Geology building, then there is plenty of money to implement all of the above within the MM shuttle system.

Sven Kline may be reached at [email protected]u