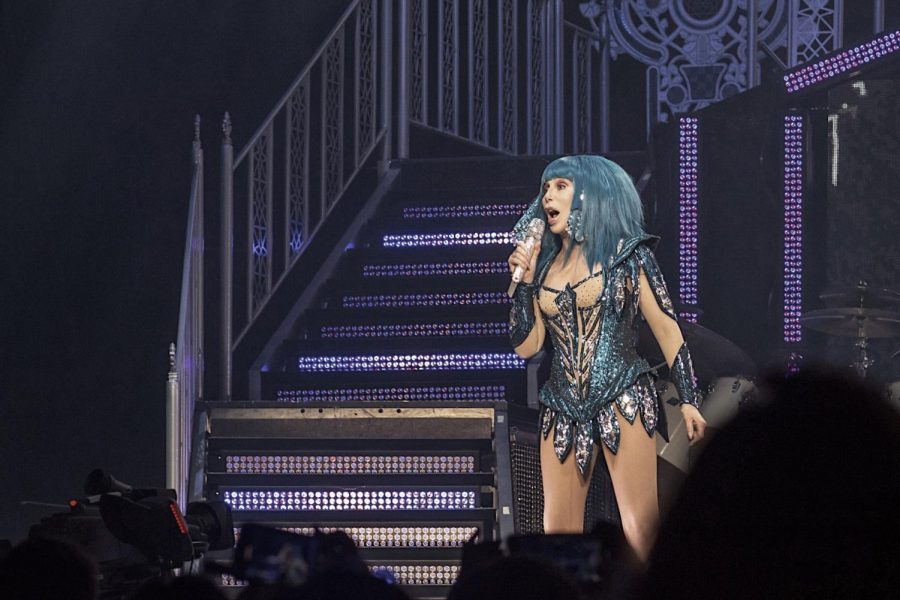 Cher, often referred to as “The Goddess of Pop,” stunned an El Paso audience with iconic hit performances and words of inspiration for women last Friday at UTEP’s Don Haskins Center.

The singer, actress and television personality made an appearance at the borderland as part of her 2020 “Here We Go Again” tour, alongside fellow disco legends Nile Rodgers and Chic. The concert highlighted some of Cher’s most iconic career moments as an artist that has worked in various areas of entertainment and has continuously been a female role model in a male-dominated industry.

“Just to see her pose is a dream,” said Elsa Perrales, who attended the concert with her daughter Paula. “The music is a bonus and the fact that I love her as an actress just tops it off.”

The concert opened with her 2013 hit, “Woman’s World” off her 25th studio album “Closer to the Truth,” where blue-haired Cher appeared before a cheering audience.

“I love all the towns that I go to, but somehow I especially remember you,” said Cher, who revealed she was sick but didn’t want to disappoint the crowd by canceling the show. “This show will be brought to you by stubbornness, heart and a little technical assistance.”

With her enchanting charisma, Cher continued to work her way through an assortment of tunes from her long career, including “I Got You Babe.” Through this song, the Grammy award winner paid tribute to her late husband of 10 years, Sonny Bono, and their success as a husband-wife duo best known as Sonny & Cher.

“I grew up listening to Sonny & Cher, and eventually just Cher,” said Tracey Benson, who first saw the singer live in 1968, when she performed under Sonny & Cher in what used to be the Northgate Theatre in Northeast El Paso. “She is so versatile in the music industry and she’s always been so popular throughout the different genres that she’s gone through.”

The night followed with other popular Cher songs like “Welcome to Burlesque” from the 2010 film of the same name starring her and American singer Christina Aguilera. The Goddess of Pop also sang songs from her most recent album “Dancing Queen,” a tribute to the Swedish pop supergroup ABBA,  including “Waterloo,” “SOS” and “Fernando.”

“She’s positive for everybody and equal,” said Marta Gallegos, a nurse at the University Medical Center in El Paso, who was accompanied at the concert by five other fellow nurses. “She brings everybody in, I mean look at the diversity that’s here tonight. She’s awesome.”

The show was held in a packed venue, as fans filled almost every seat at the Don Haskins. However as new confirmed cases of the coronavirus continue to spread throughout the country, various organizers and artists have found themselves having to cancel program trips, conferences and concerts as a form of precaution to avoid further contamination. But for Cher fans, attending the packed concert amidst coronavirus fears were not a concern.

“Wash your hands, sneeze in your elbow. We work at a hospital, the flu is killing more people than this is,” said Gallegos, who thinks people should not be concerned about attending large events like these.

Benson and Perrales both shared a similar attitude towards the virus, saying some people are overexaggerating.

The night continued with Cher and her backup singers and dancers performing other hits like her infamous song “If I Could Turn Back Time” from her 19th studio album “Heart of Stone.” The show then concluded with “Believe,” the iconic late ’90s song that departed Cher from her folk-rock style at the time to an upbeat dance-pop style.

Throughout the night, the 73-year-old sported colored wigs and sparkly outfits with bold accessories that have continuously defined her as a woman who does what she wants, which is the exact message she shared with the crowd early on in the show, as she reminisced the day she turned 40.

“For the young women, what I want to say is that you have to fulfill your dreams and do what you want to do,” said Cher. “And for the older ladies, where’s your blue hair?”

Cher ended her speech by asking an ironic question as a sarcastic response to the people who consider her too old to still be performing.

“I just have one thing to say; what’s your granny doing tonight?” the Academy and Emmy Award-winning artist told the audience.

Cher is set to visit 26 more cities in the U.S., including her final stop in Sacramento, California on May 6.