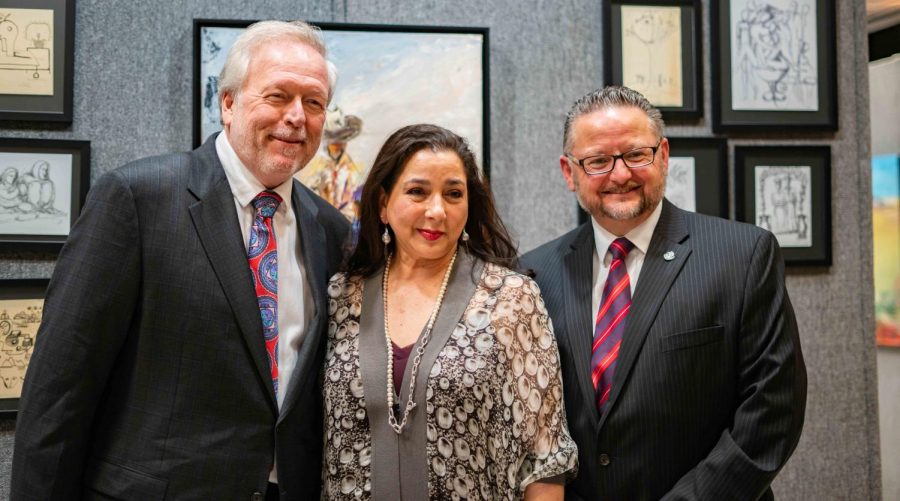 Peraldi’s exhibit, which translates to “Conversations and emotions through color,” is a set of 20 paintings inspired by the emotions and feelings experienced daily. Her mission was to listen to her own emotions and transmit them through brushstrokes and colors, in hopes of  invoking those same emotions to whoever sees her art.

“When you have that picture in front of you, as ugly or beautiful as it may be, I want you to not ignore it,” Peraldi said. “I want you to have a conversation with the picture. I want you to feel what I felt in my heart when I began painting it.”

Peraldi, born in El Paso and raised in Ciudad Juárez, leads an artistic studio on both sides of the border, with more than 30 exhibitions over the years. In her paintings, she captures vivid color, movement and transparencies to express sensations and emotions. The manipulation of proportions and materials seen in her artwork have labeled her as a plastic artist who uses mixed techniques to create a unique vision of reality.

“I work with emotions,” Peraldi said. “I work with all those feelings that happen when we get up in the morning and when we go to bed. I tried capturing them all one way or another.”

The featured paintings are purposely untitled because each spectator is given the opportunity to title each painting themselves based on the emotion and connection they experience while observing it, Peraldi said.

These titles, written on paper, will be collected by Peraldi throughout the duration of the exhibit at the consulate for her to analyze the various internal conversations people had with each illustration.

“I want you to connect with this house right here,” Peraldi said, while pointing at her heart. “Reality and creativity is just that, the return home.”

Peraldi’s exhibit was a collaboration between the Consulate General of Mexico in El Paso and the Centro Cultural Paso del Norte, as a way to support and expose the United States to the rich culture and art found on the other side of the border.

“For me, it is a pleasure to have such an exhibition here at the consulate,” said Mauricio Ibarra Ponce de León, the Consul General of Mexico in El Paso. “I always say that the consulate belongs to all Mexicans. It is a place where we can promote the cultural, artistic values of Mexico.”

“Conversaciones y emociones a color” will be available to the public from 8 a.m. to 5 p.m. Monday through Friday until April 3. Admission is free.