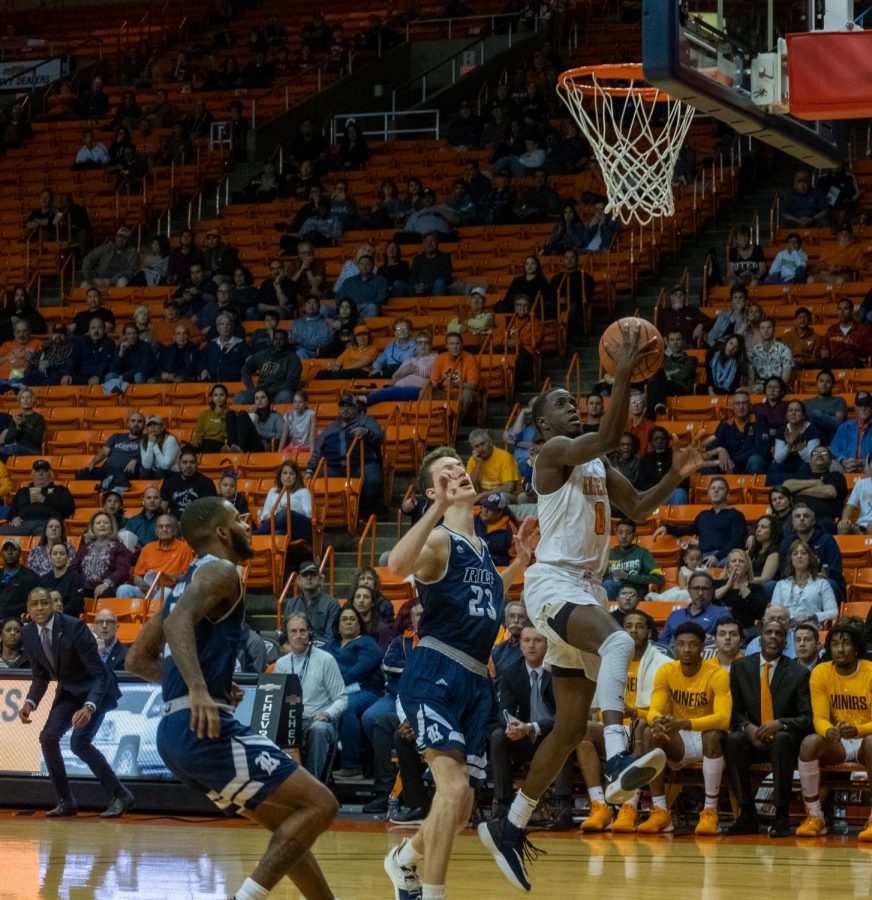 The UTEP Miners (17-14, 7-9) led for all but two minutes of its matchup versus the Rice University Owls (15-16, 5-11) Saturday in a 77-72 victory. Rice is winless versus the Miners in three matchups this season. Clinching the No. 11 seed in the Conference USA tournament, the Miners feasted on the grouping of the four bottom tier teams.

“I’m excited for my guys, the way my guys are playing,” second-year UTEP Head Coach Rodney Terry said. “They have really bought into details. It’s hard when you face someone a second time, a third time for Rice, they had to be locked into the details.”

Continuing his torrid scoring pace for the Miners was senior guard Darryl Edwards who finished with 22 points on the night on 9-19 shooting. Edwards connected on three 3-pointers, once again displaying his prowess from that range.

Rice briefly lead on a jumper after about one minute of play. Sophomore Souley Boum then proceeded to connect on a 3-pointer to give the Miners a lead it would never relinquish. Boum would go on to hit two more shots from that range and lead the team with 25 points on the night.

Once the Miners scored, the team went on a 9 point run and able to take control of the game early. With about seven minutes left in the first half, the Owls made a run and cut the Miner lead to one point. Another 3-pointer by Boum extended the Miners’ lead to 7 points with less than two minutes remaining. A last–second 3-pointer from Rice made it a 30-26 lead for the Miners at the half.

Making a 3-pointer to begin the half the Owls were now within a single point of the Miners and gaining momentum. Boum and Edwards then took over and combined to score the next 16 points for the Miners, giving UTEP a 48-37 lead. Freshman forward Deon Stroud followed up with a layup and foul shot to push the Miners’ lead to 14 points.

With about a minute remaining, the Miners had a comfortable 10 point lead. Rice still fighting back gamely hit a quick 3-pointer to cut the UTEP lead to 69-62. A thunderous dunk from freshman Tydus Verhoeven quickly ended any idea of a Rice comeback as the Miners finished out its matchup with six more free throws for the 5 point win.

Boum and Edwards combined for 47 of the Miners 77 points. As a team, the Miners shot a blistering 52 % from the field in the second half. The Miners dominated in points in the paint with 32 compared to 22 for the Owls. Shooting 39% from the 3-point line, the Miners had a distinct advantage from outside shooting compared to Rice’s 25%.

Although fouling out the game, junior Bryson Williams made his impact known with three blocks and none rebounds. Verhoeven made his presence known with 6 offensive rebounds.

Once again, the Miners shortened its rotation and went with only seven players for the whole game. Sophomore Kaden Archie and Stroud were the only players off the bench for the Miners in the game. Archie had a career–high eight rebounds in 26 minutes of playing time.

“We’re just getting started right now. It was all about the defensive matchups; we knew they were going to small-ball, we had to defend the 3-point line,” Terry said.