Miners’ softball drops two out of three to Louisiana Tech 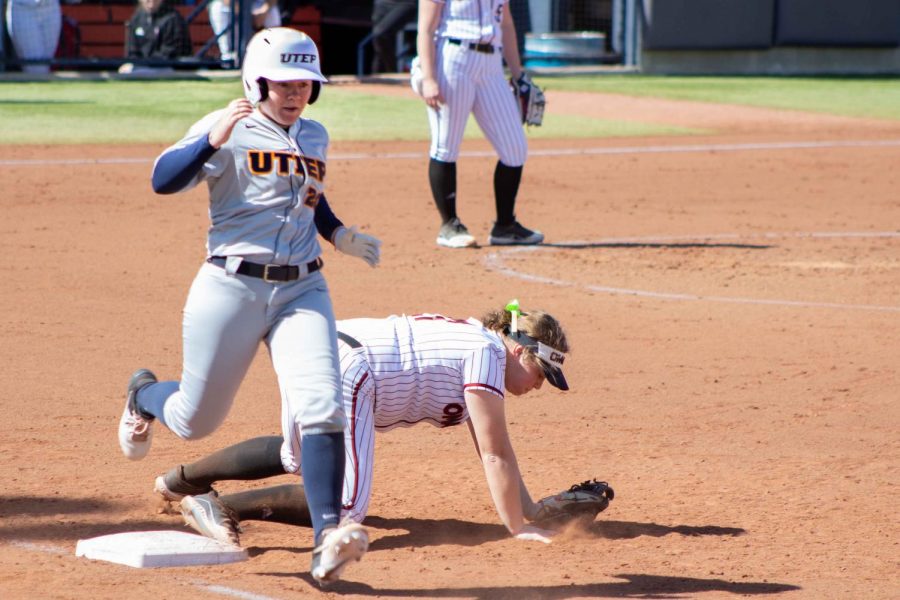 The UTEP Miners (5-17) showed a resurgence of offense in a weekend series with the Louisiana Tech (LA Tech) Lady Techsters scoring 24 runs in three games. Over the past eight games, the Miners have scored an anemic 21 runs, which is less than it scored this 3-game series combined.

In the series opener, senior Pamala Baber opened up the scoring for the Miners with two out a two-run double in the first inning for an early 2-0 Miners’ lead. Freshman pitcher Isabella Kelly then surrendered a solo homer from La tech’s Maddie Green to make it a one-run game.

The following inning sophomore third baseman Kasey Flores connected for an RBI scoring single top extend the lead to 3-1. Squandering a bases-loaded opportunity, the Miners struck out twice in a row to end the second inning.

Both teams went three batters up and three batters down in the third inning. Neither team scored in the fourth inning. After four innings the Miners still held a 3-1 lead.

After a promising start to the fifth inning on a runner thrown out by freshman catcher Isabella Hanson, things started to unravel for the Miners. LA Tech’s Zoe Hicks then stole third putting her team in scoring position, which was followed by a fielding error that led to two scores for the Lady Techsters tieing the game.

UTEP then responded with a three-run inning, which featured back to back doubles, including Baber’s second of the day, giving them a 6-3 lead.

With one runner on base and two outs in the bottom of the sixth, the Miners allowed four straight hits by La tech, which led to a five-run inning. After receiving a walk, the Miners ended its scoreless inning hitting into a double play trailing 8-6.

Trailing by two runs going into the final at bats for the Miners, Baber and Illena Santos were able to score on mistakes by LA Tech, which sent the game into extra innings. Down by one run in the eighth inning, Baber got hit by a pitch to load the bases with two outs. Junior Macey Brown struck out looking to end the comeback and game losing 9-8. Kelly pitched the complete-game loss.

Due to predicted inclement weather for Sunday, the Miners series was changed to a doubleheader for Saturday.

Game two of the three-game series was dominated by the Miners with junior second baseman Ariana Valles and Santos, each having three runs batted in apiece. Freshman Zaydie Calderon pitched 5 shutout innings and allowed only five baserunners the whole game for the 9-0 win.

The Miners jumped out to a five-run lead in the rubber match of the series after three innings with a thundering two-run HR from Santos. Santos’s home run was her eighth of the season, which currently leads the team. Santos is currently sixth in the conference in home runs.

At the bottom of the fourth inning is where things started to come apart for the Miners. Four at bats that resulted in two doubles, a walk and a home run, resulted in three quick runs for La Tech. A third double set up two more runs for the Lady Techsters as the team clawed back to a 5-5 tie heading to the bottom of the inning.

Responding with three singles in four at bats, the Miners loaded the bases in the fourth inning. Valles came through once again with an extra-base hit, which scored all runners and gave the Miners an 8-5 lead. The following inning La tech added one more run to make it a two-run game.

Starting out well at the top of the sixth, the Miners quickly had two outs on LA Tech. Giving up two straight singles and a homer, Calderon could not get any pitches past the LA Tech batters as the Miners fell behind by one run. After a hit batter and a walk, the Lady Techsters added another run to take a 10-8 lead heading into the bottom of the inning.

UTEP could only manage one hit by Baber in the next two innings and came up short with the 10-8 loss.

The good news is that the Miners scored eight points every game in the series while having scored that many points once all season.

Hosting another homestand this coming weekend, the Miners play Alabama Birmingham in a three-game series starting at 6 p.m. Friday, March 13, at Helen of Troy Field with games Saturday and Sunday. Students with valid school ID get into games free.