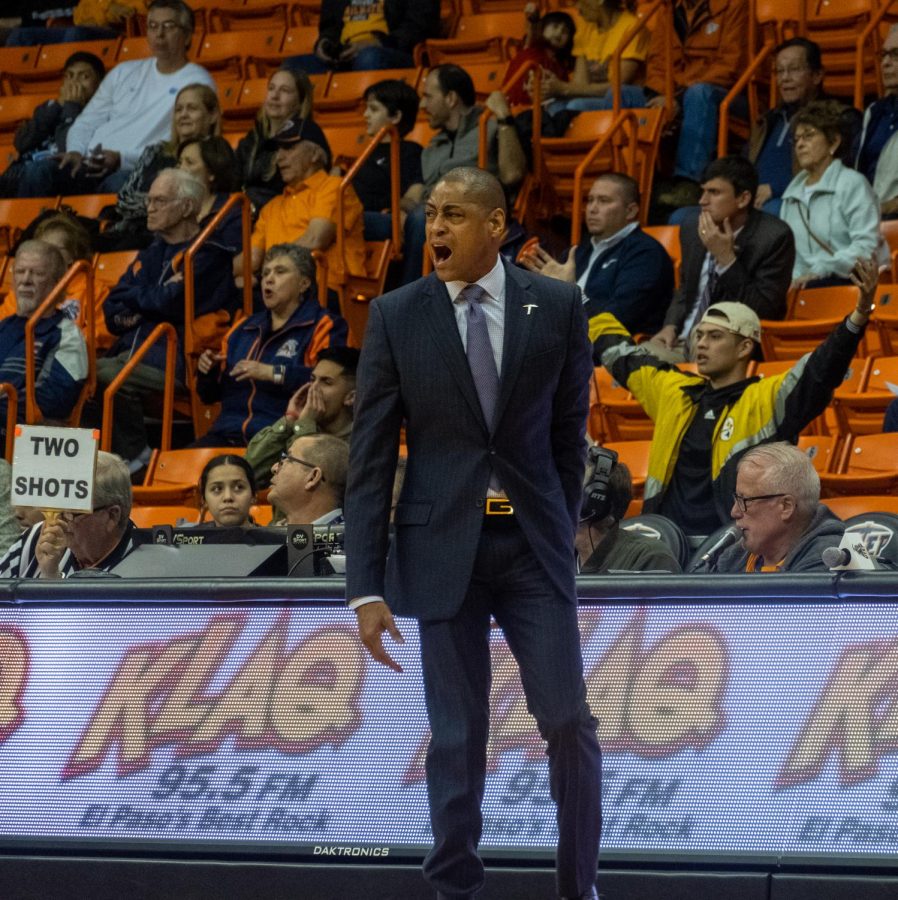 UTEP men's basketball head coach Rodney Terry provides instruction to his players during the game versus Rice at the Don Haskins Center.

The UTEP Miners held on for a close 60-56 road win against the Middle Tennessee State (MTSU) Blue Raiders with another high scoring effort from senior Darryl Edwards. Undefeated in the bonus round, the Miners won its third straight game-clinching a Conference USA (C-USA) Tournament berth.

Edwards had his seventh straight double-digit scoring game in a row with 26 points. Over that stretch, Edwards has averaged 21 points a game, is shooting 51% from the field and is hitting  48% of his shots from the 3-point line.

“Daryl’s playing with a lot of urgency,” second-year UTEP Head Coach Rodney Terry said. “He’s not just shooting threes, he driving that ball and has been very effective doing so.”

Scoring 9 of the first 12 points for the Miners in the first 10 minutes of the game, Edwards continued to be aggressive on the offensive end.

Both teams battled back and forth trading baskets over the first 16 minutes of the opening half with the Miners clinging to a 22-18 lead. Within the next minute, the Miners stretched its lead to 8 points. Over the final three minutes of the half, the Miners went into a scoring drought and played sloppily turning the ball over twice.

At the half, the Miners held a slim 26-24 lead over MTSU. Neither team was shooting well in any aspect of the game to this point.

Coming out of the half, Edwards set the tone hitting a 3-pointer on the Miners’ first possession. Over the first three minutes of the second half, the Miners went on an 8-point run.

With about 10 minutes left in the game, the Blue Raiders had whittled away at the lead and were trailing 44-42. Leading the way in the second half for the Blue Raiders was its best player 6-5 junior guard C.J. Jones who contributed 17 points, including five 3-pointers.

At the six-minute mark, the Blue Raiders tied the game at 50 apiece with a dunk by Reggie Scurry. The Miners’ Edwards once again took the team on his back and hit a jumper on the very next possession, followed by a score off a steal from Souley Boum.

With a minute and a half left the game, the Blue Raiders clawed back into a tie off two free throws. That would be the last score of the game for MTSU. Tied at 56 apiece with 30 seconds left in the game, the Miners would go on to score the last four points via free throws holding on for the victory.

Shooting 54% from the field in the second half, the Miners just could not pull away from the pesky Blue Raiders. MTSU had played the Miners tough at the Don Haskins Center, losing by one back in late January.

Winning only its second road game this season, the Miners seem to be in a rhythm that it has not been in since it entered conference play. The Miners have one more chance for another road win at Rice this coming week.

Providing additional scoring for the Miners was Boum, who finished with 13 points and seven rebounds. Bryson Williams struggled with his shooting going 3-15 from the floor for 9 points but was strong on the boards with 8 rebounds.

“Bryson kept working and got to the foul line and made some big foul shots for us late. It was a frustrating night for him, but his teammates came in and picked him up,” Terry said. “Guys came off the bench and played really well.  This time of year, you need everybody. You need guys to come in and hold it down.”

Freshman Tydus Verhoeven played a career-high 32 minutes with a couple of key blocks and six rebounds. Verhoeven has been a key player in the rotation over the past five games and has been lauded for his defensive intensity and hustle.

Terry has gone with a seven-man rotation over the past couple of games and that seems to be the plan going forward based on bonus play.

The Miners go on the road for its last conference game before the C-USA Tournament noon Saturday, March 7, at Rice in Houston.