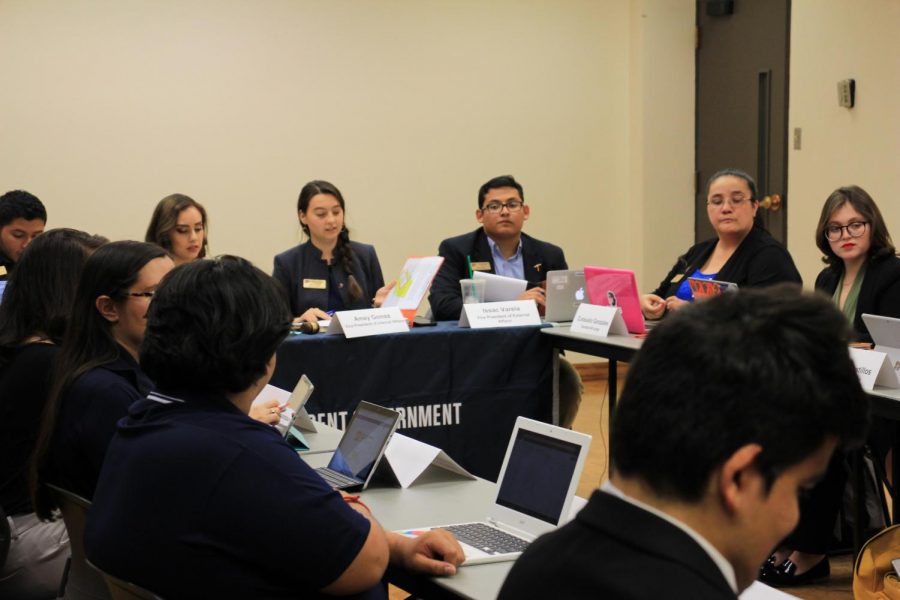 Members of the Student Government Association continue with their itinerary at the SGA meeting on Thursday, Sept. 12, 2019.

A former student unsuccessfully attempted to file articles of impeachment against incumbent Student Government Association (SGA) President Jessica Martinez last semester on the grounds that she was drunk during a general meeting.

The impeachment allegation and its fate

In a weekslong investigation, The Prospector investigated an email sent to three university officials Dec. 13 alleging that Martinez was “publicly intoxicated” during SGA’s Dec. 5 meeting.

Barriga provided The Prospector a copy of this email and it reveals that he sought an impeachment case against Martinez because she “appeared drunk” during the Dec. 5 meeting and that he saw “a video where she appeared taking shots.”

Barriga also provided The Prospector screenshots of a conversation he had with Martinez shortly after the Dec. 5 meeting which show that he asked her if she was drunk at the meeting.

In that conversation, Martinez told Barriga that she had a drink when she went out to eat before the meeting and that the food did not sit well with her.

“Jessica confessed she drank before the meeting,” Barriga said. “Several senators can testify that she stuttered several times during the meeting and that her voice sounded messy, like a drunk person.”

Priscilla Gallegos, the collegiate senator of business, recalled Martinez’s behavior at the meeting.

“I do remember that when she got up to say her report, she had to stand with two legs open because, I don’t know, maybe she couldn’t handle her balance,” Gallegos said. “And then she also said the name wrong of one of the execs. It’s Varela, not Valencia, and you can hear that in the Facebook live if you pay close attention to it.”

Gallegos also heard that Martinez stepped out of the meeting to vomit in a nearby trash can.

“You can kind of connect the dots and think, ‘Oh, maybe she drank a little bit too much,’ because the video shows that they were taking shots,” Gallegos said.

Barriga and Gallegos referred to a Snapchat video taken by Senate Secretary Alexus Padron that shows a handful of individuals taking shots in what looks like a bar.

The impeachment process did not go forward because Barriga failed to properly file the articles of impeachment by not sending the charges to the vice president of internal affairs, McCorry-Andalis said.

“One of the key parts of that is that he, or any student, frankly, has to file those in addition to the advisor of student government with the vice president of internal affairs and he failed to do that,” McCorry-Andalis said. “There were attempts made to get ahold of him and that just didn’t go anywhere.”

However, Barriga told The Prospector that he never heard back from neither McCorry-Andalis, Espinoza-Ortega nor Crouse after he sent his initial email to them.

“Nobody reached out, nor cared to even send me an email to let me know they received the email,” Barriga said. “I didn’t go through the entire process because I graduated from UTEP.”

According to McCorry-Andalis, she responded to Barriga’s request herself via email “prior to the holiday break” and attempted to call the student twice, leaving a voicemail after the first attempt. She said that Barriga still did not respond.

Martinez was not aware that a student tried to file articles of impeachment against her until The Prospector began to investigate.

Martinez said that she felt sick at the beginning of December, but that she continued to go to her classes and attend the SGA meetings.

She explained that on Dec. 5, she and a few senators went to Fool’s Gold, a bar on Cincinnati Avenue, before their meeting to enjoy a dollar taco special.

“We did go there, and I did have one drink, but the food wasn’t settling; I was just not having it,” Martinez said. “And then I came back to Senate and I was still not feeling really well. I talked to Dr. McCorry earlier too and I told her, ‘Dr. McCorry, I’m not feeling well.’ I knew if I didn’t go, I would have to get a doctor’s note and I am not going to the doctor just for a stomachache.”

Martinez said that McCorry-Andalis advised her to stay for the meeting.

The SGA president said that she was surprised that anyone would doubt her character.

“I think it’s all a matter of knowing that I’m responsible and that I really do take my position as the president seriously. I wouldn’t show up to any meeting being impaired, drunk, anything,” Martinez said. “I mean, it’s a genuine concern but I don’t think it was proper to jump straight to that conclusion.”

Martinez said that she actually set an example by doing her duties, despite feeling sick.

“That’s also the expectation, the role model, that I put out. I was able to come when I was not feeling so well, and I did my job; I did my due diligence and then went home after that.”

When asked about the video of Martinez taking a shot, McCorry-Andalis said that that still doesn’t mean Martinez went drunk to the meeting.

“There’s absolutely no evidence on that recording that she’s drunk at all. I actually met with her right before that meeting and I talked to her later on that evening. There was no evidence of that and she did a variety of things that needed to get done,” McCorry-Andalis said. “People can make those decisions. It doesn’t mean they’re drunk. There’s a big difference.”

“If you go on the street and you’re drunk and if a cop pulls you over, you can’t tell them ‘Okay, I did it like an hour ago, it was on my own time, now I’m driving.’ It doesn’t make any sense.”