Feminists fight for change through ‘artivism’ 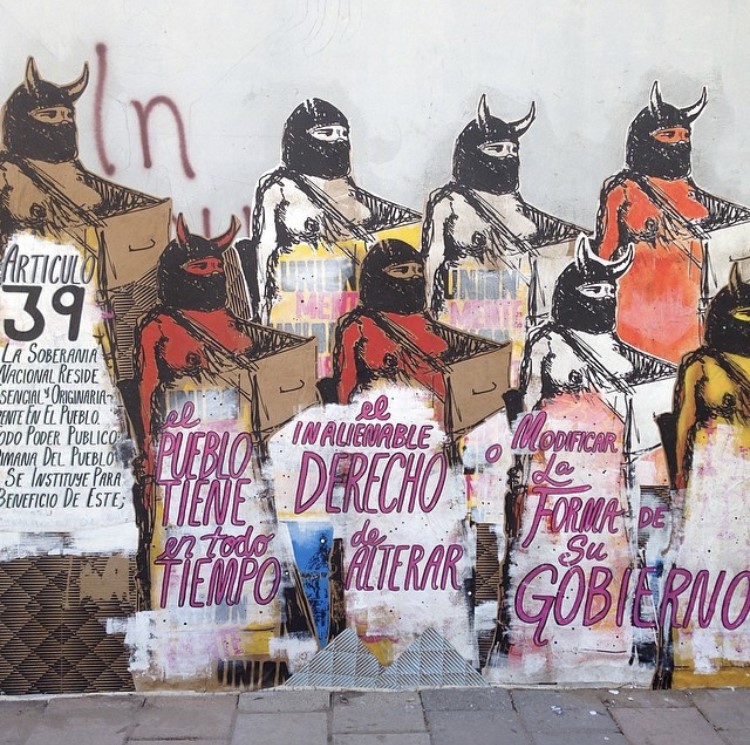 Feminists throughout the world have been fighting for change through “artivism,” an increasingly popular portmanteau that means addressing injustices and raising awareness through creative expression.

“Artivism is a combination of art surveying an activist type of role, where instead of maybe working alone in their studios, they may be thinking how their work impacts the world outside of their studio,” said Vincent Burke, a ceramics professor at UTEP. “It’s making work directly in response to political concerns, personal concerns, but basically (it’s) an art that impacts and tackles broad and cultural issues.”

In the aftermath of the femicide of Isabel Cabanillas De La Torre in Ciudad Juárez, Mexico in late January, many artists have spoken out against the injustice through graffiti murals that depict her name next to phrases such as “Pinto por las que ya no están” which is Spanish for “I paint for the women who are no longer here.”

Many of Burke’s ceramics students created bones honoring Cabanillas and women that have fallen victims of feminicide.

“Artists sometimes take an interventionist approach where they’ll go to important or significant sites and either place their work there in almost a ‘guerilla’ type tactic,” Burke said. “Sometimes they can be testing the laws and putting their works out in public spaces and other times, they’re invited to do so, frankly because artists are seen as agents of change.”

The Guerilla Girls is a New York City-based group that was founded in 1985 and is amongst many feminist artivist groups in the country that have created a voice for themselves through humorous visuals, facts and works that include books, videos and posters, in which they address gender and ethnic bias and corruption in politics, art, film and pop culture.

The group’s members are known for wearing gorilla masks in public to keep their identity anonymous.

The Guerilla Girls also hold interventions and have held exhibitions at museums where they express their dedication to fight sexism and racial inequality in the art world.

El Paso has also seen an increase in artivists like the local art collective “Los Dos” who work in collaboration with visual artists that go by Maintain Studios.

Their artwork can be seen through murals in the El Paso streets of Durangito and Segundo Barrio and in Juárez, often depicting the bond between both cities and the two countries. The collective recently designed a poster for Rage Against the Machine after the band announced its comeback tour.

Rage Against the Machine’s poster depicts an original design of a strong, female figure wearing a black mask with horns, carrying her child on her back.

Within her dress, there is an image of the border wall and the train as immigrants are heading towards the border crossing in hope of a better life.

The poster’s design is dedicated to the border communities, as the poster also displays the dates of borderland cities where the band will be performing at.

“Artists can act as bridges between different facets of the community to raise awareness and impact change in their communities.” Burke said.

The Art of Revolution is an art collective that initiated a social art project titled “One Million Bones,” that took four years to complete and was installed in Washington, D.C. in 2013.

The projects’ goal was to attain one million ceramic bones from all over the world and lay them at the Washington Memorial to commemorate victims of genocide in countries such as Sudan, Somalia, Burma, and the Democratic Republic of the Congo, also serving as a “visual petition.”

Based on the ongoing project that has now been installed in Silver City, New Mexico, Burke didn’t hesitate to share the project with his advanced ceramics class where he had every student conduct research on genocides that have occurred or are currently taking place across the world and create five realistic, human bones commemorating their chosen group of victims.

Burke is planning a one-day trip with his students to Silver City to lay their ceramic bones and become a part of the ongoing movement.

“Part of it was so that they can see that their work can be part of a bigger conversation and help them recontextualize their artworks out of a traditional system and see that art can function in different ways,” said Burke. “They will be exposed to it, they’re going to participate and they’re going to contribute and that’s what’s important to me that they’re contributors, and that they might find that there’s something about that in which it really captures their imagination and become a path for some of them to continue this type of work.”