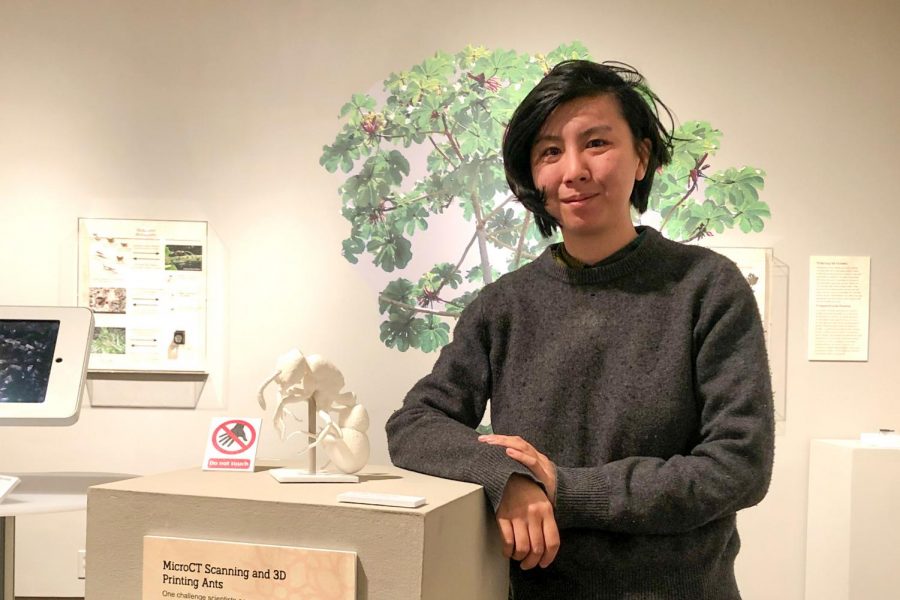 Vicky Zhuang, exhibit curator and Biodiversity Collections Manager at UTEP poses next to a 3D model of an ant on display at the “Tiny Tunnels, Big Connections: Ant Relationships Shape the World,” exhibit at the Centennial Museum.

“Tiny Tunnels, Big Connections: Ant Relationships Shape the World” is the latest installment at the University of Texas at El Paso (UTEP) Centennial Museum and the Chihuahuan Desert Gardens. It was created thanks to a $166,000 grant that the UTEP Biodiversity Collections received from the National Science Foundation in 2017.

The project doubled as a way to archive hundreds of thousands of ant specimens for scientific research while also educating the public about the contributions that ants and their surrounding ecosystems make to our environment as a whole.

Tasked with counting, mapping, and inputting data for nearly 230,000 ants, Vicky Zhuang, exhibit curator and collections manager at UTEP Biodiversity Collections, along with her students were able to input the data into a larger database known as the Symbiota Collections of Arthropods Network (SCAN), which allows museums across North America to keep record of all the taxonomic specimens that they currently have, as well as the information associated with each individual specimen.

“It’s important because we’re making all this data public to scientists, educators and anyone who’s interested in the ants,” Zhuang said.  “Now they can look online and see what kind of ants we have in our museum, where they come from and  their locality, so they can see it on a map.”

The ant specimens were courtesy of William Mackay, a former UTEP professor of biological sciences and the curator of insects at the UTEP Biodiversity Collections. A portion of his collection — an estimated 500,000 ant specimens thanks to over half a century’s work — has now been incorporated into the exhibit.

The exhibit on display involves multiple collaborations. It includes enlarged 3D models of popular ant species in the region, courtesy of the El Paso Community College (EPCC) 3D print center and the W. M. Keck Center of 3D Innovation. The 3D models were sculpted directly from the likeness of the ants themselves via MicroCT scans from Economo Lab in Okinawa, Japan, and the Lucky Lab at the University of Florida. The museum also commissioned Augment El Paso, a digital art company that incorporates augmented reality into traditional printed media and text. Through the Augment El Paso app, the viewer can scan a specific area of the exhibit and watch text and images come to life in real-time on their cell phone or tablet screen.

“It was an interesting element to include because it lends a layer of interactivity to the exhibit,” Centennial Museum Curatorial Assistant Amy Briones said.

Briones also stressed the goal of incorporating a hands-on learning component that is friendly toward kids, an element that is reminiscent of the now-defunct Insights Science Museum that stood in Downtown El Paso for more than 30 years until it was demolished in 2012 to make way for the Southwest University Park baseball stadium. It existed as an interactive science museum full of hands-on activities and displays for children in El Paso to visit.

A jigsaw puzzle of ant anatomy was one of the ways that the exhibit incorporated an interactive display that was geared toward children.

“I loved Insights (Museum) because you could just touch everything. I think that’s the main thing I wish we could do more of, but it’s just really hard,” Briones said. “On some of the 3D models, we have the ‘Do not touch’ sign, just because of the way ants are. They’re delicate things and they have really thin parts. But the compromise was the jigsaw puzzle.”

Although the ant exhibit is more science-geared than the Centennial Museum’s usual lineup of history-based content, Briones welcomes the creative interactive possibilities that science offers.

“I believe that science has a lot more resources than history. History usually just involves the first or the second person or oral history. I believe with this (exhibit), the flexibility in science allows for more creativity.”

As for Zhuang and UTEP Biodiversity Collections, she is open to the possibility of future collaborations with the Centennial Museum.

“Any science exhibit, especially anything involving animals or plants in the area, is something that the Centennial Museum regularly consults with us about,” Zhuang explained. “We have a memorandum of understanding with them. We’re sort of partners in this endeavor.”

The exhibit will continue to be available to view at the Centennial Museum until Aug. 8.