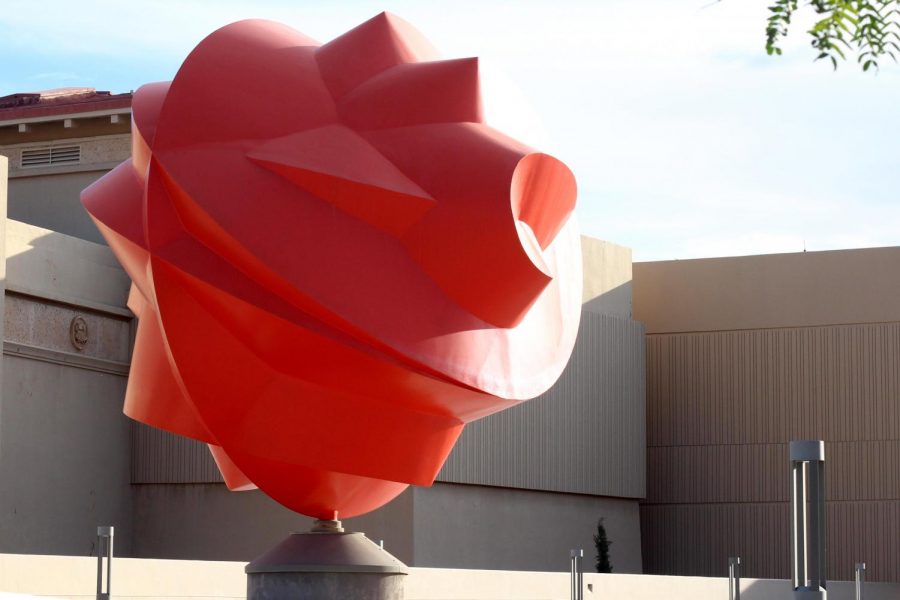 UTEP’s campus aesthetic is not only defined by its signature Bhutanese architecture but also by its vast array of artworks and sculptures scattered throughout campus, both indoors and outdoors, including sculptures, drawings, paintings and Bhutanese tapestries.

Some of these works were either gifted to the university or done on commission by well–known artists specifically for UTEP. The university also periodically offers guided tours dubbed “Art on Campus” where officials discuss the university’s historical background and artwork.

Taking inspiration from UTEP’s Bhutanese architecture, the Chihuahuan Desert Gardens and specifically El Paso’s cloud formations, the artist thought about a metaphor for the changing cycles of nature.

“The Cloud,” which took about two years to make, is composed of thousands of multicolored steel panels, designed to flow with the wind. The artist added an aspect of humor to the piece by creating pixilated clouds inspired by Super Mario Brothers video games.

The visual effect of the sculpture is meant to be interactive by representing the weather, depending on the time of the day and the viewpoint of the observer, which is constantly changing. The project was unveiled Feb. 2, 2016, during a ribbon-cutting ceremony with city and university officials.

Some of Lipski’s artist friends traveled to El Paso from Pennsylvania to attend the dedication ceremony along with other artists from the region. Kerry Doyle, director of the Stanlee and Gerald Rubin Center of the Visual Arts, was also present and said The Cloud is a playful public artwork that depicts a historical and contemporary conceptualization of the Bhutanese aesthetic.

End of the Trail

Located in the Chemistry and Computer Science building across from Starbucks on the second floor, there is a colorful sculpture of a horseback rider with lightbulbs underneath the horse, titled, “End of Trail (with Electric Sunrise)” by acclaimed Mexican American artist and El Paso native, Luis Jimenez.

This glossy sculpture was created in 1971 and the lightbulbs represent sunrise. Jimenez studied art and architecture, receiving a bachelor’s degree in 1964, and soon became an accomplished artist and professor at the University of Arizona and at the University of Houston.

Jimenez became known for his large, glossy, pigmented-fiber glass works and Southwestern themes. Another of his works includes, “Vaquero,” Spanish for cowboy, which is a Mexican cowboy riding a bucking blue horse that became part of the Smithsonian Museum’s collection. Collections of his work can also be found at the El Paso Museum of Art.

Jimenez passed away in an accident in his studio at Hondo, New Mexico where the 9,000 pound, 32-foot-tall sculpture, “Blue Mustang,” fell on the artist, severing an artery on his leg.

Blue Mustang is currently on display at Denver International Airport.

In honor of UTEP’s 100th anniversary dubbed the “Centennial Celebration,” Enrique Carbajal, who goes by simply Sebastián, designed a moquette of the project title, “Tlahtolli,” a Nahuatl word for language or communication, which was gifted by the artists’ foundation and is now displayed outside the Chemistry and Computer Science building.

The project was also gifted to the university as a gift of friendship from the people of Mexico. The red-orange sphere was completed in 2014 and is made of steel.

The sculpture is interactive as people can rotate it. The design symbolizes the historical bonds between Mexico and UTEP..

Carbajal’s abstract–style public artworks are depicted throughout the binational region like the “X” shaped massive sculpture in Ciudad Juárez which stands for the letters in the names Texas and Mexico.

“As good neighbors standing side by side, we will continue to work together to improve the lives of people in our locations, our hemisphere and the world,” said UTEP President Emerita Diana Natalicio in a 2014 article by The Art Avenue titled “Sebastián’s Sphere.”.

UTEP is known to celebrate its cultural bond with Mexico through its public artwork but the university also celebrates its unique, blending culture and relationship with the Kingdom of Bhutan through the “Mandala Sunrise.”

Mandala Sunrise is permanently installed in honor of UTEP’s Centennial Celebration after being commissioned by the university. The artists is Koryn Rolstad, who says the Mandala represents the sand.

Inspired by El Paso’s colorful Latino culture and Southwest landscapes, “with all the colors picked up by the wind into the sky, carrying their wishes and dreams, and turning into a ‘sunrise,’” according to the artwork’s overview.

The sculpture consists of colorful translucent wings that are meant to blend out with the landscape and contains in-ground night lighting through LED that is programmed to change colors. The Mandala is located at the Sun Bowl roundabout by the mountain, allowing ambient light to refract on the surface as a surrounding theme that connects nature and culture to UTEP landscapes.

Nearby the Don Haskins Center is a peculiar sculpture by retired artist Willie Ray Parish that depicts a set of trees intertwined together, causing an eccentric formation.

Parish is a Mississippi native who graduated in 1970 with a bachelor’s degree in sculpture, then he went on to teach sculpture at UTEP from 1984 to 2013, where he also became chairman of the Department of Art.

The piece is untitled, and many of his works are placed throughout UTEP’s campus, such as his sculpture “Millennium Marker,” which is a windmill-like, blue and white sculpture with wings that spin with the breeze.

Millennium Marker was installed in 2015 and is located outside the Health Sciences and Nursing building on the intersection of Wiggins and Rim roads.

Four of the artist’s pieces are located inside the Wise Family Theatre and his works are also featured in collections throughout the country including at the El Paso Museum of Art.

Jaqueline Martinez may be reached at pros[email protected]