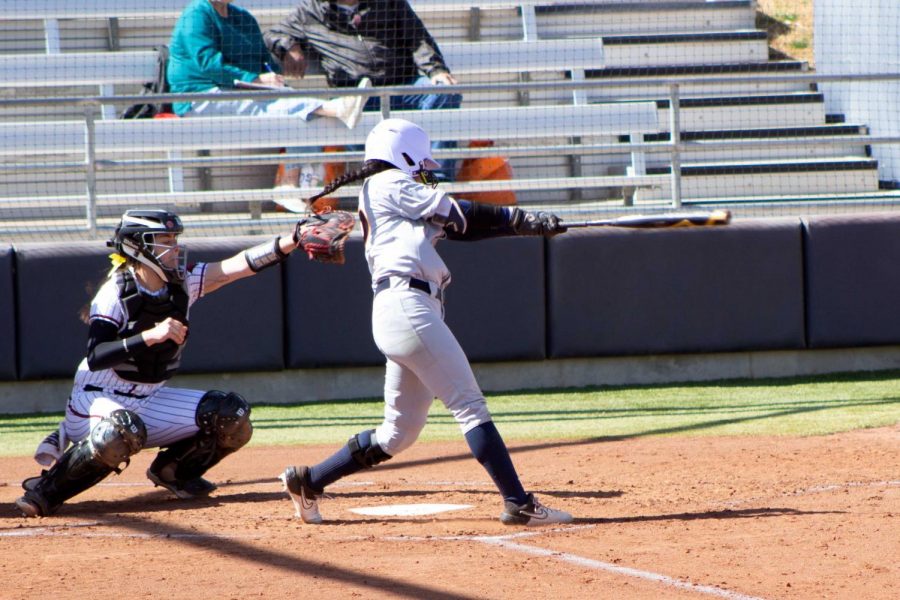 The Miners defeated Indiana University- Purdue University Indianapolis (IUPUI) 6-5 in a walk-off win and Omaha 8-5 after falling to both teams in the first two games of the invitational.

Heading into the UTEP Invitational, the Miner softball team (4-10) held a 2-8 record with four of those losses being stopped due to mercy rule. Now the Miners have won back-to-back games and momentum is starting to build for the squad.

The Miners defeated Indiana University- Purdue University Indianapolis (IUPUI) 6-5 in a walk-off win and Omaha 8-5 after falling to both teams in the first two games of the invitational. Behind solid performances from two standout utility players, sophomore Kasey Flores and junior Ilena Santos, the Miners were able to bounce back from its rough start.

In the first game of the UTEP Invitational, the Miners fell 8-7 versus IUPUI in an extra-inning game despite putting up four runs in the final inning. The game was tied  at 3-3 going into the eighth inning, but IUPUI managed to drive in five runs at the top of the eighth inning to put the Jaguars up 8-3.

Flores earned two homers versus the Jaguars with her solo homer in the bottom of the sixth inning, tying the game up.

In game two of the UTEP Invitational, the Miners fell 13-6 against Omaha after striking first with a three-run homer by Santos in the first inning. The Miners’ bats then went cold as they would not score a run until the sixth inning. The Miners were outscored by Omaha 13-3 in the final four innings.

Senior utility player Pamela Baber went 2-for-4 at the plate for the Miners with a run scored. Baber has  60 hits and seven homers during her career thus far as a Miner.

The Miners bounced back in its third game of the invitational with a 6-5 win from a walk-off sacrifice fly by Santos versus IUPUI. At the bottom of the sixth inning, Santos bombed a three-run homer for the Miners to put her team up 3-0. The Jaguars rebounded and put five runs on the board on four hits to make the score 5-3 at the top of the seventh inning.

Flores and redshirt freshman outfielder Idalis Mendez each earned an RBI single to tie the game 5-5 in the bottom of the seventh inning.

Santos came up to the plate and made a shot that had enough distance to send freshman utility player Zaylie Calderon home and give the Miners its third win of the season.

UTEP avenged its earlier loss versus Omaha with an 8-4 win in the final game of the UTEP Invitational behind a two-homer performance by Flores.

The Miners got on the board first in the third inning with an RBI single by junior infielder Ariana Valles, which brought Calderon and Mendez home and put UTEP up 3-0.

Santos also had an impressive weekend for the Miners with her four homers, 13 RBIs and six hits. Santos now has 20 RBIs and five homers in her Miner career.

The Miners will grace the field again as it hits the road to battle against Houston at 10 a.m. Feb. 28 in the Boyd Rebel Gaming Classic in Las Vegas, Nevada.