The Democratic presidential hopeful reflects on Walmart shooting, promises diverse cabinet, calls for 'Medicare For All' 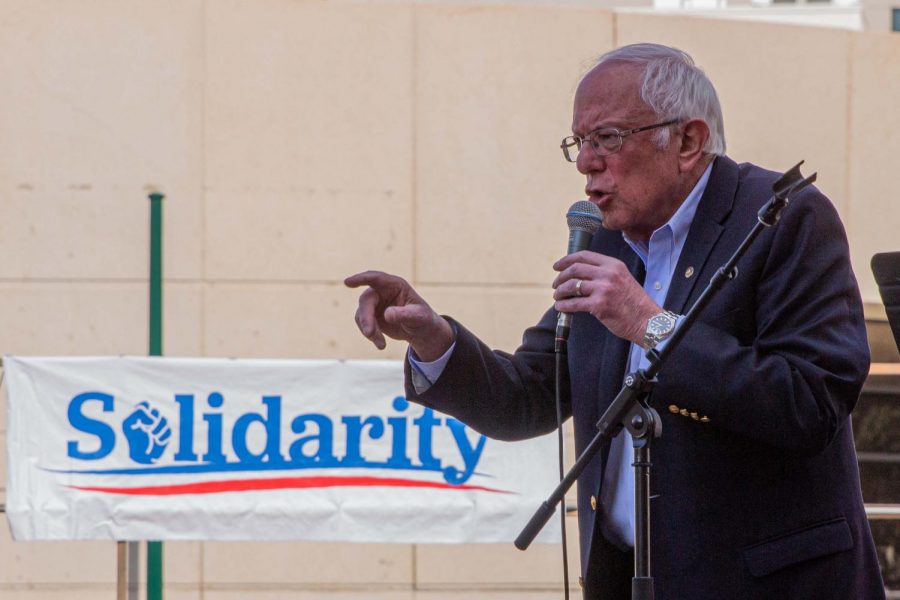 Bernie Sanders address to those who were not able to get into the Abraham Chavez Theater due to overflow.

As Texans continue to cast their ballots during early voting, Democratic presidential candidate, Sen. Bernie Sanders, held a rally today in Downtown El Paso as part of a statewide tour to lay out his campaign’s agenda and make his case for why he is the best Democrat to go toe-to-toe with President Donald J. Trump in November.

Sanders is the second Democratic presidential candidate after Mike Bloomberg to make an appearance in the border city as Super Tuesday approaches and candidates begin to ramp up their efforts in Texas, according to The Texas Tribune.

Throughout the rally, the presidential hopeful repeatedly rebuked Trump and called for several initiatives like immigration reform, “Medicare For All,” a $15 minimum wage, the legalization of marijuana, climate change solutions and even for a diverse presidential cabinet that will “look like America.”

Before his stop at the Abraham Chavez Theatre, Sanders said he visited the memorial in front of the Cielo Vista Walmart that was erected last November to commemorate the 22 victims of the Aug. 3 mass shooting.

“What a horror it is to see that not only was there a mass shooting, there was a mass shooting here just trying to kill Latino people,” Sanders said, also reflecting on the mass shootings at the black church in Charleston and the synagogue in Pittsburgh.

“What we have got to do as a country is do everything possible to end the hatred. We are all human beings with dreams,” the candidate said. “And let me tell you this, that our cabinet, our administration, will in fact look like America. There will be at least one old white guy, okay?”

After Sanders made that remark with a smile on his face, the audience burst into laughter as he moved onto another campaign priority.

“Bernie Sanders is the most progressive candidate for president. That means that our policy priorities align with what so many of our constituents want,” Stout said. “Whether it’s paying people a living wage, to increase representation and protect workers’ rights. We have both made these priorities and Bernie has led the fight on this for years.”

Some supporters came hours before the venue even opened its doors to be a part of the densely packed rally, like John Sebastian Tarín, a student at El Paso Community College who was at Abraham Chavez since 9:30 a.m. Sanders took the stage at around 2:30 p.m.

“He’s been supporting the same issues for a long, long time and I admire that about him. He doesn’t change really anything,” Tarín said. “He seems like an honest politician, more than I’ve ever seen from anybody else.”

Sanders’ consistency as a politician is an aspect that supporters like Tarín and Aurolyn Luykx, an anthropology professor at the University of Texas at El Paso, cite as their main reason for supporting the candidate’s bid for president.

“I think Bernie stands out. I think he has a fuller and deeper commitment to progressive ideals than any other candidate and he’s been doing this work for decades,” Luykx said. “If it weren’t him, I’d probably be going for Elizabeth Warren but right now I feel like Sanders has paid his dues.”

However, a handful of conservatives were outside of the venue to voice their opposition.

“It’s not about left or right or center, it’s about where you are going to get all this money from,” said Art Ramirez, a retired U.S. Marine. “I worked for 40 something years and now you have people who want to take my money. I’m not willing to give up my money.”

As supporters waited in line, a man next to Ramirez held up a banner with the words “socialism leads to communism” next to a picture of Sanders.

On Feb. 19, Sanders announced via his website a weekend of rallies across the State of Texas, consisting of four rallies — El Paso and San Antonio on Saturday and Houston and Austin on Sunday.

Sanders has so far won the popular vote in Iowa, the primary in New Hampshire and the most recent Nevada caucus.