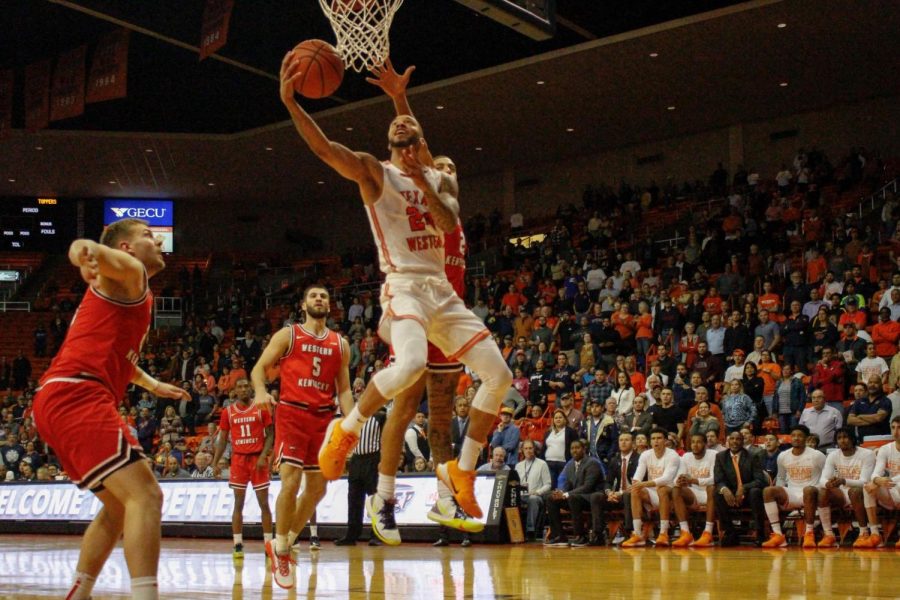 If Miner fans were told that with six regular season games remaining in the season UTEP is going to be at the bottom of the Conference-USA standings that would seem as an outrageous prediction, considering the high expectations this team was placed with.

Well that’s where the Miners(13-13, 5-8) currently are after a 67-63 loss to Western Kentucky (17-8, 10-3) in front of 4,504 fans at the Don Haskins Center and that is a hard pill to swallow for Miner Nation and another chapter in the unsuspecting story this season has turned into.

UTEP found itself down by one (57-56) with 3:34 remaining in the game after sophomore guard Souley Boum made an and-one mid-range jumper and knock down the free throw.

Junior forward Bryson Williams hit back-to-back buckets in the paint in the closing minutes but the Miners were unable to take the lead as Western Kentucky junior guard Taveion Hollingsworth hit a tough mid-range jumper to put the Hilltoppers up six and add to his team-high 18 points (66-60) while breaking the hearts of the faithful Miner fans at the Don.

The Miners dug themselves out of a first half hole after being down by 13 with 9:10 remaining in the first half. UTEP knocked down six straight field goals towards the end of the first half and held the Hilltoppers without a field goal the last 3:25.

UTEP and Western Kentucky are two teams that can defend the three ball but can’t seem to knock down any of its own. That was the case Thursday night at the Don as both teams combined for 13-of-35 from three.

The Miners shot 21% from downtown in the first half. UTEP came into the matchup shooting 29 percent from three placing it second to last in Conference-USA.

“We were just struggling to make shots that’s all on us we just have to shoot the ball with confidence,” Boum said.

UTEP got off to a slow start in the first half going 2-of-9 from the field in the first five minutes. The Miners were held to just one three-pointer out of eight attempts with 9:20 remaining in the second half.

The Miners were led in scoring by  Boum’s 21 points despite Boum being off from where he has been money from this season and ninth in the nation at the free throw line going (4–8).

“ I’ve said to our guys for two weeks now that you can change the whole trajectory of our season just by playing defense and putting consecutive stops together and we’ll find a way to try to score on offense,”  head coach RodneyTerry said.

UTEP takes on Marshall at 2 p.m. Feb. 15 at the Don Haskins Center.