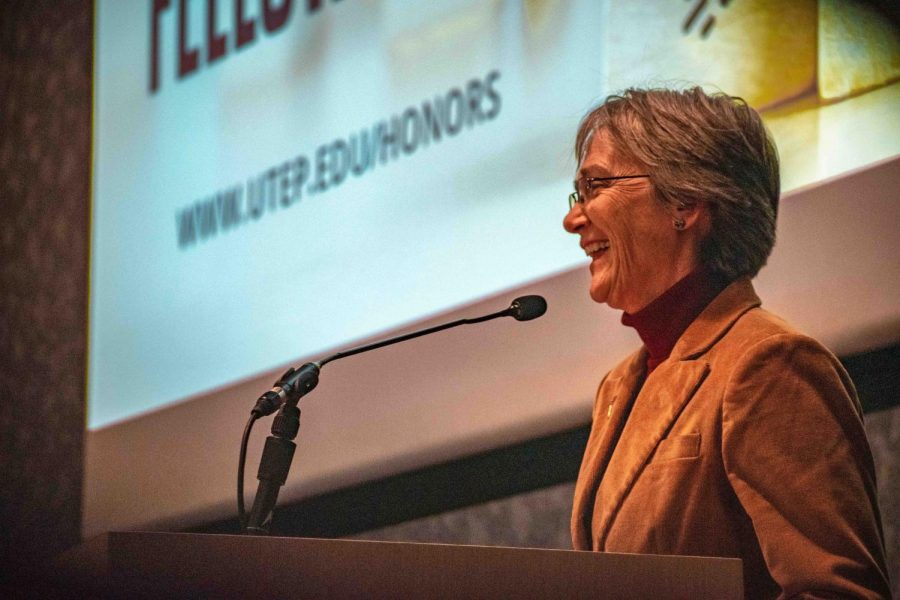 The Hawkins Scholarship is broken down into two scholarships, each worth $10,000 which may be awarded to students in any field, and its name honors First Lieutenant William Deane Hawkins.

“Hawkins graduated from El Paso High School when he was 16 and was awarded a scholarship to attend Texas College of Mines (now UTEP), where he studied engineering. After the attack on Pearl Harbor, Hawkins joined the Marine Corps,” said a pamphlet handed out during the event. “In November 1943, Hawkins successfully led his men into action against Japanese-held Tarawa located in the Gilbert Islands. He was killed in action during this effort. He risked his life to accomplish the mission and inspired his comrades during the most crucial phase of the battle. Hawkins was posthumously awarded the Medal of Honor for his heroic acts above and beyond the call of duty.”

Wilson spoke about how UTEP students have the potential and the intelligence to compete with the best students from other universities, even if the students themselves don’t believe so.

Qualifications include students of “outstanding intellect, (who) are committed to the service of others and who show promise of becoming leaders capable of addressing important challenges facing humanity.” It is meant to help pay students’ tuition, fees, room and board, books and other educational expenses, including study abroad experiences or other programs that enhance their education experience.

To become a Hawkins Scholar, students must be:

Undergraduates who intend to apply and attend graduate school in the fall of 2022
At least 17 years of age and must not be 23 or older by October 2020
Must have completed an undergraduate degree at UTEP no later than July 2022
Have a GPA of or above 3.7 on a 4.0 grade point scale
Can be citizens of any country

To learn more about the Hawkins Scholarship, visit its website.